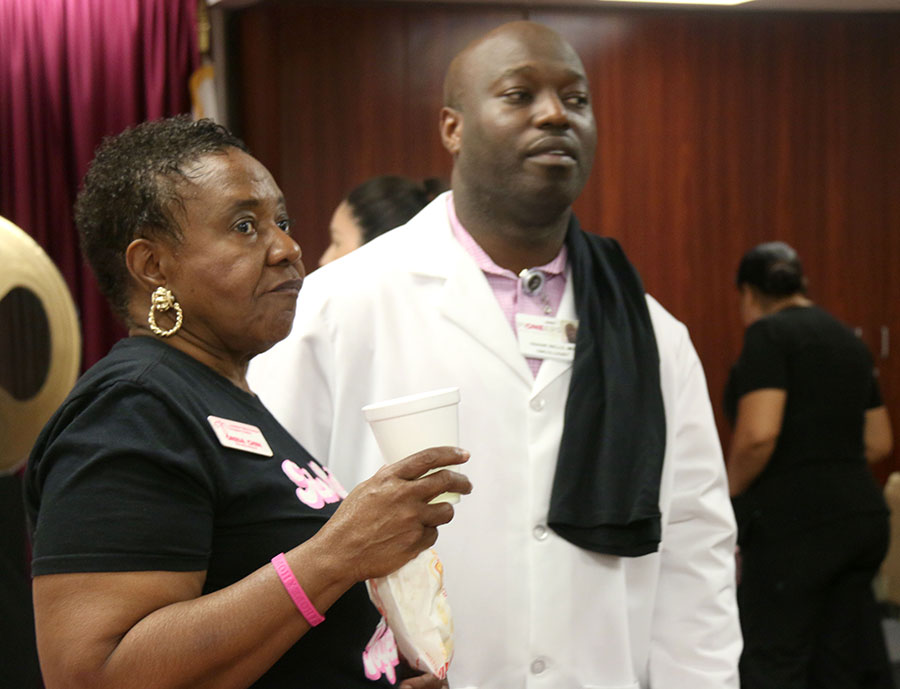 One of the most frightening things to confront is a cancer diagnosis yet it can be overcome with the aid of a compassionate doctor and the support of those close to a person.

For Sister Maria Adela Amoroso, of the Our Lady of the Victory Sisters, that community included those at the Sister Evelyn Mourey Center, an El Centro-based charity. Now in recovery, Amoroso was nurtured initially by physician Arsinur Burcoglu-Oral of the Pioneers Memorial Healthcare District’s Cancer Institute.

She faced an aggressive stage-three breast cancer that had spread to her lymph nodes. Perhaps as much as the critical therapy Burcoglu-Oral prescribed was her dedication to her patient, emphasized by the hug she gave Amoroso at her diagnosis that helped ease her pain.

“I was really shocked at first. I thought ‘How could this happen to me?’,” remembered Amoroso.

That was in March 2017 when Amoroso started a regimen of radiation and chemotherapy every three weeks that was completed that October. But Amoroso, 68, had done everything correctly, even getting a mammogram every year. What’s more, she had no family history of cancer, no warning signs before her diagnosis and no incidence of pain.

At the fourth annual Breast Cancer Awareness event on Oct. 3 at the Pioneers auditorium the Imperial Valley community came out to be informed about women’s healthcare options and how to navigate their cancer journey. Sponsored by the Radiology Department, the event had resulted in 16 mammograms being scheduled by noon and hopes are the event grows bigger each year, said Bobby Lira, district radiology manager.

It was from a fellow patient at the Pioneers Cancer Institute that Amoroso heard about the event and agreed to share her experience. One of her primary supporters was Sister Maria Luisa Valdez. She assisted Amoroso every step of the way as chemo sapped her energy and left her weakened and listless.

Although Amoroso completed chemo, she still must see her oncologist every few months. She is still limited in what she can do since she has neuropathy (numbness) in the hands and feet.

“I’m doing much better and recovering,” said Amoroso. “I’m excited my hair is growing back. I’m back with my congregation and continuing my ministry.”

Some advice Amoroso passed along is take away the fear from cancer patients. Vital is outreach to a network, and for Amoroso that started with Valdez.

“We supported each other and when she went for treatment I went with her because it could take five hours,” Valdez recalled. “As nuns we’re supposed to look after others. That’s what makes us unique in a way. But I never talked to her about God. Mostly I listened. I knew her pain came from within.”

The hub of support kept circling back to the congregation, most notably through the values the congregants expressed that overwhelmed Valdez and Amoroso to share their congregants’ empathy with others.

“It’s called charisma–the rare charm held by someone that makes others want to follow,” said Valdez. “I want to urge all people to nurture one another with whatever it takes. And for Maria Adela, there were others: Carol Rascon, Frances Lopez and her brother, an oncologist in Bolivia, phoned to offer encouragement. Maria Adela has tremendous faith.”

Amoroso’s oncologist, Osagie Bello, was the event’s keynote speaker and explained cancer can often require several treatments and that is why a team of physicians must be engaged. For prevention, annual mammograms should start at age 40, especially for those at risk with a prior cancer episode, family history of cancer or a positive biopsy. Others may start at 50.

“Follow up on results,” he emphasized. “Sometimes a doctor recommends an ultra sound (medical imaging) or a biopsy. That’s how you know what you’re dealing with. Then you can check it under the microscope.”

Along with mammogram appointments, visitors also checked out the Imperial Valley Cancer Support Center booth. Among its various services, the nonprofit provides prosthetics and wigs at no cost to empower cancer patients to keep fighting.

Oreda Chin, center executive director, steered visitors to an American Cancer Society brochure on self examination. She stressed the importance of women knowing how their breasts look and feel normally, which is why self-exam is recommended while showering. Symptoms to look for are a lump or mass that may not be painful, skin irritation or dimpling, redness, scaliness, excessive warmth or itching.

“The take away,” Chin stressed, “is for people to continue to have breast exams, but not just at 40 because breast cancer can occur at any age. Breast cancer is the most common invasive cancer among women worldwide. Start self exams. Awareness, that’s the biggie.”