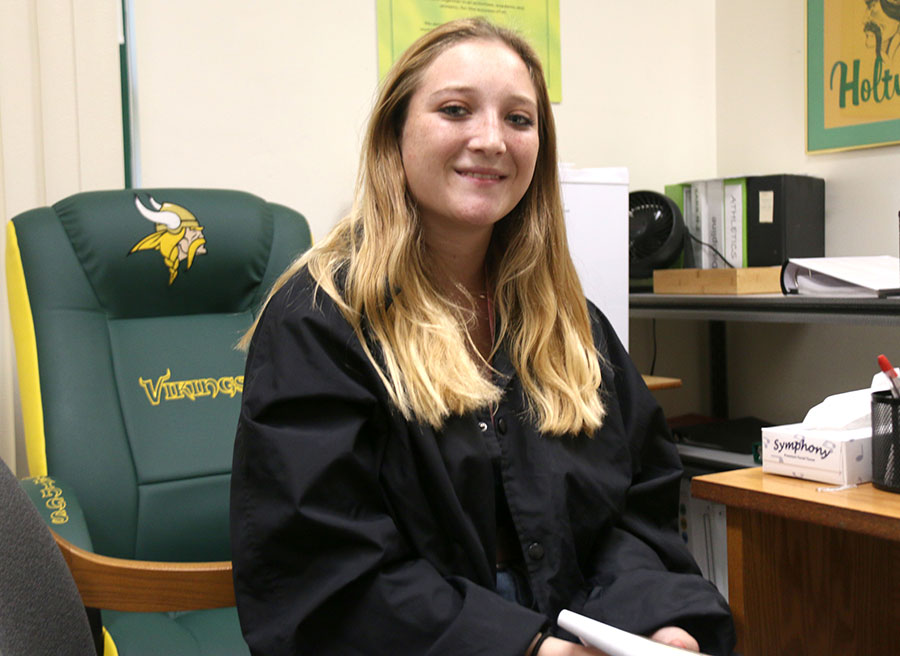 A Score for Gender Equality: Girl Kicker Proves Worth for Holtville High

Although barriers still exist among genders that keep women from attaining the same opportunities of their male counterparts, the gap is narrowing. Such is the case on the Holtville Vikings football team, a sport almost exclusively for males, where kicker Anne Britschgi is going toe-to-toe with male teammates and proving her worth through stellar performance.

Anne, 17 and a senior, began training during the spring football season, showed her mettle and is currently the starting point-after-touchdown kicker for the Vikings varsity team. Standing about five-feet, eight-inches tall and maybe 130 pounds, Anne is a tad spare for even high school football.

“When I look up to line up my kick, it’s always the biggest guy in the center of the defensive line,” Anne said confidently of her approach. “But it’s only intimidating for a few seconds. When I take my first step to the ball, I forget about it.”

Given the Vikings’ prolific offense, she has had plenty of opportunities. Anne is the top PAT kicker in the California Interscholastic Federation-Southern Section. She has scored 13 points this season, six ahead of second place Jose Monge of Vincent Memorial School.

She first spoke to football head coach Jason Turner in the fall of 2018 and started kicking during spring football training.

“But nothing is guaranteed yet she could try out for a spot,” said Johnston. “She worked hard all summer practicing her kicks. Who is ever the best person for the job and contributing to the team, and so far, she’s performing for us.”

As far as doubts about a female playing a traditionally male sport, there has been no objection from anyone in Holtville, Johnston assures.

“Maybe some players from the other schools were a little surprised when shaking hands,” said Johnston. “Hopefully, she’ll kick her way to a CIF championship, her and the other players.’

The Vikings are 6-1 on the season.

Anne has played soccer since she was seven and played three years as a Viking left wing forward and also plays centerfield for the softball team.

“I’ve always had aggressive energy and I’d take it out in sports,” she said. “I was criticized for small size when young. People will tell me, ‘Oh, you can’t take a hit’ and they tell me that now in football. I haven’t got hit, but that’s always a possibility.”

Turner has declined to have her punt the ball on fourth down situations in order to avoid potential injuries. But it also preserves Anne’s health as she prepares to return to the girls’ soccer team in November.

Standing Behind Their Teammate

Still, some doubts in the community persist. Despite the school district basing its decision on merit there has still been some roughing of the kicker coming from social media. Individuals have commented, ‘How could you (Anne) do this? This is a man’s sport’, according to Anne. Yet her Viking teammates stand behind her.

“We can make jokes with each other now,” said Anne. “But at the beginning of the season I was timid to talk to some of the other players. But it really comes down to being like a family.”

Anne said her teammates sometimes are approached with questions such as, ‘Oh, what do you think about Annie? But come game day there is no question of her abilities.

“I still get nervous because my spot can always be taken,” she said. “I’m glad I got the opportunity to do it. It brought me out of my shell. But Coach Turner told me, ‘I’m going to treat you like the other players … but I’ll also like to treat you as I would my daughter.’”

Despite a sluggish start, nearly forfeiting a commanding lead in the season opener against Salvatierra Institute, and then a dressing down by Imperial High Tigers, a bigger school, the season has turned a corner with an impressive 40-0 win over much larger Calexico High on Sept. 27 and Turner noting the defense is strong but still needs to defend against big running plays.

Focused On The Task At Hand

Anne, meanwhile, focuses on her task.

“When I kick, I focus on the uprights and not the defenders,” said Anne. “If I don’t set my mind right I’ll miss a scoring opportunity. But at the same time putting too much thought into a goal attempt can ruin my effort.”

When first approached by Anne, Turner recalled he told her, “If you can kick the ball, we’ll give you a chance, absolutely.”

He added, “She’s put the work in since spring football. And now we’re seeing the results. We don’t look at it as a novelty. She’s one of the players”

Viking teammate Danny Gutierrez, PAT holder for Anne, noted she has a good attitude but was a little scared at first about getting hit.

“Now she’s really come into her own about it,” said Danny. “She’s got leg. She’s played soccer all through school. She’s had some injuries, but she’s been really good about it.”

Anne sees the team as pretty strong now. “We love to mess around, but we always get down to business,” she said. “Everything we do, we prove it to people on Friday nights.”

Next
Holtville Vikings Gain Momentum with a 62-6 Win