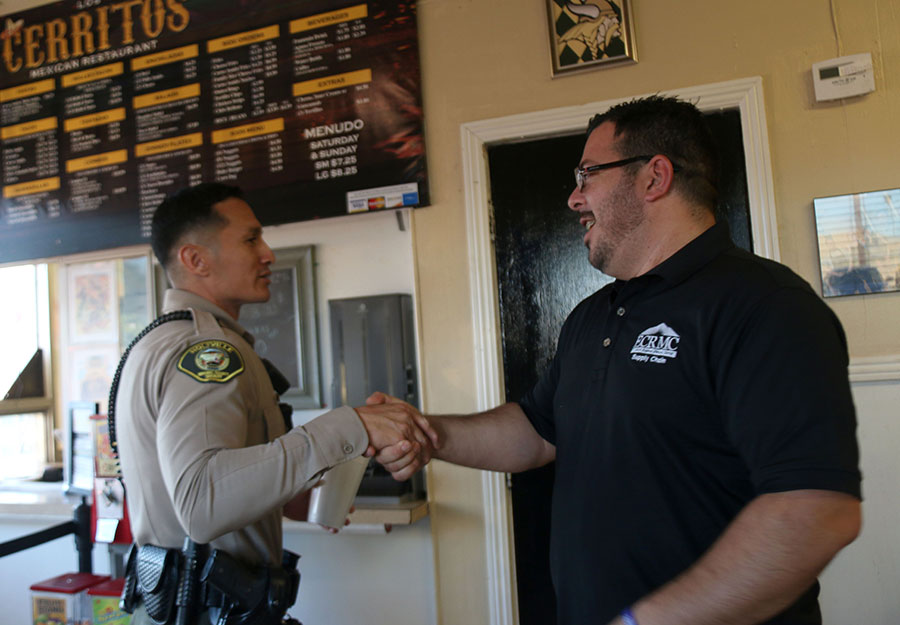 Knowing just what he wanted to do to augment his income a Holtville resident took over the lease of an established restaurant and is turning residents into a steady fan base of this budding eatery that goes way beyond basics.

Los Cerritos (little hills) launched in January almost on a whim by Jerry Cerros, who also works full time as a buyer for the purchasing department at El Centro Regional Medical Center. After viewing an ad on social media, Cerros appealed to his wife, Adriana, to get into the restaurant business.

“I saw the ad on Facebook Thursday, went shopping for new items on Saturday and by Monday I was open,” said Cerros. “I got three kids, three hills up there so, that’s where the name comes from. It’s similar to other Mexican restaurants in town but we try bringing something with a difference.”

A hot-selling menu item, literally and figuratively, is the carne asada burrito with Flamin’ Hot Cheetos cooked inside. Known as the “ulcer,” Cerros runs through a lot of Cheetos with his clintele.

But what is perhaps most audacious is Cerros came into the business with no prior professional culinary experience, though he obviously has a flair for the hospitality profession.

Adriana, who manages the business, admitted it took several months to get acclimated. After June and July hit with a slow time, customers have begun to flock for not only the barbacoa but also shrimp burritos. Adriana naturally gravitates toward customer service.

“I know many of the customers and I like to talk to them,” she said. “There’s only a few restaurants in town and people are giving us a try. I think the next months will be especially good with more field workers returning to the farms.”

“I get some menu ideas from social media but we’ve always done a lot of cooking at home. But now with a restaurant we don’t need to cook at home anymore, just order,” he joked.

Business is typically bustling on weekends but Mondays can be slow so that is when Los Cerritos often runs a special. Regardless of the day, busy or not, their signature dishes always contain daily fresh ingredients.

“I came into the restaurant with no income. It was a quick sprout–let’s do it,” recalled Cerros. “We waited two months to hire. Now we have four employees. I think there’s potential in this business with consistency, making sure I’m always ready for our customers. I know we have a lot of support from Holtville. I just had faith something was going to come through.”

Spreading The Word Through Social Media

Almost immediately Los Cerritos posted ads on Facebook, Instagram and Snapchat and business began to blossom. Even colleagues from ECRMC patronized the restaurant and were especially encouraging.

“They wished me a lot of luck because they know how hard a restaurant business is, but everything is progressing well,” said Cerros. “We got a new sign, did some painting to give it a new look. We’ll start soon with delivery.com (app). But we’re looking to host the Holtville Car Club out in the parking lot.”

Located In The Heart Of Holtville

Perhaps the best testimonial is a customer who made the transition from the former restaurant to Los Cerritos, Jose Romo, a retired zanjero.

“I especially like to visit on Sundays for the menudo. It’s an acquired taste,” he said. “And as long as somebody provides a good product you’re going to come in. This is a plus for the community.”

What Cerros said he likes best with the new business is customer service.

“We’re succeeding with a new challenge in life. People say a restaurant is pretty hard. But I wanted to try it on my own,” he added.

Previous
Connecting through Crepes and Coffee at Hope Café

Next
A Score for Gender Equality: Girl Kicker Proves Worth for Holtville High