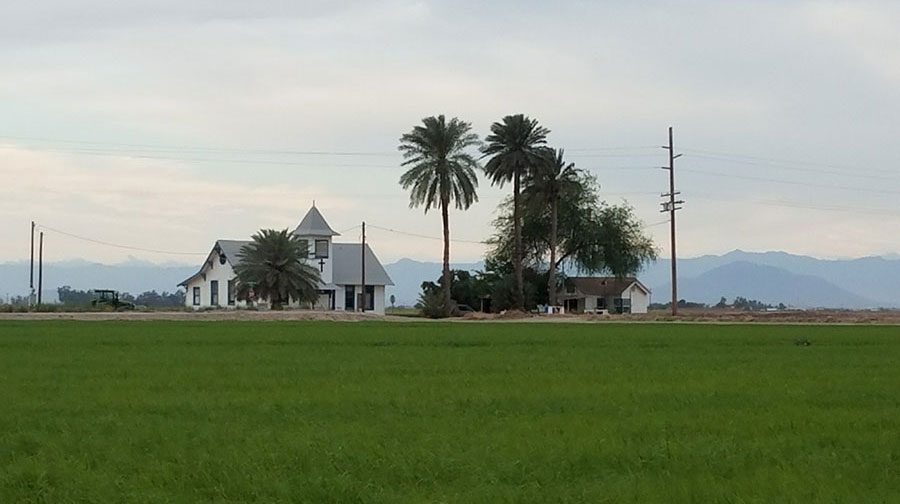 After more than a century in existence, the historic North Holtville Friends Church held its final worship meeting in June, when Pastor Michael Allen decided the time had come to close its doors because the congregation had diminished to such a small size.

“We all saw it coming,” Allen said during a recent interview. “I gave Wanda (Layton, church treasurer,) the letter the month before and she read it to the congregation. We wanted it to continue. Every person there was a friend — true friends and friends to one another.”

Layton, who was a member of the Quaker church for some 50 years, remembered it as a wonderful little country church.

“We sure hated closing the church down, but there’s so many institutions in Imperial Valley going through a similar experience,” said Layton, whose late husband, Charlie, was a member for more than 60 years.

The stately white building with blue trim was built in 1907 and still stands at its original site at 1595 Blodgett Road. Back then it was surrounded by family farms and most people got around by horse-drawn carriage, Allen explained.

The pastor, whose grandmother was a loyal parishioner for decades, said the church’s demise is more attributed to a change of perspective over the generations. Younger people are more introspective and individualistic than in previous decades, he said. In 1907, people had to bond together in order to survive.

“My grandmother was born just down the road, and it was the first church she went to,” Allen said. “Her parents, pioneers from Kansas, helped build the church. But during World War II, a lot of people moved to cities to work in the defense industries. Then, after the war, people wanted to live in town (what is now the city of Holtville).”

The war was a watershed moment when life was changing dramatically, Allen noted. He said there were lots of good churches in Holtville proper, and the North Holtville Friends Church began to lose members as people moved away from its rural confines.

“A church serves the community it’s in,” he said. “In North Holtville, there were fewer people residing there after the war. But in 1907, there were a couple of stores and even a school, the Eastside School (near the church). … The community moved on, yet the church remained. What kept it going was the children and grandchildren of the pioneers who settled the Imperial Valley.”

In recent years, walking into the church was like stepping back in time 100 years, Allen noted. Rich in history, Allen said the church’s first minister was Albert Wright from Toronto, Canada, who arrived in the desert for health reasons.

Although pastors came and went, little about the church changed. A parsonage was added in 1909, and a basement and classrooms were added in 1917. In 1922, acetylene lighting was donated, then the next year a water supply for the parsonage was added. The entire church was given access to water by 1927, and finally electricity arrived at the building in 1938.

Allen’s parents did not attend church regularly and he was not in the habit of attending either until 1992, when his grandmother began to suffer from senile dementia, and he wanted to spend as much time with her as possible.

Allen later had an epiphany, which he described as a spiritual awakening, when a friend urged him to hear Pastor David Hocking at Imperial Valley College.

“I’m sure glad I went because I heard the gospel all my life but never thought about my relationship with God,” Allen recalled. “It definitely changed my life for the better and gave me a reason to live for something bigger than myself.”

Allen earned a degree in English from San Diego State University-Imperial Valley campus, and he eventually married his wife, Erica, in the North Holtville Friends Church. But it wouldn’t be until years later that he found himself come full circle, back to the little Quaker church.

He said when the former pastor vacated his ministry, Allen volunteered to step up to the plate. Following a couple of semesters at Calvary Chapel Bible College in Murrieta, Allen was licensed to perform marriages but never received his recording (Friends Church ordination). It was motivation to serve the congregation that spurred Allen on to finish his ordination, and it was friends and family that prompted Allen to find spiritual uplift in a familiar sanctuary.

Memories Will Live On

The church has been closed for several months now, but Allen hopes its memory and the building itself can survive. Recently, he said a letter was sent to Pioneers’ Museum about donating the church. He said the museum is still weighing the feasibility of the offer because it would be very expensive to move, perhaps $200,000, Allen estimated.

“We celebrated our 100th year anniversary in 2007 and the building was packed, people spilling out the door,” Allen recalled. “The church fostered a firm sense of commitment and obligation to the community.”

Church treasurer Wanda Layton recalled some of her fondest memories of the North Holtville Friends Church, including celebrating Easter sunrise services out in the desert by the Highline Canal, followed by breakfast, and potluck dinner every first Sunday of the month with particularly memorable dishes provided by Erica Allen.

“It was always a loving place to go, always a welcome,” Layton said.