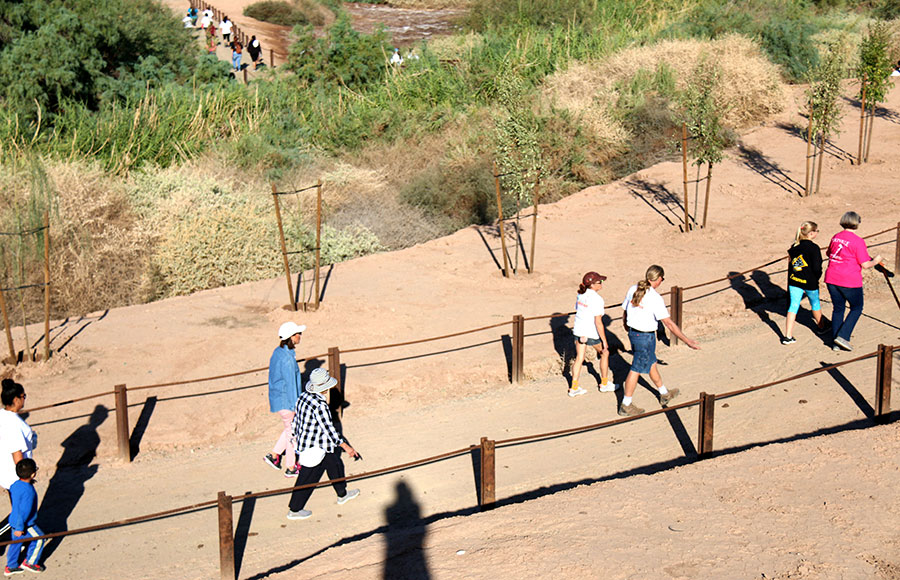 The event also marked the celebration of the expansion of the trail that occurred at the beginning of the year, Holtville Fire Chief Alex Silva explained.

The trail features a loop around wetlands in the area that leads back into town after ducking under the Orchard Road bridge. Firefighters helped hikers register for the event and distributed free “Walk the Trail” T-shirts.

“We ordered this nice weather for you — that’s a little bit extra,” Silva joked as hikers assembled at the starting line at the city’s skate park. “But this is not a race. You can help us plant the first three trees going in this morning.”

Nick Wells, Holtville city manager, was on the trail early just south of the Orchard Road bridge planting the first of 150 trees distributed to Holtville. Some 130 will of the tree will be placed along the trail.

“Cal Fire (California Department of Forestry and Fire Protection) provided the grant (that helped obtain the trees),” Wells said. “El Centro applied for (the grant) and got a couple of other cities involved.”

One of the first residents to kick off the 1.2-mile hike was Helen Wilson, an active member with of the American Legion Auxiliary Unit 138.

“I’ve walked the trail before and rode it by bike,” Wilson recalled. “Some of the hills can be challenging. The first time on my bike, I got off and pushed it up the hill.”

“Ashlee really wanted to do it,” Collins said. “Her parents are working, so I said I’d do it. I go to Planet Fitness a lot, so this is a little extra bonus.”

Ashlee had been practicing for the trail hike the week prior by walking with friends from the Samaha Park Babe Ruth Little League field to Finley school each day.

“I liked it,” Ashlee said after completing the trail walk. “It wasn’t tiring because we hiked the mountains (east of Julian) this summer.”

Following the early-morning walk, a health fair was held in Holt Park. One popular exhibitor there was Vince Zazueta, school garden manager at Harding Elementary School in El Centro and the owner of Vince’s Backyard Market Garden.

Zazueta provided half-pint milk containers for visitors to produce their own starter gardens on site. He brought the four essentials for gardening — potting soil, seeds, water and, once his visitors stepped out of the shade, the all-important sunshine.

“We’re trying to be healthy, that’s the push behind this,” Zazueta said. “We’re encouraging everybody to reuse and recycle. But also incorporate the whole environmental system and make the connection between the environment and a healthy community. It all goes hand in hand.”

Diana Peacher, founder of the nonprofit Cancer Resource Center of the Desert, was enthusiastically planting marigolds and sunflowers.

Although she does not consider herself a fanatical gardener, Peacher said she does like to get her hands dirty growing sage, basil, oregano, rosemary, cilantro and mint for her Italian and Mexican recipes. She said she expected to transplant the starter plants she purchased at Zazueta’s booth at home.

“I use the rosemary with my chicken; it’s so yummy,” Peacher said. “And I loved Vince’s rule of thumb, digging twice the depth of the size of the seed to start your plants.”

At a neighboring booth was yoga instructor Laurie Zazueta Pariani, who led visitors through a brief class of yoga exercises. Pariani was visiting from Claremont, where she teaches yoga. She informed visitors about the ease of stretching and moving through proper yoga postures to attain health.

“We want to provide alternatives for new awareness,” Pariani said. “You don’t need a gym. With yoga, you can modify it according to your own body type.”

Alejandra Quezada, who hiked the trail with her husband, Brigido, and their four children, tried a yoga workout with Pariani for the first time.

“I used to play baseball and soccer until I got married,” Quezada said. “But I like to have my kids stay active, I’m an old-fashioned mom. I think this (yoga) was good. Maybe I’ll take it up later so long as I can fit it into my schedule.”

Fire Chief Silva noted the fire department participated last week as part of the national Walk to School Day, celebrated by most schools on Oct. 2. The goal is to raise awareness for the health, community and environmental benefits of regularly walking to school. More than 4,100 schools had registered events on Walk to School Day.

Silva reminded residents to continue to “walk the trail” and seek out opportunities to engage in healthier lifestyles.

Previous
November Election a Little Fish; Whale of a Vote Coming in March