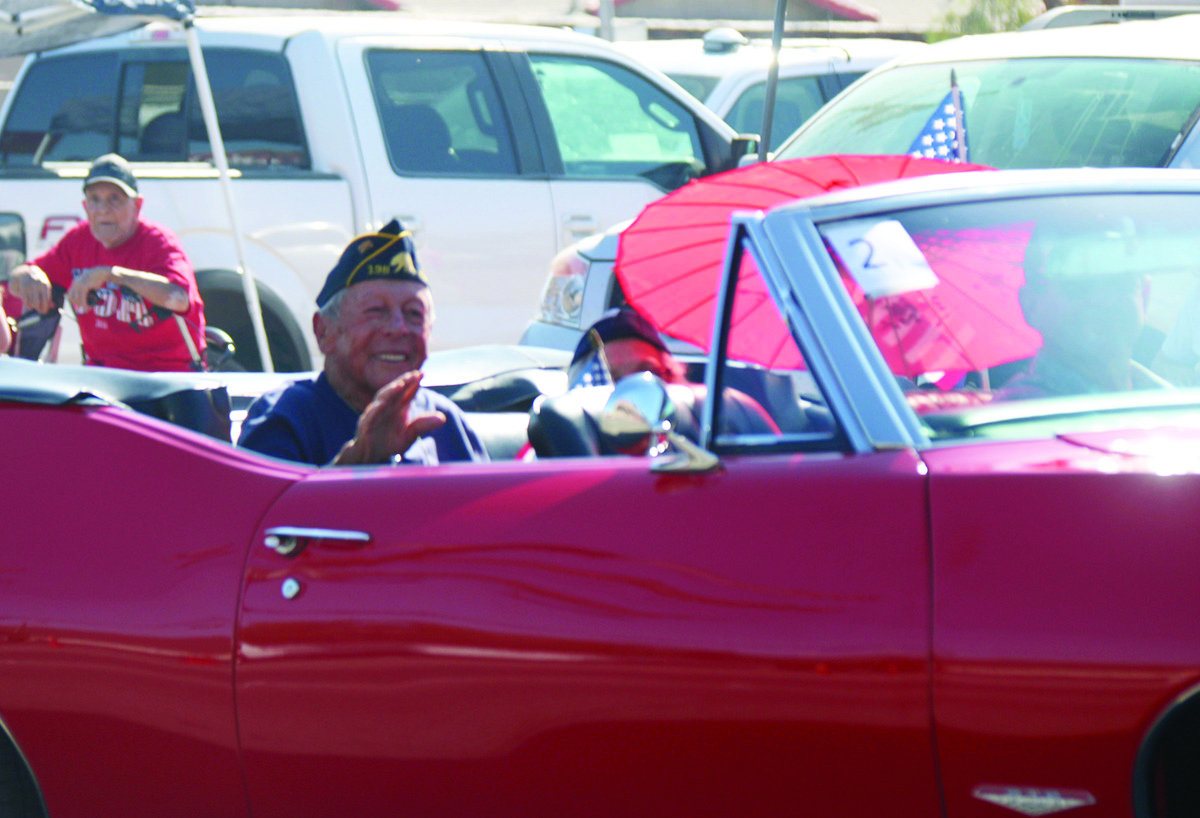 Holtville’s sixth annual Veterans Day Parade was a solemn as well as joyous occasion commemorating the veterans and active-duty service personnel who give the utmost to serve the U.S. with distinction.

It was held downtown on the morning of Nov. 11, the day the nation remembers all who served in the U.S. military, as opposed to Memorial Day that honors those killed in service of their country.

Leading off the parade was the Naval Air Facility El Centro color guard followed by the grand marshals, Oscar and Elvia Moreno, who waved to crowds from a fire-engine-red GTO convertible. Oscar is 96 and served during World War II at a base in Palm Springs, despite having vision problems.

“This is a day I will always remember,” said Oscar. “I was surprised they selected me but I told them, wherever I go, Elvia goes too. Veterans Day reminds me of all my friends who are not here, but I never forget them.”

Waiting in line behind a convoy of classic vehicles in an open car was Miguel Perez, master at arms for the U.S. Navy Military Police, affiliated with San Clemente Island. Perez is an Imperial Valley native.

“It’s truly an honor to be here today … it’s a calling,” he said. “I thank everybody for their support.”

With a front row view at Fifth Street and Holt Avenue, Holtville residents Joan Jencks and Jane Strahm staked out a top spot to view the festivities.

“My husband was in the Navy and served in the Korean War,” said Jenks. “He was a chief petty officer in charge of the engine room on a tanker. We both come to all the parades and we’re here today to honor my husband.”

Pedro Salgado, waiting for the parade kick off, had three older brothers in the military. One, a Vietnam veteran, passed away a from cancer caused by agent orange a few years ago.

“Out here (Holtville) the parade has turned out pretty good,” said Salgado. “I had aunts and uncles serve in the military, everybody in the Valley has. We’d like to see more at the parade. But a lot of them are out at the cemetery to visit their family but some will catch the tail end of this.”

Delia and her husband, Rafael Juarez, come to every parade but were there this year to support grandson Jonathan Juarez Salas who was marching and playing bass drum. Also there for his child was Jaime Garcia and wife Laura.

“We’re here to see Sophia play clarinet in the McCabe School band,” Garcia said. “We’ve been to the Carrot Festival but this is our first (Veterans) parade.”

Jazmin Camacho was also at her first Veterans Day parade.

“It was amazing, with all the different floats, the way they’re organized,” she said. “I loved it. We’re here to see my son Arenato (Luque). He marched as part of the Finley School ASES (after school education and safety).”

Cameron Luchner arrived from Imperial. He works as an engineer at Centinela Prison and thought the parade was inspirational.

“Seeing all the men and women who fought for their country and knowing how patriotic they are was wonderful,” he said.

Returning from the grand reviewing stand with family was Kevin Villagomez, an eighth-grade student who plays alto saxophone for the Holtville Middle School marching band.

“This was my third time in the parade and I thought we sounded great,” said Kevin. “I think it’s good to appreciate the guys we lost (in wars) today.”

Prior to the parade, the American Legion Auxiliary Unit 138 served a full breakfast to veterans. Arthur Juarez Cornejo is a Vietnam veteran who served in Pleiku in 1969-70.

“I appreciate being able to honor the people who served before us,” he said. “Today we’re going to the Evergreen Cemetery to honor our own dead. Then we’ll go to the ceremony at Bucklin Park (El Centro).”

Raymond Hernandez, wearing a T-shirt saying, “Army Strong,” is a veteran from 1969 who was stationed in Baltimore and then at Fort Hood in Killeen, Tex.

“The vets put their life on the line for freedom,” he said. “And some of us today remember the family we lost. I lost a nephew in Iraq.”

Many of the visitors remained at Holt Park after the parade to browse through the vendor stalls and listen to the blues rock of the band Misery Whistle. Relaxing in a camp chair was World War II veteran Jesus Sandoval, who is 96. He was a member of the military police, stationed in Okinawa in 1944-45. His granddaughter, Ana Ramirez, explained the family is very proud of him.

“I had to be here today. My husband, Manuel, served in Iraq four years,” she said. “We do a family reunion every year and Jesus always explains what he did in Okinawa.”

Celinda, Rosa Maria and Ana Sandoval, Jesus’ children, were also at the park.

“The parade was wonderful. I enjoyed it,” said Celinda. “My father, he remembers everything. He loves to dance and can sing in Japanese.”

Karen Gibbs, Auxiliary Unit 138 president, noted the parade was important to show the veterans they have the community’s support.           “We were so glad to get our float at the last minute,” she said. “Thanks to C.J. Johnston, our driver, and his father, Mark, for loaning us his trailer and putting our banners together.”

Next
Holtville to Face Off Against Mission Bay in CIF Play