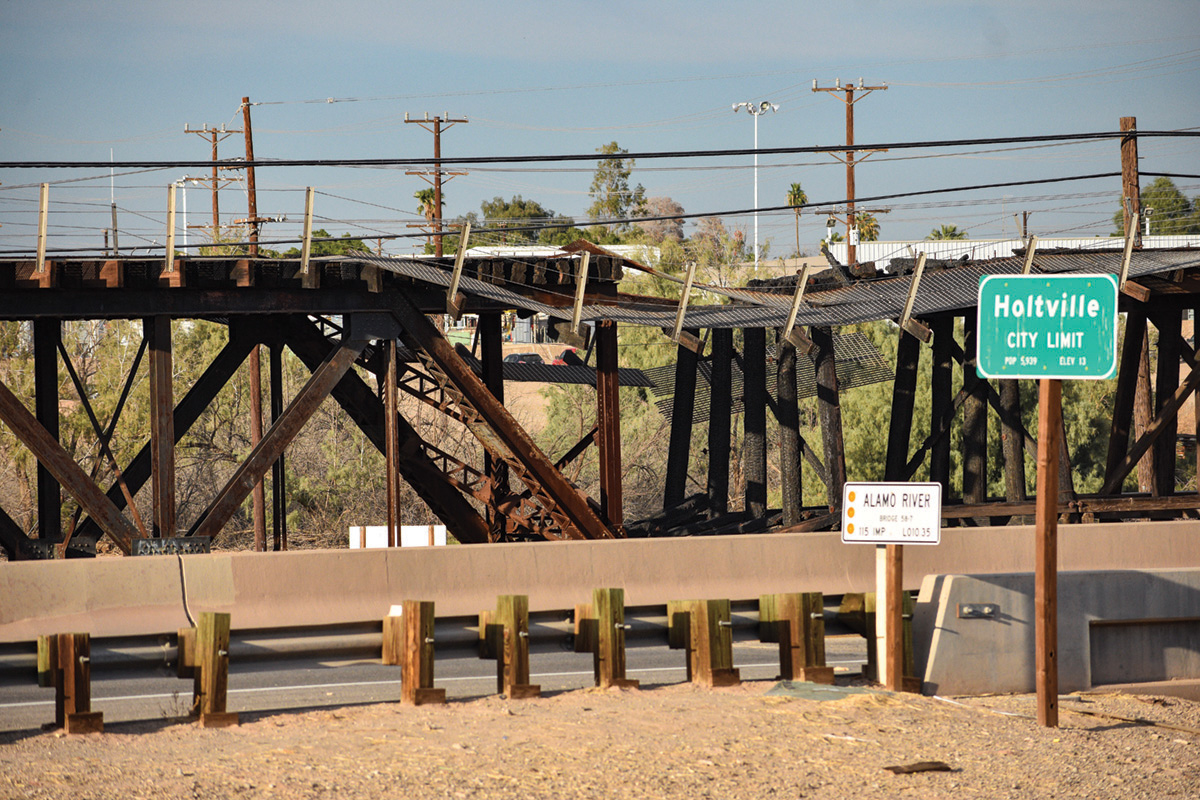 Long a local landmark and informal greeter for Holtville, the former railroad trestle over the Alamo River was damaged in a fire more than 10 years ago. The city hopes to get more funding to restore it as part of a walking trail. | Corissa Ibarra photo
Home
Featured Stories
In Featured StoriesLocal News

Built around 1910 near the end of the Holton Interurban Railway connecting El Centro to Holtville, the 270-foot Alamo River trestle has long been the signal  travelers are about to take the sweeping curve of Highway 115 into this tucked-away community.

The trestle looks worse for wear these days, heavily blackened with large timbers left charred from an accidental fire that spread along the river bottom more than a decade ago.

With the former rail line sold off in pieces by its owner, Holtville City Manager Nick Wells said the city bought the trestle in 2007 or 2008, shortly before the fire. Officials would like to see the bridge repaired and incorporated into the Pete Mellinger Alamo River Trail. It runs beneath the trestle and connects to Palm Avenue on one side and Earl Walker County Park on the other.

There is no urgency for repairs other than it being one of many city council priorities. The city holds about $730,000 in settlement money it intends to use for  the project, Wells said during a Nov. 14 interview.

That settlement money was paid to the city by a nearby packing shed owner where some welding sparked the fire that damaged the trestle.  Wells said the city sued for damages.

Holtville Fire Chief Alex Silva remembers the fire well. About to enter his 11th year as chief, Silva has been a firefighter in Holtville for 28 years. The fire ignited the brush of the river bottom and started heading west, Silva said, before a sudden change in wind direction took the blaze southeast right into the path of the trestle.

Silva said that in the 1940s, railroad companies used to cover exposed wooden beams in creosote, a brown or black oily and highly-flammable substance, to prevent dry rot. Silva said when the fire hit the creosote-covered timbers of the trestle, “It took off.

“That was one of my first fires as fire chief,” Silva said during a Nov. 15 interview. “I used to walk that trestle bridge as a kid. It just broke my heart when it went up.”

Wells said the city hopes the trestle is something that will attract those out for a walk.

“We’re trying to get it repaired to be more presentable, more visibly appealing, to make it nice, but it’s got that big burn scar,” Wells said. “But it also needs a use.”

Wells said repairing the bridge comes with a cost, yet he implied the city is never going to get any additional money for the work unless the repairs lead to another use for the trestle. Fixing the bridge alone has come with estimates of up to $2 million.

The city manager said the first estimate came in 2009 or 2010 and the engineering firm mistakenly assumed it would be work to get a train running across the trestle again, so that estimate was for $2 million. In 2014, a second estimate involved repairing the fire damage only, and did not include operational tracks; that was the $1 million projection.

By somehow incorporating the Alamo River trestle, also known as the Holton Interurban Railway bridge, into the design of a pedestrian walking path or feature, the hopes are it will open the trestle to grant funding. Wells said one plan would be to see the Mellinger Alamo River Trail fork off and cross the trestle and create a path to the side of 115/Evan Hewes Highway.

The short-term idea is to fix the trestle and make it walkable, Wells said. A long-term goal would be to have a side road from the trestle/bridge lead all the way to the Barbara Worth Country Club so those in golf carts could take them safely into Holtville.

Highway 115 Closed in Holtville on Friday and Monday

While creating such a lengthy trail is a “long-term vision,” Wells said, “We would first need the conveyance across the Alamo River.”

Finding a grant and leveraging it to make the bridge/trestle walkable — the secondary function — would hopefully get the city where it wants to be in fixing the fire-damaged focal point, Wells said.

He added that if the city does end up finding a grant, the fire settlement money could be used as matching funds or contribute to the work in some way. Alone, it will not be enough to do much of anything.

“I sure hope it happens,” Wells said. “The council has talked about it, but we knew it was not feasible to fix it (with just $730,000). It has to have a beneficial use … so we could seek that gap funding.”

Next
Detest the Pest: County Antes Up to Help Ag Battle Insects, Weeds