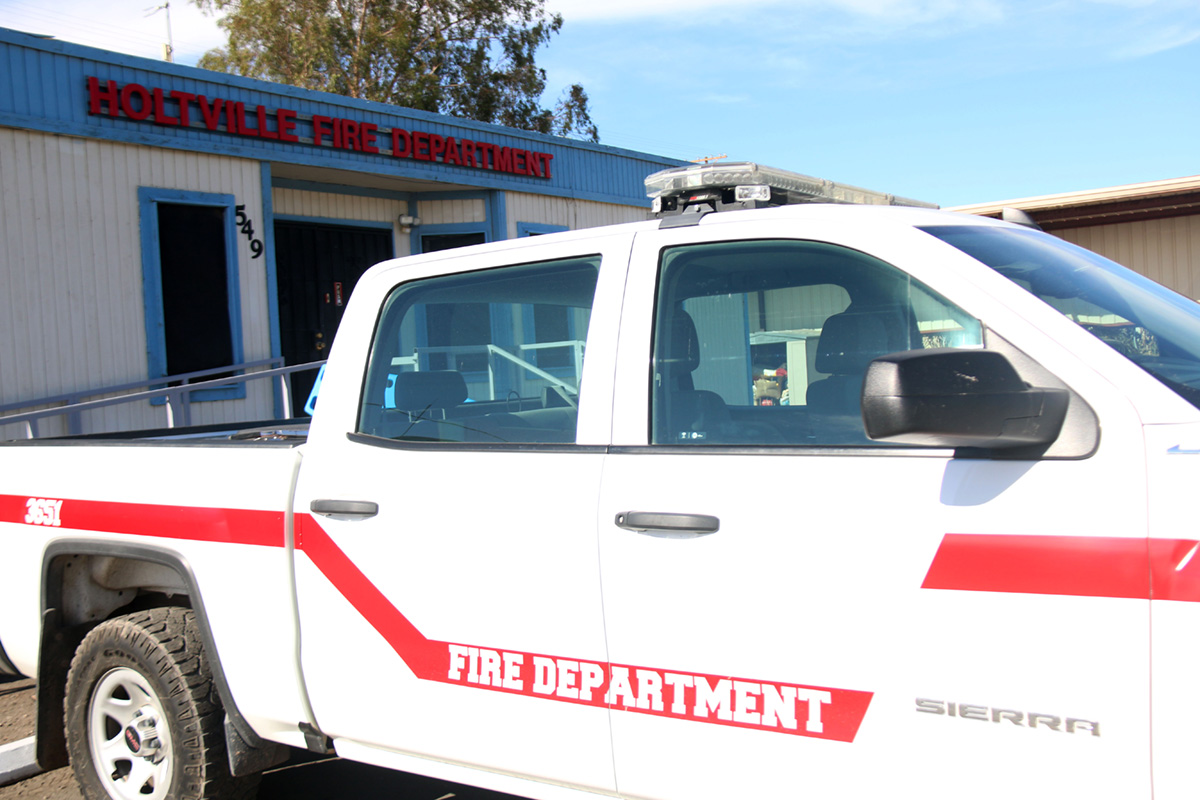 Holtville Fire Could Use New Building, Cops Not So Much

HOLTVILLE — The proposed public-safety building that would house both the fire and police departments in Holtville has been on the drawing board for nearly two decades and delayed by a variety of factors, including lack of funds.

The idea for the facility was pushed by then-council member Coleen Ludwig in the wake of the 9/11 attacks in 2001, explained Fire Chief Alex Silva.

“It’s definitely needed,” said Silva. “It’ll improve response, training and allow our guys to get the rest they need (with expanded sleeping quarters).”

Back in 2007 when Holtville issued bonds to cover design expenses, the cost of the building was approximately $3.5 million. But the project was put on hold before publishing requests for proposals in order to implement more environmentally friendly features such as solar panels and greener building materials.

“It would allow us to have an emergency operations center where we can host training for other fire and police departments, as well as do Red Cross shelter training,” said Silva. “We also do CERT (community emergency response team) training. These are volunteers who help us out with a disaster.”

Former Holtville resident Milton Meeks donated 1.71 acres just north of Holt Park for the building. At the beginning of this year, a Community Development Block Grant fell through when the council was informed only $3 million was available and the city had to have a plan to make up the difference for the total cost.

Because a lot of time elapsed since the last construction estimate, the city based a new estimate on a similar facility just completed in Winterhaven. When officials multiplied the square footage required for Holtville’s building it escalated to a $9 million cost, “a bare-bones estimate,” said City Manager Nick Wells.

The new building would be designed to house all fire department vehicles. This includes three type 1 trucks that have a minimum of 1000 gallons per minute of water transfer; one brush truck, used for wildland or urban structural fires; a rescue vehicle to dispatch emergency medical technicians; a command vehicle, which is a SUV so the chief can run the incident remotely; and a truck to transport two sets of portable lights.

Silva explained the department currently has four firefighters and two American Medical Response ambulance personnel housed at the station in cramped quarters. The sooner a new facility is built, the better, he explained, but the department will make do with present quarters.

However, the Federal Emergency Management Agency offers a grant each year, which does lead to a bit of hope for funding.

“We’ve applied every year since 2001 but the further we get from 9/11 the more difficult it is to get the grant. But we’ll keep trying,” said Silva.

Holtville even reached out to the office of Assembly Member Eduardo Garcia (D-Coachella) for funding. The legislator’s office recommended four possibilities: U.S. Department of Justice, California Commission on Peace Officer Training, U.S. Department of Transportation and the Department of Homeland Security.

Despite having limited facilities, the fire department is capable of handling any emergency, Silva assured. Even if the department had a new building today, it would still put out a call for mutual aid from surrounding fire departments if the magnitude of a fire warranted it.

“A new building will not eliminate the need for that,” said Silva. “Similar to El Centro with three fire stations, they still call for mutual aid. A new building would provide more training (space) but it has nothing to do with the gravity of the disaster itself.”

Holtville law enforcement for the prior 10 years has been under the oversight of the Imperial County Sheriff’s Office. Currently the chief of police duties are fulfilled by Sgt. Roy Patterson. He explained ICSO is in Holtville at behest of the contract between the city and the county.

“We’re obviously fine here (in the current building),” he said. “I believe we provide adequate service and get along well with the fire department and city council.”

Regarding the urgency to complete a new facility, Patterson noted he is not privileged to know what the city’s budget constraints are and setting a timeline for a new building is a decision for the city council. As of now, the law enforcement contingent is staffed with one sergeant, two senior deputies and three deputies.

Patterson said he has not reviewed with any city staff plans for a possible new facility. In fact, he first learned of the new facility when Wells broached the subject at a council meeting at the beginning of the year when the CDBG grant was mentioned.

“It’s not a salient issue right now,” he said. “We have multiple projects we’d like to begin but lack resources.”