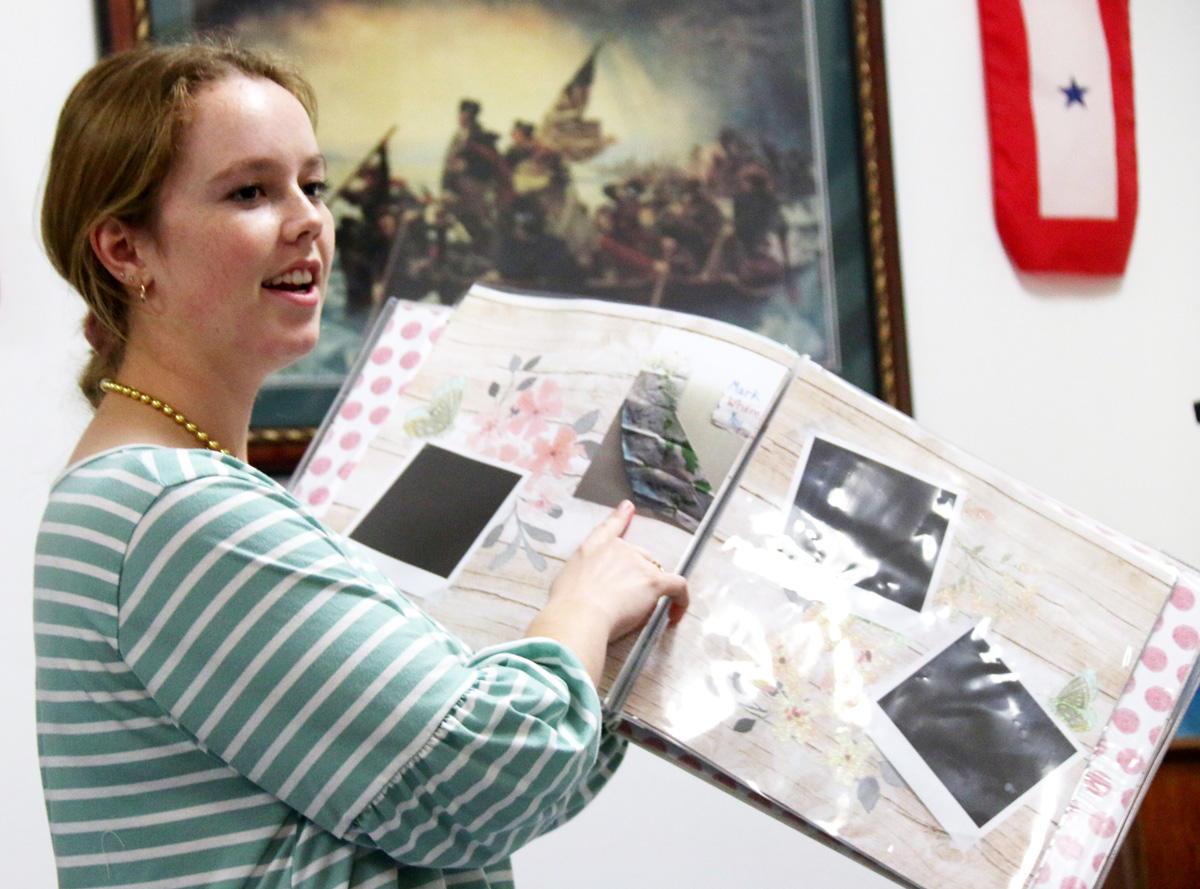 Boys and Girls State Alums Share Their Experiences With Veterans

HOLTVILLE — Ambitious Holtville High School seniors Ella Hoyt and Emil Schaffner took time out from busy schedules to inform the community about their experience this year with California Girls and Boys State.

They are a leadership program of the American Legion founded in 1935 to increase awareness of governmental processes while teaching students about the rights and responsibilities of citizenship.

The students addressed an audience of veterans, families and supporters at Legion Post 138 in Holtville on Dec. 2.

In the annual event, students spend a week participating as part of running mock local, county and state governments. Girls State convened at Claremont McKenna College, in Claremont, from June 24-29 and the boys met at California State University, Sacramento, June 20-27.

Diving in the Political Stream

Students often engage in electioneering upon their arrival and Ella said she  knew she wanted to go for something big.

“I was head of the Health and Human Services Department as an assembly member of the state legislature,” she recalled. “I had to speak on behalf of my legislative bill before it goes before the floor of the assembly. It was very fast paced, but one bill we passed was to sustain aid to veterans.”

Ella explained debating was honestly fun and she thought it was cool to debate in a government setting and follow the rules.

“I liked listening to the other girls and by listening you picked up pointers on writing a speech–what to do and what not to do,” she said.

Toward the end of the week the students presented a civic expo.

“We set up a tent and had a lot of greenery,” Ella remembered. “Our town was called Summerville. And we produced a newspaper and explained how our city functioned.”

Emil recalled he followed a different path, avoiding elected office, he still engaged in the political process by “passing the bar exam” and becoming a lawyer.

“Our lead counselor, Dale Major, was a lawyer in real life,” said Emil. “He  said we’d need a lot of money to fund our legislative programs. But my friend, Oscar, said a lot of students would wind up arrested. So, we set up a bail bonds business.”

Many students were arrested once their government began changing the colors of the stop signs, he explained.

“I got a lot of people out of paying traffic tickets,” Emil said. “On ‘Capital Day’ we helped get a bill passed to let high school students start school at 10 a.m. (as per recommendation of the Centers for Disease Control).”

“Boys and Girls State provides opportunity for our high school juniors to learn the pros and cons of crafting government legislation,” he said in an interview. “It will prepare them for their future. There’s the Eagle Scouts and then there’s the Boys and Girls State. Those who manage well here will go on to succeed in the outside world.”

Highway 115 Closed in Holtville on Friday and Monday

Helina and Shannon Hoyt, attended in support of their daughter Ella. Helina explained Girls State is a great opportunity to spend time with like-minded peers who are proactive in their communities.

“Even though their opinions are different, they learned they had to cooperate to achieve a common goal,” said Helina. “Now, with every college application we receive they want to know what leadership, community engagement and volunteer experience you’ve had.”

Insider Advice From a Vet

Carlos Zaragoza, the brother of Sgt. Victor Zaragoza who is honored on Holt Park’s memorial wall, is a veteran, Post 138 member, and advocate of Boys and Girls State. He chatted with Ella and Emil after their presentations.

“Kids are one of the main reasons to participate (in Boys and Girls State),” he stressed. “American Legion is all about patriotism … and integrating our presence in the community.”

Inconspicuously overseeing the evening’s pot luck dinner and speakers John Jordan, commander of Post 138, has devoted 34 years to the American Legion Post. He explained Boys and Girls State is an opportunity to learn what is outside Holtville.

“It’s a chance to interact with kids their own age group,” he said. “They learn about other parts of California. We’re known in Imperial Valley for farming. But they farm in the Central Valley, as well as up north, Lassen County. These kids (Ella and Emil) they met had no idea where Holtville was. But they do now.”