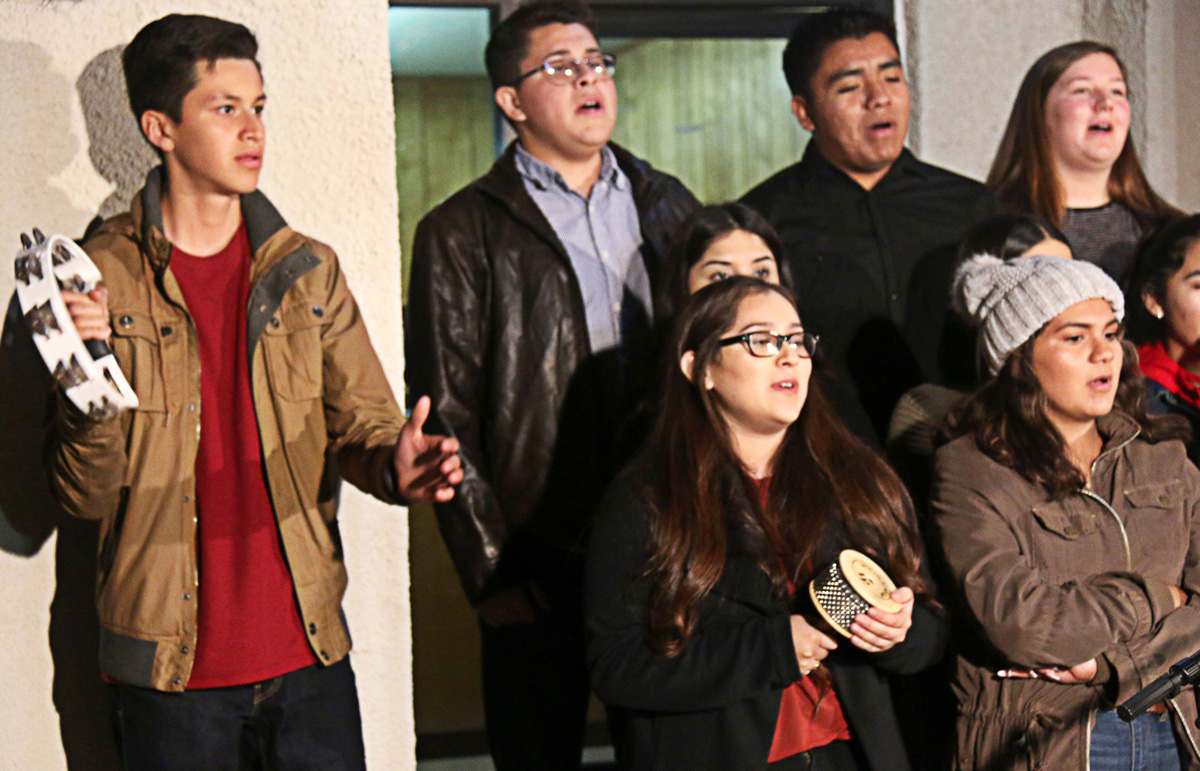 Choirs Get Holtville Residents in Holiday Spirit at Tree Lighting

HOLTVILLE — Cool temperatures and a steady breeze were a sure sign of winter and, despite the whirlwind of holiday preparations, Holtville residents jammed Holt Park’s gazebo area on the evening of Dec. 5 for the traditional lighting of the town Christmas tree.

A city sponsored event, Fire Chief Alex Silva welcomed the throng and despite threatening skies noted they hoped it would not rain “and so far so good.”

“We appreciate having the city participate in the tree lighting,” she said. “What I really enjoy is seeing the community come together and all the various individuals come out to join the celebration.”

Ellen Underwood directed the TK Choir that performed a spirited medley of “Wish You a Merry Christmas/Good Tidings to You” and “Rudolph the Red-Nosed Reindeer.”

“It was cute,” said Underwood after she finished conducting the children. “However, they are only half of our choir. This is their first time singing (publicly). But it’s good practice for our program on Dec. 17 at the Finley Auditorium.”

The Finley GATE (gifted and talented education) Choir followed next with a selection of some favorite pop Christmas tunes. The older elementary students especially put gusto into classics such as “Rocking Around the Christmas Tree” and “Jingle Bell Rock.” This ensemble was under the direction of Lovette Stiff.

Yvonne Moreno, of the Viking Band Of Pride, explained prior to her Advanced Choir performing they had six selections ready but admitted it was hard to single out a stalwart number.

“I always loved “Feliz Navidad” because everyone sings along,” she said. “It’s nice to have people sing in Spanish. And I love watching the little ones sing and dance. It’s exciting to see them get excited about music. They’re the future and we (teachers) know we’ll inherit them eventually.”

At the opening number, “Last Christmas,” soloist Victor Valencia was showered with calls of encouragement from classmates in the audience.

That was followed by a chilling rendition of Leonard Cohen’s “Hallelujah” by the sopranos and tenors section of the Advanced Choir and that segued into a soulful “Let it Snow.”  The soloist, Nicholas Singh, had a good vocal range that helped propel the melody along.

“I like singing it and I like the Christmas season,” he said. “It’s an opportunity to hang out with family. We’ll be visiting my grandparents in Los Angeles. I last visited there a year ago and it’s a fun place to be.”

Raphael Espinosa, baritone and tambourine accompanist of the Advanced Choir, explained the tree lighting was a good opportunity to let residents know what the choir is about.

“We always give the audience the best we have,” he said. “All the choral pieces we perform have something special.”

Annel Alvarado, a senior, sang “O Holy Night” as a soloist with a lilting charm in her voice.

“I really enjoyed it, especially since this is my last year in choir,” she said.

Debbie Fjeldsted, the grandmother to Sophia Lyerly, a junior who sang in the sopranos and tenors section of the Advanced Choir, said, “I’m really proud of this choir.”

Next
Boys and Girls State Alums Share Their Experiences With Veterans