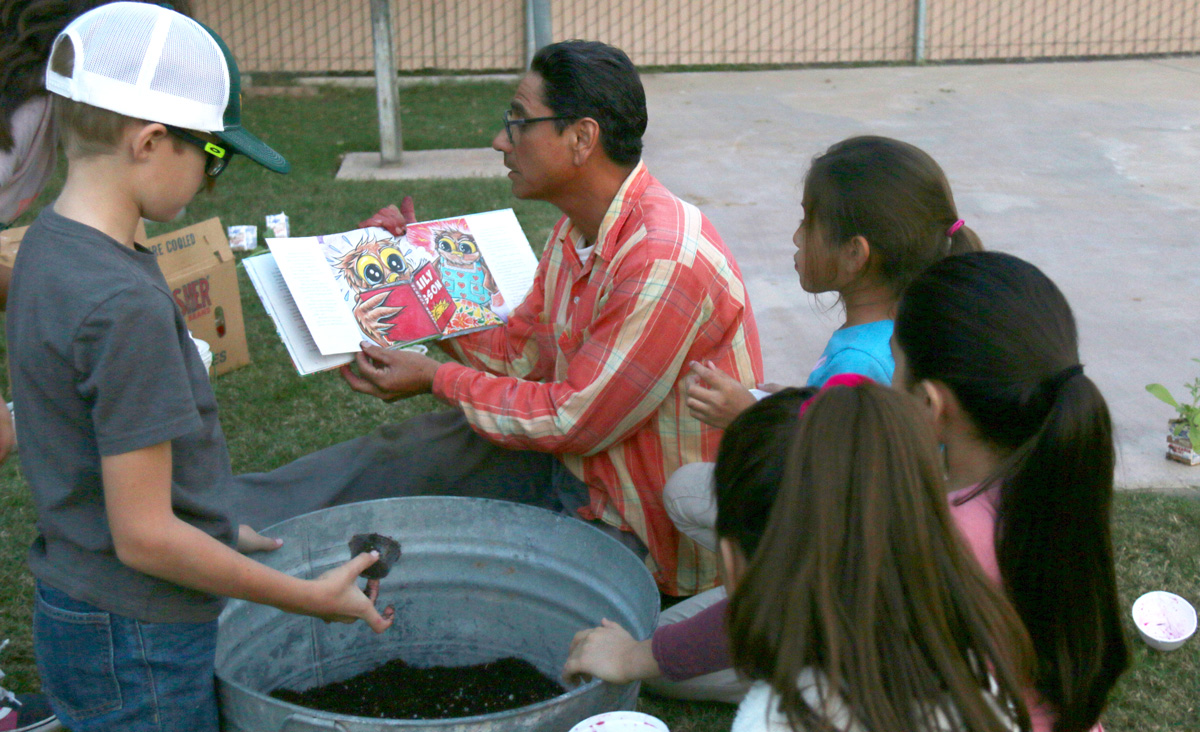 HOLTVILLE — It all started with a seed of an idea at the Boys & Girls Club of Imperial Valley — first in Brawley, then spreading to Holtville — to cultivate an appreciation of plant life in young people by acquainting them with the natural world surrounding them.

Gaby Casas, Boys & Girls Club unit manager in Brawley, four years ago helped launch a club garden when the organization got a grant from the California Wellness Foundation based in Los Angeles.

“We wanted to promote healthy lifestyles,” said Casas, who transferred to the Holtville Boys & Girls Club three years ago. “We started growing carrots, broccoli and cauliflower, then theme gardens like the salsa garden, with tomatoes, onions and cilantro. Then we got Vince Zazueta (manager of the Harding Elementary School garden in El Centro and a private growing consultant) to teach the children how to grow their own fruits and vegetables. I split them into two groups: kindergarten through second grade and third grade through the sixth.”

Zazueta, a master gardener and University of California, Davis, agriculture graduate, arrived about 3:30 p.m. Dec. 10 at the club site at the St. Paul’s Lutheran Church campus in Holtville. He began a session by reading from the classic children’s book, “Owl in a Straw Hat” by Rudolfo Anaya, known as one of the founders of contemporary Chicano literature.

“I want the kids to learn about the natural world,” Zazueta said. “I hope that when they become more aware of the environment, they acquire an appreciation of science.”

Rhodey Boston, a third-grade student at the Pine School, explained he recently helped plant broccoli at the garden and brought some home.

“I don’t really like broccoli, but I did like playing with the worms (in the compost),” he admitted. “But I like cucumbers, especially in a salad.”

Rhodey’s mother added when she arrived to pick him up, “As long as it has ranch dressing over it. I discovered that a long time ago.”

“I don’t garden at home,” Rhodey confided. “But I like watermelon and blueberries. And I liked the pomegranates we ate today.”

Zazueta broke open a pomegranate and dished out the sweet innards of the fruit. Zazueta cautioned the children to be careful not to spill the pomegranate seeds from the Styrofoam cups because they can cause a permanent stain on their clothes.

All the children of the garden club were delighted with their pomegranate treats, most of whom asked for second and third helpings.

Maddy K., a Finley school fifth-grade student, has been attending a previous garden club session and noted she hopes she returns more often.

“I help my neighbor, Michelle, plant fruits and veggies,” Maddy said, who Casas asked her last name not to be used, like the rest of the children interviewed.

“I helped plant pumpkin seeds. And then in the fall we had a pumpkin pie. And we also mad giant fruit salads with apples, watermelon and cucumbers,” Maddy added.

“But we planted cucumbers and spinach and those were pretty good,” he said. “I also did a shishito (an east Asian pepper) today. It was the first time I heard of it. I like the garden club a lot. And I may try it at home, I live just across the street.”

Carmela V., a third-grade student at Finley School, has been in the garden club for three years.

“I like that we can plant the vegetables and I get to play with the worms in the pile of dirt and newspapers (compost),” she said. “My favorite are carrots, but I also like black olives, celery and cucumber. My mom asks me to help plant her cactus. And I help my neighbor plant sunflowers.”

Education at the root

Zazueta sees the garden as a perfect teaching moment.

“I want the kids to become good stewards for the environment,” he said. “Research shows that kids who work on school gardens grow into adults who are environmentally concerned. And as adults they are better informed. Even the top of the news stories are talking about climate change, and how it’s affecting the wildfires and floods. It’s the next generation that must solve these challenges.”

“Vince teaches the children about the plant cycle, from seed to flower to fruit,” she said. “Then it dies, and we collect the seeds and start the cycle over again. Now the Holtville garden is expanding. The kids really love it and it helps with their education.”