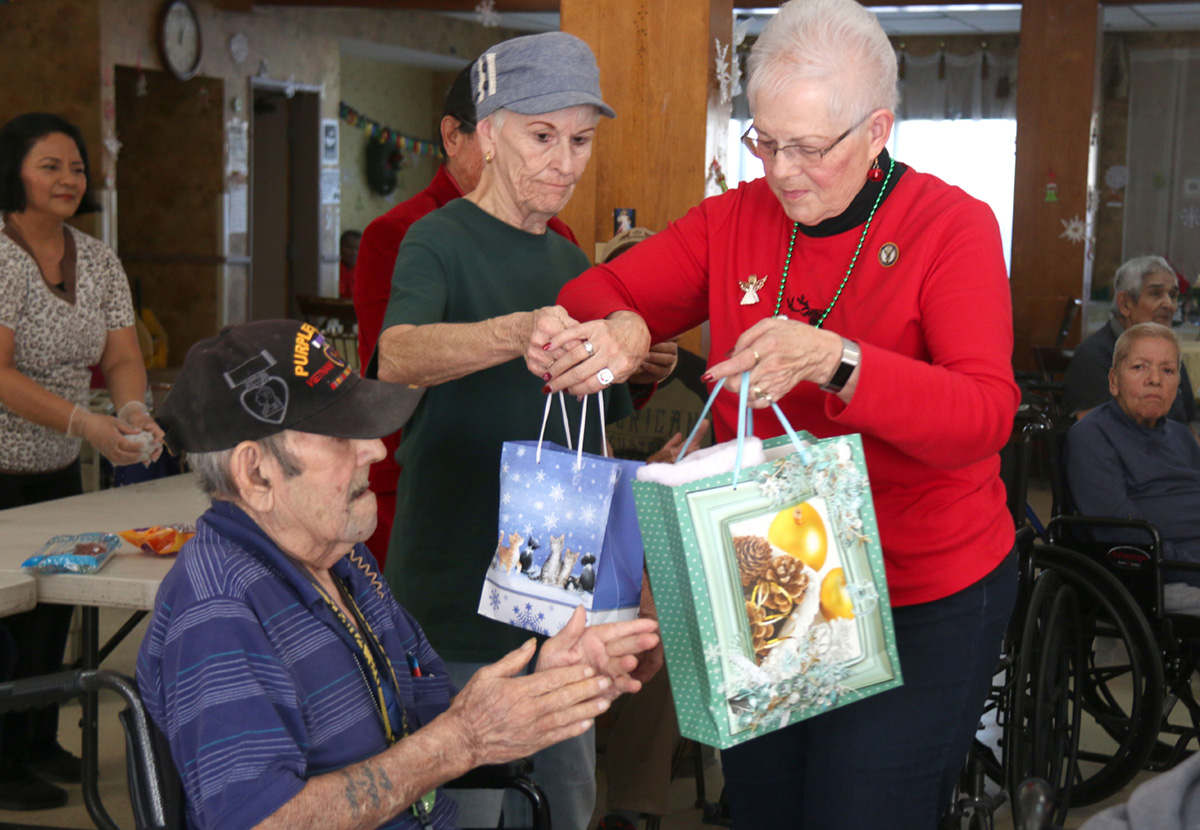 HOLTVILLE — Their memories might be faded now long after challenges in the armed services, but the elderly veterans at Blossom Valley Inn in Holtville brighten up with recognition when visited by the American Legion Auxiliary Unit 138.

Christmas arrived early on Dec. 13 for the handful of Korean- and Vietnam-era veterans remaining at the Blossom Inn as the Auxiliary treated them to a pizza lunch and donated baskets brimming with holiday treats.

After several slices of pepperoni pie and a pop Granillo had the contented look of Lewis Carroll’s Cheshire Cat but admitted he liked the caramel sauce ice cream the best.

“I’m really full now,” said Granillo as he rolled his wheel chair out to Blossom Inn’s outdoor quad. “I like to smoke outside. I have little tolerance for crowded rooms with lots of people. But my roommate shares his downloads of classic TV programs and we like to watch Bonanza (a 1960s Western).”

Gibbs said she thinks the now annual Christmas and Easter holiday lunch visits to Blossom Valley are a wonderful ritual.

“We can show love and support and how much we care for the veterans,” she said. “We lost a few from our first visit and some may not be around in years to come. But they really enjoyed the pizza and other treats and it was fun to see the smiles on their faces.”

Joan Carey, another Auxiliary member, explained it was an honor to serve the vets.

“It was so refreshing to hear their stories because they have so many to tell,” she said. “They obviously enjoy our visit and you can tell it’s up-lifting for them.”

Added Helen Wilson, another Auxiliary member, “Once we got all the vets downstairs to the table it went smoothly. They’re such sweethearts and very appreciative of anything you give them and that makes us feel good.”

Javier Pasillas, 60, who wears his age extremely well, was an Air Force aircraft maintenance veteran who served in the mid-1970s. He is disabled due to hand problems. His family sends him boxes of food and clothes from time to time but he could still use some shampoo, bar soap and would like some candy if possible.

“I enjoyed the pizza but the soda (lemon lime) was best,” he said. “I really like to stay outside and have a smoke.”

Not having to go far away to do his service, Gary Searl was in the Army stationed near San Diego in the 1970s. He also played in the offensive backfield of the Holtville High School Vikings football team. When he is not playing dominoes at Blossom Valley he enjoys watching baseball, basketball and sometimes hockey on television.

“They treat me well here,” he said. “The lunch was marvelous. I loved the strawberry ice cream.”

Although he enjoyed the pizza, Alejandro Cota, an Army staff sergeant special forces veteran, said he really preferred the refried beans and the ice cream. He has been at Blossom Valley five years and especially likes his private room.

Carlos Zaragoza, an American Legion Post 138 member and visitor to the vets at Blossom Valley, explained the lunches are as rewarding an experience to visitors as they are for the residents. He noted a couple of veterans were emotionally moved when he thanked them for their service.

“We have to let the entire community know about the veterans at Blossom Valley Inn,” he said. “They have stories to tell–they’re not just sitting in a corner. They’re kind of quiet at first, but once I introduced myself, they begin to open up. It’s always interesting to hear their tales.”