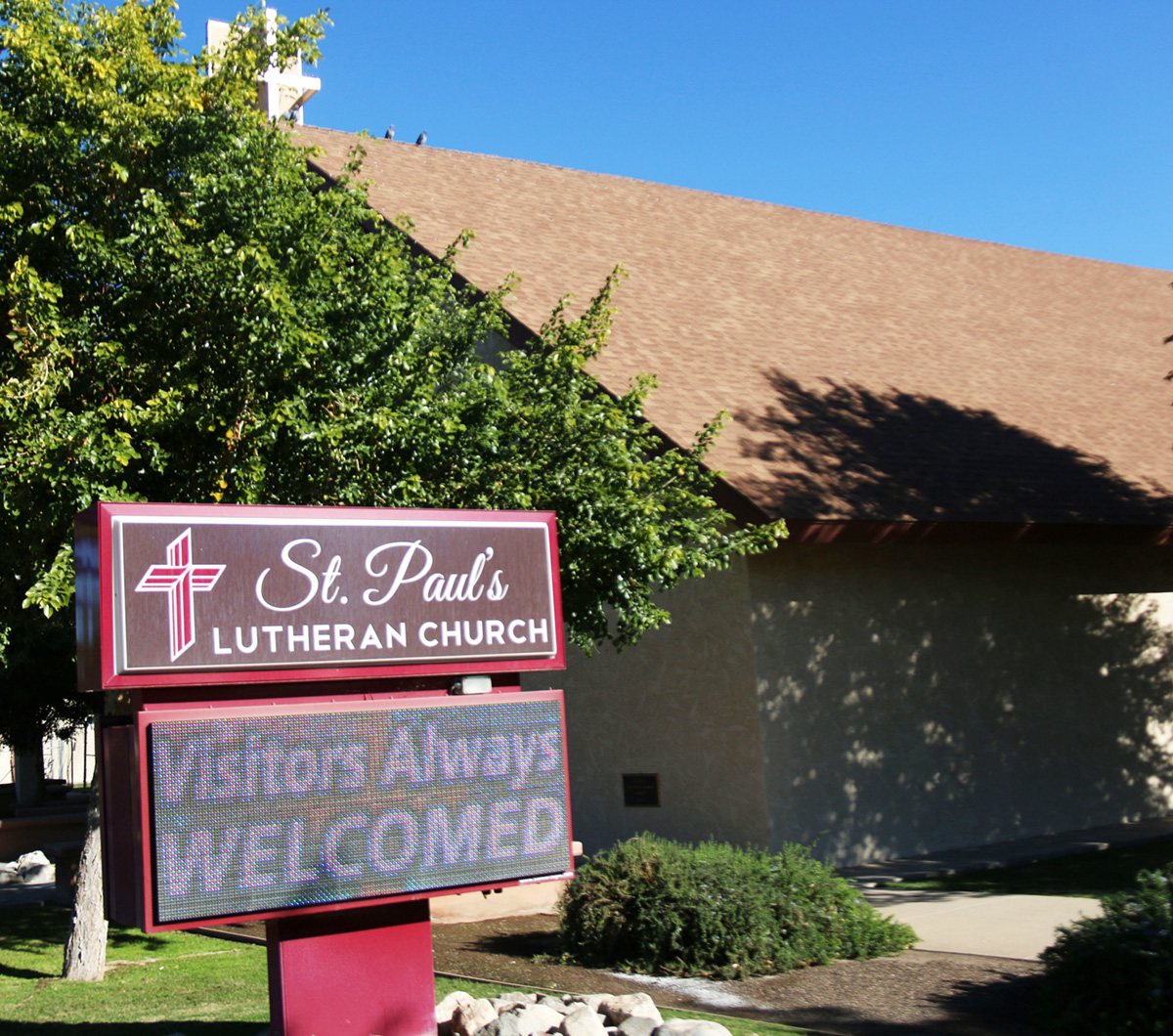 St. Paul's Lutheran Church on the eve of the Celebration of Life for the late Jane Strahm in Holtville, Dec. 13. | WILLIAM ROLLER PHOTO
Home
Featured Stories
In Featured StoriesLocal NewsObituaries

HOLTVILLE — In Holtville, which is small enough where many are acquainted, residents are still coping with the loss of Jane Strahm, who was tragically killed in a Dec. 5 traffic collision near El Centro.

Strahm, 82, was driving north in the southbound lanes of Highway 111 near Evan Hewes Highway when she collided head-on with a pickup driven by a Brawley man, the California Highway Patrol reported. Both were taken to El Centro Regional Medical Center where Strahm died a short time later. The other driver suffered a broken leg.

News of Strahm’s passing caught many unaware and they struggled to express their feelings of losing a fond friend.

“We were all shocked to hear of the accident,” said Wanda Layton, who noted she had known Strahm since their school days in Holtville. “You just don’t expect something like that. Of course, no one knows how it happened. And coming near Christmas time it is all the more sad.”

Strahm was born Rhoda Jean Neidiffer and married the late Walter Strahm in 1955, according to obituary information provided to this newspaper.

She was remembered as a woman who was active in her parish, St. Paul’s Lutheran Church, and dedicated to her family.

Jeannette Monroy said she was better acquainted with, Strahm’s sister, Edith Neidiffer, yet was casual friends with Strahm.

“Jane just decided to join the Woman’s Club and paid her dues Wednesday (Dec. 4),” Monroy recollected. “She was a lovely person, obviously well-liked … Everybody loved her.”

Jim Roberts, director of education at St. Paul’s, said he had known Strahm  since he arrived at the church six years ago. He recalled she helped with the Lutheran Women’s Mission League and with cooking and baking at church dinners.

“Jane did crochet and needlepoint and would donate her pieces to our craft sales that supported church fundraisers,” recalled Roberts.

Strahm also provided moral support for her great-grandchildren, who enrolled at the parish’s Vacation Bible School, Roberts added, for instance attending the June performance of the missionary journey around the Mediterranean in which the children participated.

Strahm had a strong relationship with her husband, he recalled.

“I used to visit her and Walter at their home,” remembered Roberts. “They’d share stories about the good old days and family ties.”

St. Paul’s Pastor Mike Beyer recalled Strahm as soft-spoken yet a person with a great memory and depth of knowledge about the community, specifically the church and Holtville history. He also noted her devoted church attendance, including mid-week services.

“She was ‘the’ one who could remember the way things used to be in Holtville, how residents were connected and whether they were related,” said Beyer. “People will remember most, Jane’s kindness and gentleness.”

Strahm and her husband were high school sweethearts and married not long after finishing school. She was baptized and confirmed at St. Paul’s just two weeks before she and Walter married, noted Beyer.

Jane and Walter were super close and did nearly everything together, Layton remembered. The two of them were mostly family oriented.

In recalling the day of the crash in which Strahm was killed, long-time friend Marion Stacey said, “I think I was the last one who had seen Jane.”

Active in the Woman’s Club of Holtville, Stacey said she persuaded Strahm to attend several meetings as a participant. It was on Dec. 4, the day before the crash, that Stacey sponsored Strahm’s membership.

Strahm handed off her camera to Carol Hann, another Woman’s Club member, who took a couple of photos of Strahm at the club. Then it was Strahm who offered to drive Stacey home.

But Stacey recalled she had left a package behind in Strahm’s car and Strahm drove to Stacey’s home late in the afternoon on Dec. 5 to return it. Stacey said she asked Strahm to mail a letter for her and she agreed.

“It’s terrible. I can’t believe this,” said Stacey. “I thought she was going to the Holtville Post Office when she then turned right, like to go to El Centro. This was really a shock. Oh, my gosh.”

The Highway Patrol reported officers responded to the Highway 111 and Evan Hewes area following “multiple 911 calls” about a wrong-way driver. Further information about the incident has not been released.

Previous
Despite Bumps, Holtville Chamber on Track with Carrot Festival