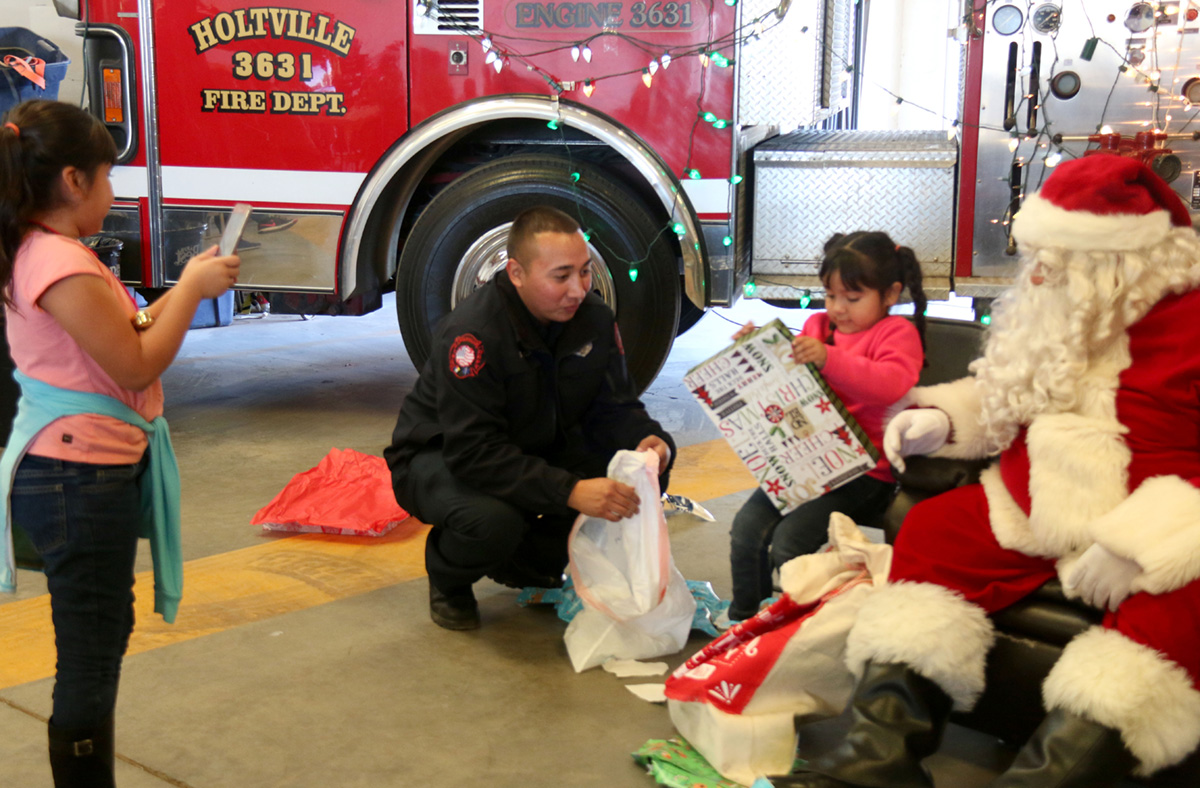 HOLTVILLE — The Holtville Fire Department delivered the gift of joy at a pre-holiday party for underserved children at the station house on the first day of school Christmas vacation.

There were 23 students from Finley Elementary School revived from the hazy shade of winter with games, snacks, pizza and a visit with Santa Claus, whose sack was bulging with cool clothes for even the fussiest student.

“It’s based on the original concept of shop with a cop, but we decided to double it so every kid gets $100 worth of clothes and a $100 gift card,” he said. “Our city loves our kids and we’ll make sure we’ll take care of them.”

City Manager Nick Wells stopped by with his grandson to decorate cookies and praised the department for its efforts.

“I grew up and went to school here and we’re proud to be from Holtville,” said Wells. “We give credit to Chief Silva and his crew because they made it happen.”

Silva explained the department spent four days in nonstop shopping to stock up on the store of treats with which to surprise the children.

“But ‘our’ guardian angel is Johnny Burnworth,” said Silva as he pointed to the inscription of the name of the former Holtville firefighter on one of the fire engines. “We lost him last year but Johnny is here with us in spirit. We want to thank the Burnworth family, who really stepped up to help us get this done.”

Johnny Burnworth was an Imperial Irrigation District diver who died in the  line of duty.

Rebecca Irene Smith, a first-grade student, was engrossed in custom decorating of a sugar cookie for the afternoon’s life of the party.

“I made this cookie just for Santa,” she exclaimed, proudly holding her creation garnished with a rainbow of sparkles.

Helping Rebecca direct the icing pouch was her grandmother, Peggy Irene. She noted the fire station party was a great idea for the families still struggling with finances.

“Becca still likes hanging out with her grandma,” said Irene. “We have a lot of fun. Sometimes we go to the dinosaur quarry in Utah. Becca loves it.”

Tiffany Terrill, a Finley School counselor, researched the families invited to participate and thought the fire-station party a wonderful idea.

“They’re so generous and it’s great the fire station staff makes the effort to spend time with the kids and gets to know them,” she said.

Before children could get absorbed in their snacks, Silva had them gather their chairs in a circle for a lucrative version of musical chairs. Three packages of tightly bundled cellophane treats (mostly candy but some with money) had to be liberated from their Gordian knot to keep the prize before the pop music sound bite faded from the sound system.

The Zavala sisters, Eva, Sophia and Araceli, worked as a team and their cooperation payed off as first Araceli and then Eva struck the jackpot by breaking through the onion skin layers of cellophane to rake in first a dollar bill and then a twenty.

Other children, Jonathan Hurtado and Natalie Garfio, seemed as pleased with their prizes of Reese’s peanut butter cups and Snickers bars. The competition appeared to delight the students as much as the sugar confections.

Nothing lit up the children’s faces with more fascination than the arrival of Santa. With a siren blazing and sunburst lights flashing, the jolly old man was chauffeured in a flashy pickup rather than the traditional sleigh.

Children were delighted to sit with him and were very appreciative of the gifts he bestowed. What better way to prepare for the spring term of school than a new wardrobe of clothes? The Zavala sisters had fun taking photos of each other opening the gifts they received.

Santa’s sack would have been quite spartan if not for the generosity of the Holtville residents and business who helped contribute to the bounty. Sponsors included Dan Daniels, CoopersWest Insurance, John and Ayron Moiola, Kevin Grizzle Farms, Verde 4H Farms, Burnworth Landscaping and the Holtville Fire Association.

At the eleventh hour Vessey & Company came through with a $500 donation the day before the party.

“So we’ll go out and get the shoes and give them to Finley who will distribute them to the children,” said Silva.

An Angel From on High

Reveling in the festivities were Patricia and Erick Burnworth, mother and brother of Johnny Burnworth. It was done in part for Johnny’s honor. “This event for the kids touched him so much he looked forward to it,” said Pat of Johnny. “For a couple of years at Christmas he adopted a family at Slab City and brought them Christmas gifts. I’m just so happy to have this little town. We’re small but mighty. Holtville’s always been awesome.”