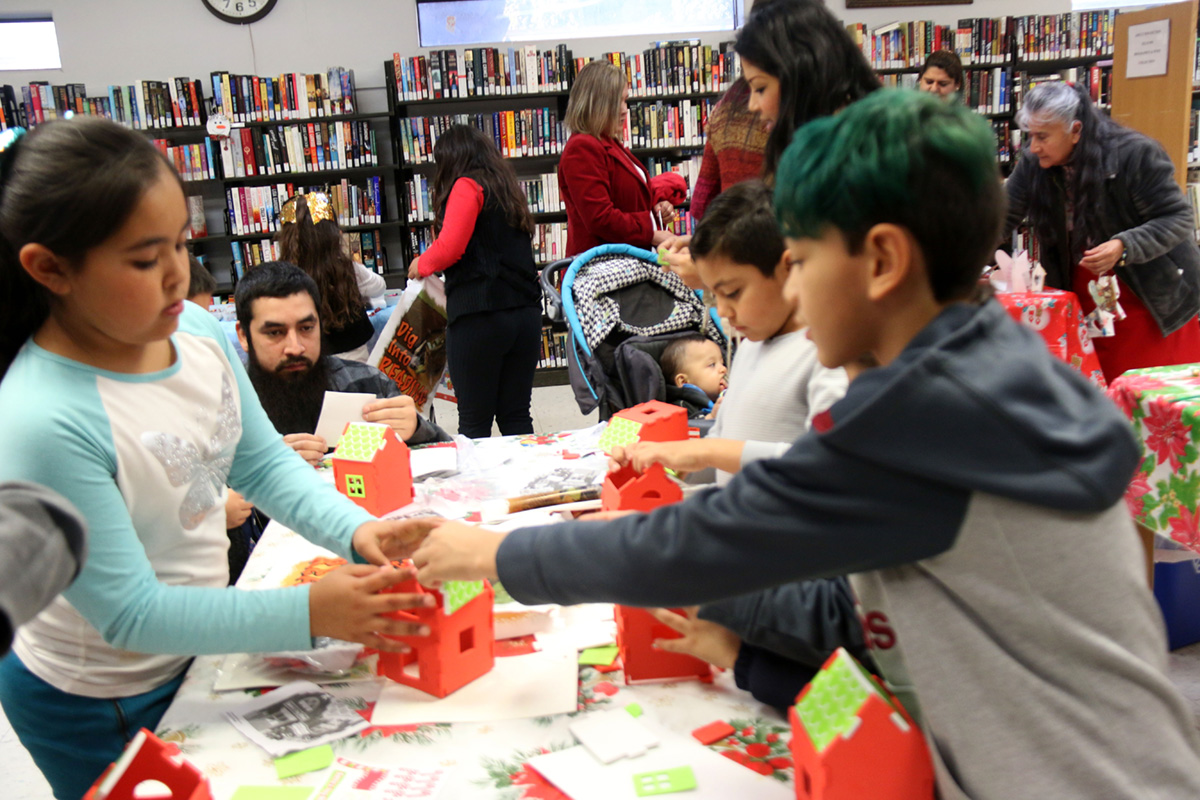 HOLTVILLE — Even among the bustle of holiday shopping, many busy adults will admit Christmas is most often about the children and the Meyer Memorial Library took this to heart Dec. 18 to create a winter wonderland to delight community youth.

From toddlers with caregivers to kindergarteners through sixth graders, nearly 50 students from Finley Elementary and Pine schools made their way through chilly December streets to discover the grandeur at the Holtville book mecca.

The goal of Lorenza Carpenter, library assistant, and her helpers, was to stimulate imaginations and a watchful an eye was kept on the clock while the countdown crept toward the arrival of Father Christmas.

This was a hands-on experience that challenged the minds and coordination of children to solve the mystery of a knock-off Lego set to construct replicas of Santa’s Toy Shop.

Sebastian Castellon, a fourth-grade student at Finley School, flashed the natural-born nimbleness of a Thomas Edison. He assembled his toy shop so efficiently he was able to shepherd classmates Noah Flores, third grade, and Kitzia Velasquez, second grade, through the maze of construction.

“You have to put it flat (Lego pieces), snap it together and then you flip it,” Sebastian encouraged his classmates.

Noah, watching Sebastian out of a corner of one eye and assembling his toy shop with another, struggled at first yet eventually caught up with Sebastian.

“I spent more than five minutes putting on the roof of this house, now it’s getting hard. I thought you said it was easy,” protested Noah, before adding, “Oh, I see. You have to turn the edge of the roof with this side down.”

But once their pieces were assembled Noah and Kitzia gleefully pealed back the protective layer of the adhesive side of the stickers and decorated their dollhouse-sized toy shops with colorful candy canes, mistletoe and, yes, even tiny reindeer.

Joseph Flores, Noah’s second grade kid brother, thought the Santa’s Toy Shop was a “cool project” but was eager for the visit with Santa since he wanted two special things.

“One of the special things is Ryan’s glow-in-the-dark treasure chest (aka: wonder treasure chest),” said Joseph. “I’ve seen it on TV a lot and it’s very cool. And, I want Ryan’s World giant mystery egg. It comes in lots of colors but I want the light blue one.”

Working diligently piecing together his Santa’s Toy Shop was Jaden Gutierrez, a kindergartner at Pine.

“My favorite was the snowman because it’s made out of snow (construction paper),” said Jaden.

Luis Gutierrez, his father, helped Jaden aim an indoor version of the bean bag toss (feathered Christmas tree bulbs) through the slots of the grid.

“I like this (library crafts),” said Gutierrez. “He likes Legos at home. He’s very creative.”

Just when the children were most engrossed with their projects, Georgina Camacho, Holtville Planning Commission president and Library Summer Program director, at last announced the arrival of Santa Claus. Jaden Gutierrez, one of the first to visit with Santa, gave the old gentleman a bear of a hug when presented with his bag of treats.

“I can open these right now?” he asked his mother, Jocelyn Barraza.

“This was a fun experience,” said Barraza. “We’re just staying home in Holtville for Christmas and visiting with my mom.”

Allison Ortiz, a Finley kindergarten student, stopped at the library checkout desk to thoughtfully write out a Christmas wish list that included a bicycle and a set of monkey bars.

Carefully sorting through their Santa treats by the library exit were Joseph and Noah Flores. Joseph brandished an animated movie poster while Noah reticently brought out his comic book, Doctor Strange (2018) by Mark Waid and Jesus Saiz.

“I think it’s wonderful the library puts on this nice little visit with Santa,” said Chloe Flores, the brothers’ mother. “It’s great for the children in the neighborhood.” Added Carpenter, “Today was a wonderful day and we thank the community for coming to visit with Santa.”