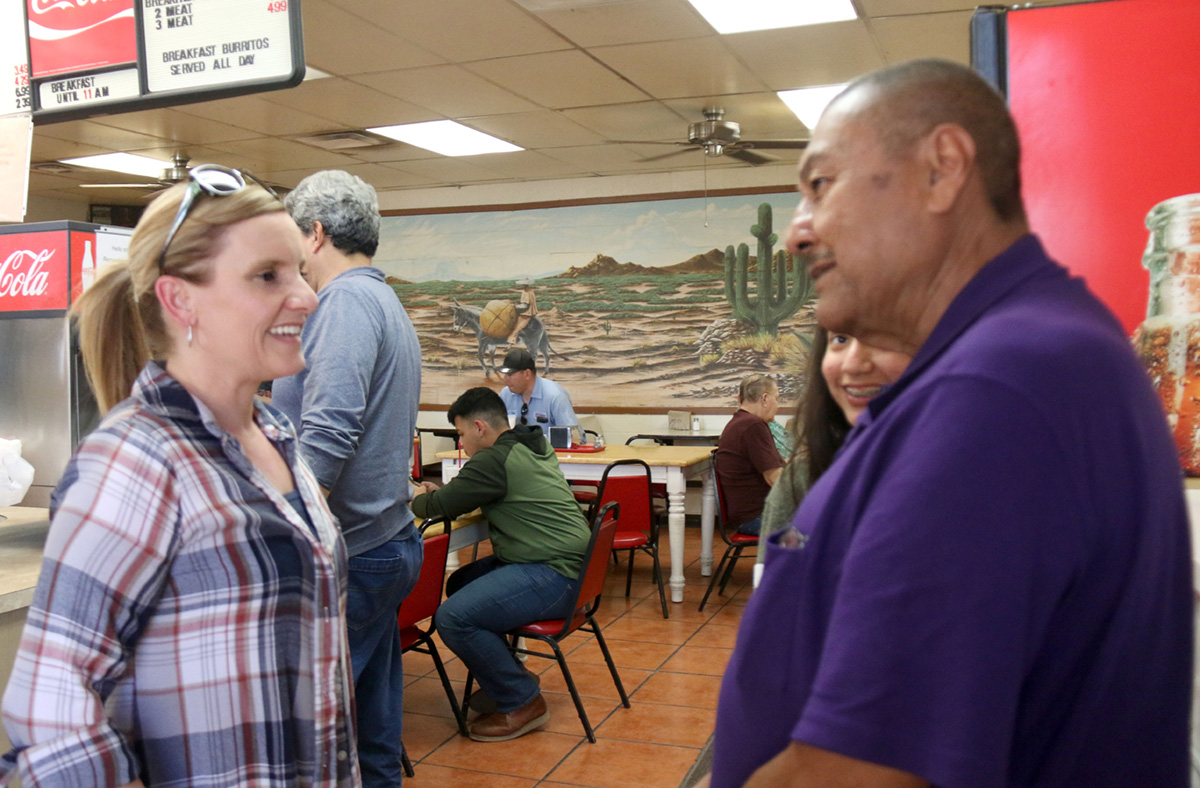 Holtville’s Taco Shop a Culinary Delight for a Generation

HOLTVILLE — A popular eatery, The Taco Shop in downtown Holtville, has served up hearty Mexican and American comfort food for nearly three decades, growing since Missy Hernandez re-acquired the restaurant from other family members.

“I think it has to do with our family being in Holtville so long (grandparents farmed alfalfa) and the community being family oriented, because we’ve seen a lot of restaurants come and go,” said Hernandez current sole owner and also the office manager of Vic’s Air Conditioning & Electrical Co. “We feel very lucky for being part of the Holtville business community.”

The restaurant at 404 E. Fifth St. is community focused and employees have all had to weather with crises, including the deaths of family members, yet help each other prevail, Hernandez maintained. It was her parents, Jim and Linda Birger, who started The Taco Shop in 1992 after 40 years of farming.

Hernandez first ran the shop from 1999 to 2004 and then took it over again in 2012. In between it was operated by other family members.

“My mom is still a big part of it and she stills lives on the farm but now leases out the land. She’ll pick up nacho cheese or supplies in general for us and helps out when she can,” said Hernandez.

The Taco Shop is woman owned and mostly woman staffed. Kytzia Guzman, the manager, has worked there for more than a decade and the rest of the crew is also long-tenured.

“I don’t think I could run the restaurant without the help of family and friends,” said Hernandez. “A friend, Henry Nilson, is a farmer I’ve known my whole life just from being in Holtville. He comes in to the restaurant at 5 a.m. and turns on the grills and gets coffee going every morning.”

Also lending a hand are Judy and Kayla Dotson, respectively Hernandez’s aunt and cousin, who make the menus and run the restaurant website. Middle daughter Brittney, now with a year-and-a-half-old child of her own, pitches in with bookkeeping chores part-time … “but she’s a full-time mom,” Hernandez added.

“I wanted to keep the restaurant open to keep the memory of my dad (who passed away 2003) alive,” said Hernandez. “But then, pretty much my extended family showed up to help out. My son-in-law, Zach Bingham, helps with plumbing or leaks. We can always call Vic’s to help with refrigeration issues.”

The restaurant is known for tacos, of course, and carne or pollo asado, but the most popular is the Gordee, half al pastor (vegetable) and half carne asada. A Hernandez favorite is chili rellenos. It is stuffed with cotija cheese, battered and fried in oil.

“I’ve eaten these since I was a kid because they taste so good,” recalled Hernandez. “Our drinks are popular because of the crushed ice we fill up the cups with. We have a gallon pump of cherry syrup so customers can add cherry flavor to their soda.”

The Taco Shop is open from Mondays through Fridays 6 a.m. to 8 p.m. and on Saturdays from 6 a.m. to 7 p.m. Breakfast items may be ordered all day. Breakfast bowls, home fries, scrambled eggs with a choice of ham, bacon or other meat, are a brisk seller, as well as breakfast plates with a variety of omelets.

Dinner items can include daily specials such as menudo, a soup with tripe and hominy; albondigas, meatball soup; beefsteak ranchero or chicharron. Customers may dine in or take out.

An important tradition for The Taco Shop is helping out schools, especially the sports teams. It cooperates with C.J. Johnston, Holtville High School athletic director, to provide certificates for “Viking Meal Deals.”

The certificates are passed along to not just to the athletes-of-the week but often to the ones who consistently appear for practice and make the most effort. The restaurant also donates to Finley Elementary School for Halloween or the carnival with gift certificates and provides salsa for barbecues to Holtville Middle School or and other schools in Holtville.

“At Pine School they have a scholarship in memory of my dad, and the high school has named the football and baseball fields after my mom and dad because they used to work the concession stand during the games,” said Hernandez.

Despite working a full day for Vic’s, on weekends Hernandez will do shopping for ground beef, cheese, paper trays or hamburger buns for the restaurant and help Brittney with the bookkeeping. Being just down the block from Vic’s is an advantage since Hernandez can call in a lunch order and pick it up for the air conditioning technicians and office personnel.

One of her restaurant crew that she can always rely upon (as well as others) is Arlette Campos, who has worked for Hernandez for eight years.

“I started as a cashier for six months and then began cooking, but a year ago they needed help on the counter so I started serving again,” said Campos. “I like serving more because I can help customers choose their orders and I can carry their order out to their car if they need help.”

Campos said she has always worked in restaurants and was a shift leader at the McDonald’s in Nashville for several years in the early 2000s. She returned to Holtville in 2008 to care for her ill mother.

“I love The Taco Shop,” admitted Campos. “Missy Hernandez is really good and her mom, Linda, always takes care of what we need. If we ask for time off, she lets us have family time if we need it. They are friends with everybody.”

Hernandez praised The Taco Shop staff for their dependability.

“I think it’s because they’ve become a part of my life,” she confided. “I’ve been at the restaurant since I was a sophomore in high school.”

The only thing about the hospitality trade Hernandez said she finds irksome are the occasional unforeseen emergencies, such as a water leak discovered by the cleaning crew in the middle of the night.

“That sort of setback is trying,” she said. “We’ve had our struggles with business and family-wise, but with the support of our customers that’s what keeps me going.”

Previous
Carrot Cook Off Tradition Continues With a Few Tweaks