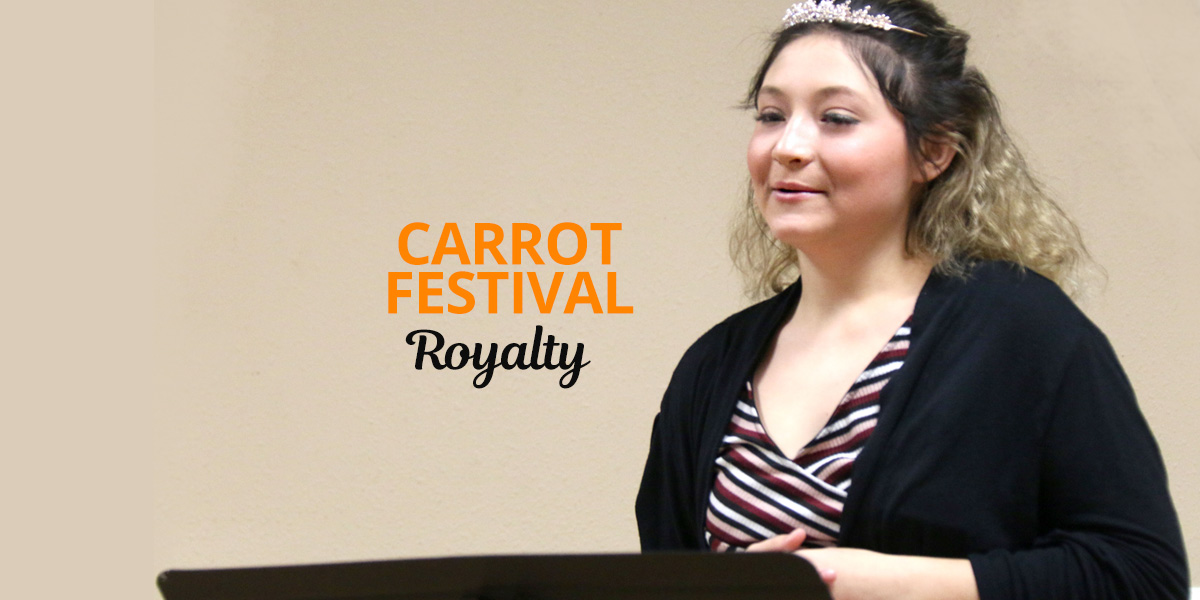 HOLTVILLE — Inaugurated in 2019 to expand a sense of community engagement, the Carrot Festival royalty contest speech competition allowed the hopefuls to articulate their desire to wear the crown.

The event was held in Holtville at the Civic Center on Jan. 29, just two days before the queen, princess and junior princess would be chosen. Candidates for junior princess were required to speak for two minutes, princess four minutes and queen seven minutes.

Though having the slightest of frames, Brytni Valenzuela, 6, a junior princess candidate, perhaps carried the heaviest burden by kicking off the night’s presentations. Rather than focus on herself, she concisely revealed her companion at school was a girl named Kelci and she wanted her best friend to be proud of her.

“The responsibility of being a role model is not easy but I believe for girls my age, I am one,” said Brytni. “After high school I hope to go to college and continue to learn as much as I can. Learning new things is something I care about the most.”

Alyssa Valenzuela, Brytni’s mother, thought her daughter did well speaking in front of an audience.

“At first she does get a little nervous but once she gets going, she finds her voice,” said Valenzuela. “She was a junior princess last year and she wanted to do it again. She loves the farmers’ market, enjoys representing Holtville. We just moved here last September (from El Centro) but now she’s here, she feels just like one of the community.”

For another junior princess contestant, Carmella Vallencia, 9, her speech was about her passion for meeting new people and how she would love to represent the city in the Carrot Festival Parade. Her favorite activities are team oriented: cheer captain of the Viking Mighty Mites and competing on the swim team, she said.

“I like to be helpful and kind and I believe I can show others good leadership qualities,” said Carmella. “I also like to greet the new kids at school and help them get to know our school better.”

Monica Vallencia, Carmella’s mother, noted it was her daughter’s first time talking to an audience.

“This is new for her but she enjoys specking in front of people,” said Monica. “This is interesting and she’ll learn a lot from it. She likes to keep busy.”

Though only in seventh grade, princess candidate Lexee Roeseler, 12, is a veteran Carrot Festival parade attendee who said she always makes sure to meet the queen. She particularly looks up to Courtney Walker, the 2019 Carrot Queen and said she knows whatever she puts her heart into, she can accomplish.

However, she added she is savvy enough to realize representing Holtville is more than she thought it would be.

“I try to see things from other people’s perspective,” said Lexee. “I look forward to participating in all the events but it is challenging. I can’t wait for the coronation on Friday. I’ll get to have a long evening dress. I really enjoy dressing in formal wear.”

Lori Hill, mother of Lexee, admitted she was nervous for her daughter and said that even though Lexee takes on a lot she willingly embraces personal responsibility.

“She likes swimming because it is a team effort,” said Hill. “She’s raising a feeder calf and dairy goat for the fair. She wants to be a large animal vet. And one of her goals is raising every large animal within 4H and FFA.”

Mature beyond her years, queen candidate Alexis Piper, 14, said she believes she lives in a community that loves to support each other and that it is important to give back to one another. Being Carrot Queen carries a lot of responsibilities, she explained, particularly being a role model.

“I love being a role model to my little brother and I enjoy working with the kids in my study group,” said Alexis. “This requires dedication and that means don’t give up no matter how hard it gets, or even if other opportunities come. Yet with my fair coming up, raising my feeder calf, Boomer, and being co-captain of the cheer squad, I’m still ready to be the 2020 Carrot Queen.”

Results of the royalty court competition were disclosed at the coronation Jan. 31 at the Imperial Valley Swiss Club.

“You could tell they had fun with such big smiles on their faces and engaging the crowd so well,” she said. “It was such as honor to work with our poised young ladies.”