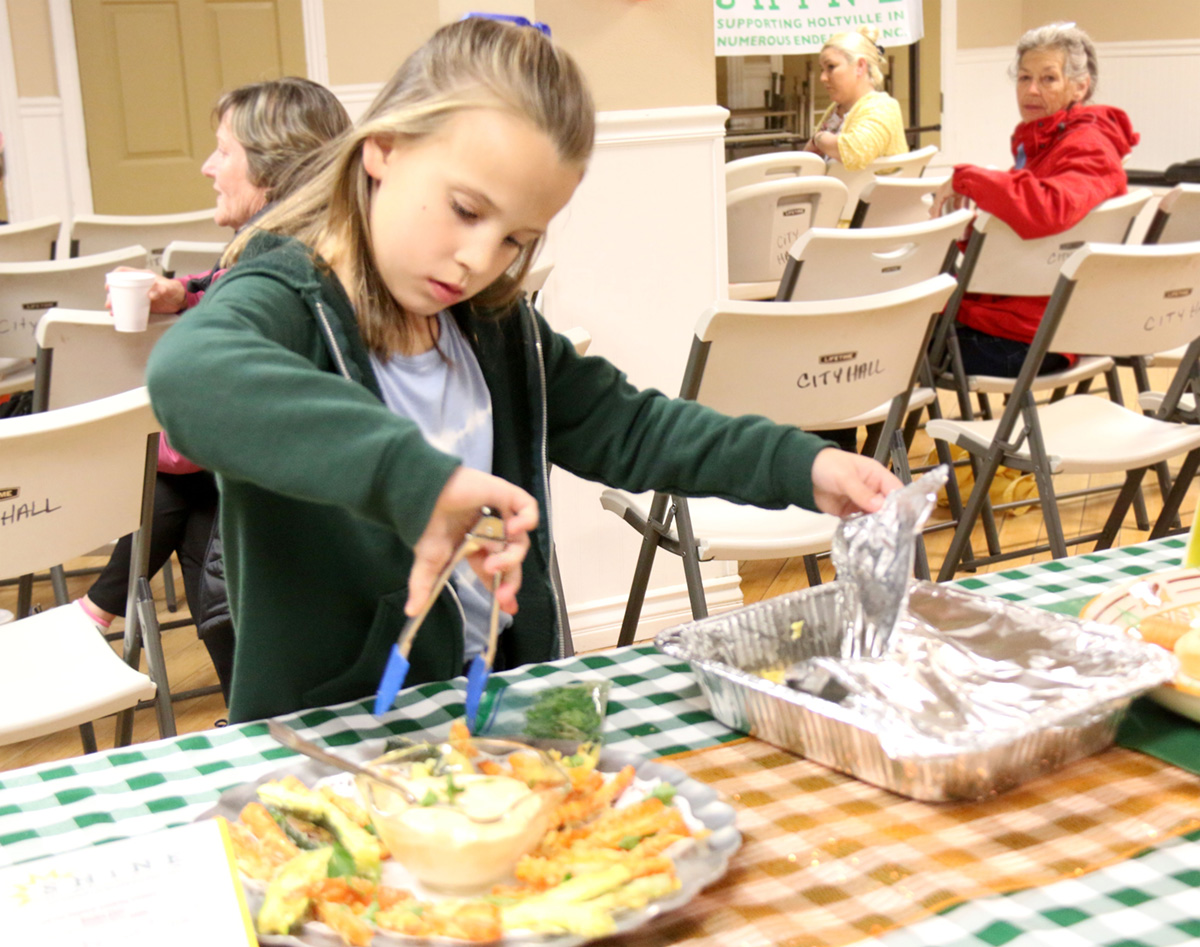 HOLTVILLE — It is a sure sign of praise when one of the guests of honor raves about a cook’s dish as a favorite among the many choices available.

At the 2020 Carrot Festival Cookoff organized by the SHiNE Club at the Civic Center on Feb. 5, visitors came to see, sample and evaluate culinary delights despite the blustery winter evening. The Little Chefs, kindergarten through fifth-grade students, displayed well-honed recipes, some of which were shared for the first time beyond their immediate families.

In attendance at their first official function as representatives of the city of Holtville were the newly coronated Royalty Court of the Carrot Festival: Queen Alexis Piper, Princess Lexee Roeseler and Jr. Princess Brytni Valenzuela.

Lexee delivered a keynote address to assembled guests, explaining that engaging in all the activities to which the Carrot Festival Princess is expected to dedicate herself, helped her to develop, taught her a lot and compelled her to grow up. Lexee noted she has had a lot of support from her mother and other family members

“It’s an incredible opportunity representing Holtville as the 2020 Carrot Festival Princess,” said Lexee. “One of my good friends, Blaze Vessey, made a salsa with mango and carrots–super good. It was like a creamy salsa with chunks that added a nice crunch. That one was delicious and was one of my favorites. I also like that so many people came out and that I knew most of them. They feel like family to me.”

“I just think it’s great for the kids,” he said. “I’ll definitely return for the adult category cookoff (Feb. 6). You never know what tomorrow brings. I love carrot cake; it’s just so good. This is a wonderful program that’s a traditional favorite, and a hit with winter visitors.”

A multiple place winner in all three categories; appetizers, main dish and deserts was Dillion Anzures, a first-grade student at Finley Elementary School in Holtville. Receiving a first-place finish in appetizers for his Carrot Pot Pie, he also scored second place for a main dish, his Rabbit Bait Carrot Soup, and second for desserts, Carrot Ice Cream sandwiches.

“This is my second year (competing),” said Dillon. “I feel great about this (all his awards). I like to cook because it keeps me busy and I’ll be back next year.”

Kimberly Schiltz, mother of Dillon, explained she is very proud of him.

“I started entering the cookoff when I was in kindergarten, so it’s a tradition (for us),” she said. “Dillon often will ask at home, if he can cook with me. I try to persuade him to come up with his own recipes. He wanted something like chicken noodle soup, but of course it had to have carrots. He’s not a picky eater and really likes nearly everything.”

Winning first place for the main dish, was Ben Cano, a first-grade student who is home schooled. His winning entry was Roasted Carrot Pizza, an original concept developed with a little help from his family.

“I entered the cookoff last year but I’ve been cooking since I was three,” he said.

Candice Cano, his mother, explained she was not sure if Ben would compete this year.

“He asked this morning when the cookoff was and I reminded him it’s today,” said Cano. “Were always cooking at home and he actually grew his own spinach (in a hydroponic garden). He’s been gardening his whole life and started in our own back yard.”

A first-time competitor, Stacy Williams, a first-grade student at Finley, won first place for desserts with her Easy and Delicious Carrot Cake.

“I also like salads; lettuce, celery, tomatoes, olives and sometimes strawberries,” she said. “Cooking is sometimes a challenge but it makes me happy. I also like Mexican food, especially tacos.”

Other chefs who placed were: Hazel Vessey with her appetizer, Carrot and Zucchini fries, Beaus Williams for his appetizer, Marmalade Carrots, and Elizabeth Schaffner for her dessert, Carrot Cake Pops.

“It’s a pretty cool deal. I’ve never been to something like this,” said Craig. “It’s my first Carrot Fest and I definitely enjoyed it. I’m returning to Killeen to start my own towing business.”

Betty Predmore, mistress of ceremonies, was upbeat about the cookoff’s success, saying, “We had a great group of kids with some interesting dishes. It was a great panel of judges.”

Previous
Carrot Festival Goes Beyond Its Name for Culinary Delights

Next
Carnival a Colorful and Thrilling Launch to Carrot Festival