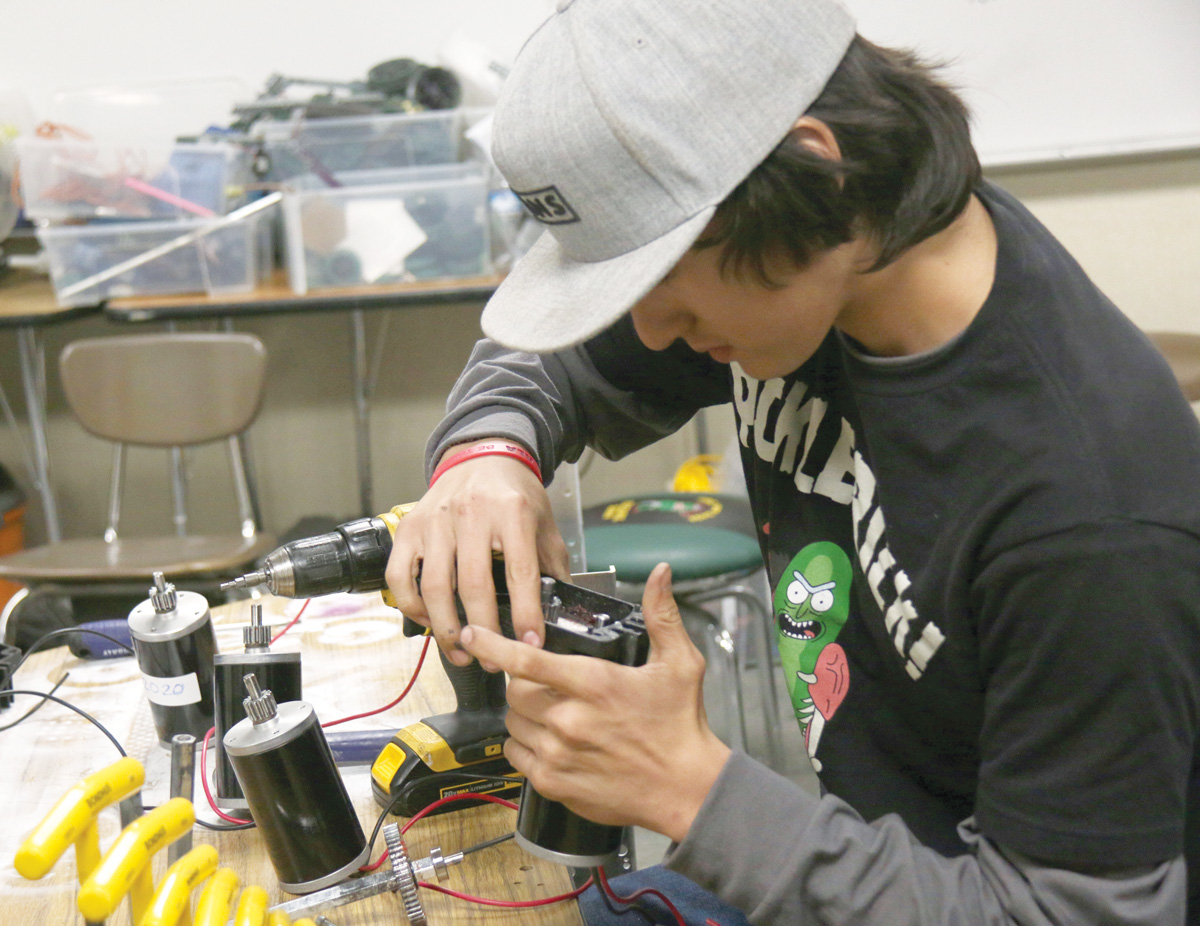 A love of math and science is leading two Holtville High School students to pursue an extracurricular activity that could mold their career paths.

Senior Isbed Garcia and junior Inez Rosales are co-captains of the FUTURE Dinos No. 3491, the Holtville chapter of scholastic robotic competition. The effort was spurred by their involvement in the Imperial Valley Mathematics Engineering Science Achievement program in middle school.

The team has several members and is advised by Marisela Valenzuela, who also teaches eighth-grade science at Holtville Middle School.

“I was in MESA and it was heavy in the sciences but I wanted more of a building program,” Isbed recalled. “There was a small robotics program and I started with Lego robotics. We assembled it, then we had to code it so it could move it in all directions.”

The experience was invaluable and led to some success, she added.

“We had to conform to the game design, steer through an obstacle course, steering in and out of boxes along the course. We took third place among Imperial Valley schools but we were not so successful in the regionals for Southern California,” Isbed said.

MESA serves 18 schools in Imperial County–eight high schools and 10 middle schools. For many students MESA inspires students to become more involved with STEM (science, technology, engineering and math) classes. It helps many to see the connection between STEM and industry.

Inez also built Lego robotics in middle school and said that caused her to want to learn more.

“We learned as we go and it was really fun, so when I got to Holtville High School I wanted to continue on.” she recalled. “But at the high school level we use power tools and that is a bit of a challenge.”

For the first two years of high school Inez said she did all the social media for the robotics team as they wanted to stand out from other teams. She has posted examples of the team’s current projects to Instagram.

“We had plans on how to score points in competition,” she said. “We’d livestream videos and we got a lot of likes from students, mostly those at HUSD (Holtville Unified School District).”

This semester the team is working on a project called a drive train. It has the foundation of a whole robot (similar to a car chassis) with a small motor. It is used to power a drive train or other mechanism. The direct-current motor is 2.5 inches in diameter and kicks out 337 watts of power.

“We’ve been working on this project since January and expect to complete it by the end of March,” said Isbed. “Then we go to our ‘Infinite Recharge’ (this year’s theme) competition at the Orange County Events Center April 1 and April 4. Competing teams are mostly from California but one is from Turkey.”

Isbed also explained she is already looking at colleges.

“My first choice is UC (University of California) Irvine and my backup school is Chico State University,” she said. “I’m hoping to get into an aerospace company, or something along those lines.”

Inez has also begun looking at college with a major in mechanical engineering at either UC Irvine or San Diego State University. As such, her current efforts keep her busy.

“We’re here at the robotics team every day except weekends,” she said. “It’s a lot of teamwork and we all work together to score well at competitions.”

Isbed pointed out that at the competition teams will be grouped with two other teams to establish a ranking and then get scored on overall points The top teams will advance to quarter, semi and grand finals in which individuals as well as teams will be awarded ceremonial plaques for various categories.

Categories include best design, best rookie team and the Chairman’s Award, the highest honor given to recognize the team that is the best role model.

However, it is apparent other teams are better funded, though that can offer an advantage, the students noted.

“We work with the tools we have and hope our ideas can carry the day,” said Isbed. “Sometimes a simple design can work as well as a complex one. We want to show our ideas can be competitive even on a smaller budget.”

Jacob Imperial, a sophomore, is participating in his first year of the robotics team and said he has mechanical experience doing auto mechanics with his father. His father is a maintenance manager for AT&T cell phone towers.

“When a cell tower goes offline, he’s the first one contacted,” said Jacob. “I enjoy working with my dad on his vehicles but it’s the only time I work on cars. I want to be a mechanical engineer or a diesel mechanic. This is a great team. People are very inviting and the administrator (faculty advisor) is very encouraging.”

Valenzuela is in her first year as team advisor and noted she is impressed with the skills demonstrated by the students.

“The students actually know more than I do,” she confided. “But they approached me to be their advisor. At first I thought it would be overwhelming, but it is not. You can see, they are on task and very independent.”

The cub’s out-of-the-area competition has benefits that go beyond just creating an entry, she added.

“For robotics competition students have the opportunity to meet students from France, Germany and all over the world with the same interest and can compare and contrast experience and knowledge. From there, they can move forward in their chosen field,” Valenzuela said.

Next
Carrot Festival Goes Beyond Its Name for Culinary Delights