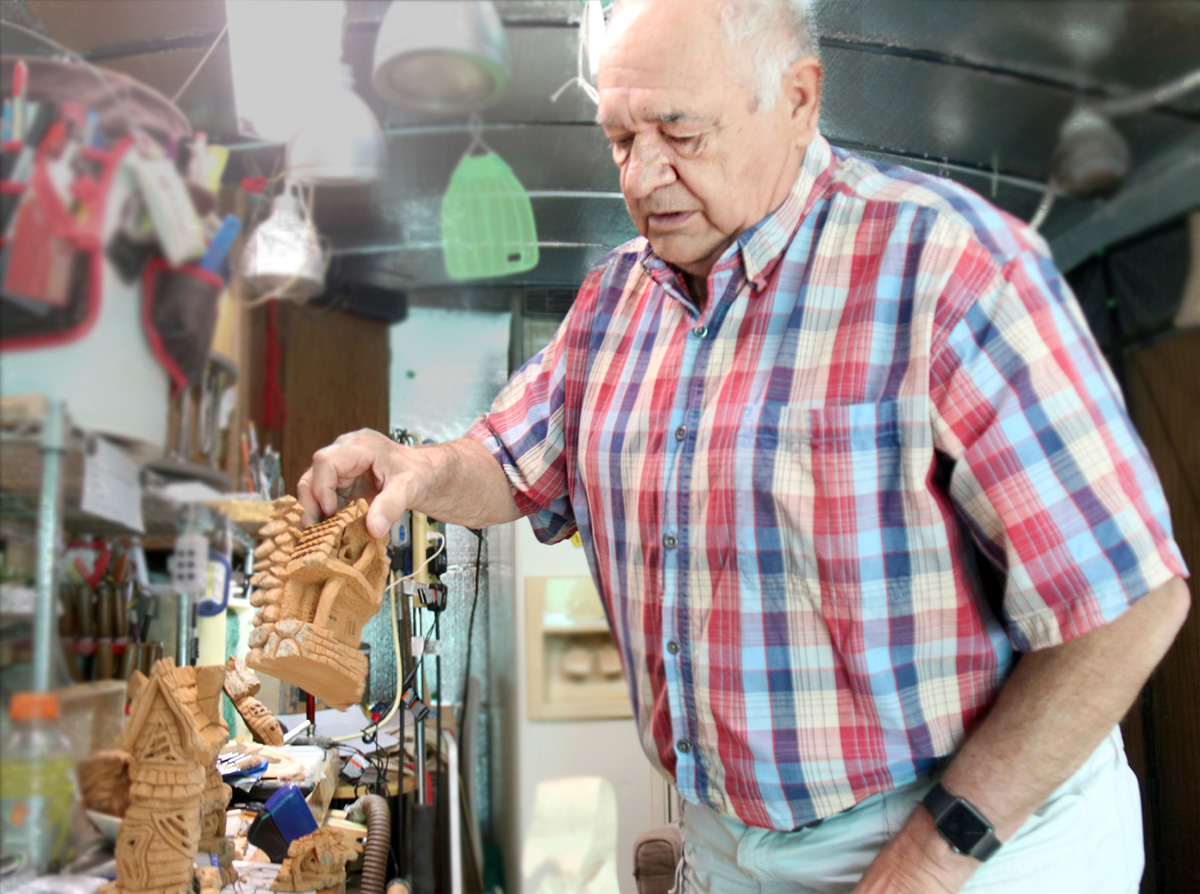 Reynold Brix, co-manager along with his wife, Karen, of the U.S. Bureau of Land Management campground at the hot springs east of Holtville, shows off some of his hand-made wood sculptures. | William Roller photo
Home
Featured Stories
In Featured StoriesLocal News

HOLTVILLE — A Midwest transplant who now manages the camping area at the hot springs east of Holtville came from a far different background and admits even he was surprised by the transformation.

Reynold Brix spent 28 years in the coating department of International Paper Company in St. Paul, Minn. The job involved applying a high-gloss coat on paper stock for a variety of paper products, primarily magazine pages such as those used by National Geographic, he explained.

“Then we (with wife Karen) went into the Bureau of Land Management stewardship .. like an idiot,” Brix said sarcastically during a Feb. 14 interview. “But it can be a very nice job, depending on the neighbors.”

The hot springs are a popular gathering area for snowbirds, winter visitors from the northern U.S. and Canada. Many there practice hobbies and one even started a garden in a converted 55-gallon metal drum growing tomatoes, lettuce, peas and flowers.

“You can’t do nothing, can’t sit there and do nothing. I like woodcarving. I just got this done so I can get around. I just had hip surgery,” he said showing off a slightly curved walking stick almost as large as a shepherd’s staff.

Brix has been woodcarving for 48 years, he explained as he handed over his business card. It reads, “Fantasy Dreamscapes, Carving Instructor and Wood Carvings for Sale.” It is from his former woodshop in Minnesota.

He then showed off a tall intricate sculpture similar to a stone frieze, the decorative band on an outside wall or column on classical Greek or Roman buildings. The sculpture is fashioned from basswood. He also had a series of small houses made of cottonwood.

“I’ve done a lot of carving, flowers, and I like artifacts from the 17th Century,” he said.

The Brixes’ journey to the Holtville area began after he retired from the paper plant and Karen closed her business, a men’s tailoring shop.

“But she’s the mayor,” Brix joked about the hierarchy in their ‘town.’ “I’m the fire and police chief. But we don’t have to pay for our BLM plot. Our RV is 40 feet long and it’s eight feet wide. We don’t need to pay the electrical bill. We’re hooked up to the county grid, the only ones here (that are).”

Prior to arriving at the hot springs, Reynold and Karen managed the Tamarisk Mobile Home Park in Palo Verde in far northwestern Imperial County.

The hot springs averages 80 RVs between December and February. Some guests come from as far away as Vermont, New York and Connecticut but also the Midwest, noted Karen. Overall, about 40 percent are Canadian and the rest American.

“Most are retirees,” said Karen. “But we do have some home-schooled families. Some are working right now, a welder. One year we had a field worker who was here for two seasons. We’ve been here only five years.”

Unfortunately, BLM changed the rules last year and mangers can now serve only three years in one location. So the Brixes will need to move to another site in the fall. BLM has several openings and they get to decide whether to take it or not.

On the same day Brix was interviewed a fire broke out in an RV in the camping area.

“I took the (Holtville) fire chief (Alex Silva) down there to the burning RV,” he said. “At first flames were coming out of the roof and then the whole RV caught fire, but they couldn’t save it. It was just the one RV and some brush (that burned).”

What is sad about the fire, explained Brix, is that even if the fire department was located across the street, it might not have made a difference because RVs burn so fast. This is due to the materials from which they are manufactured.