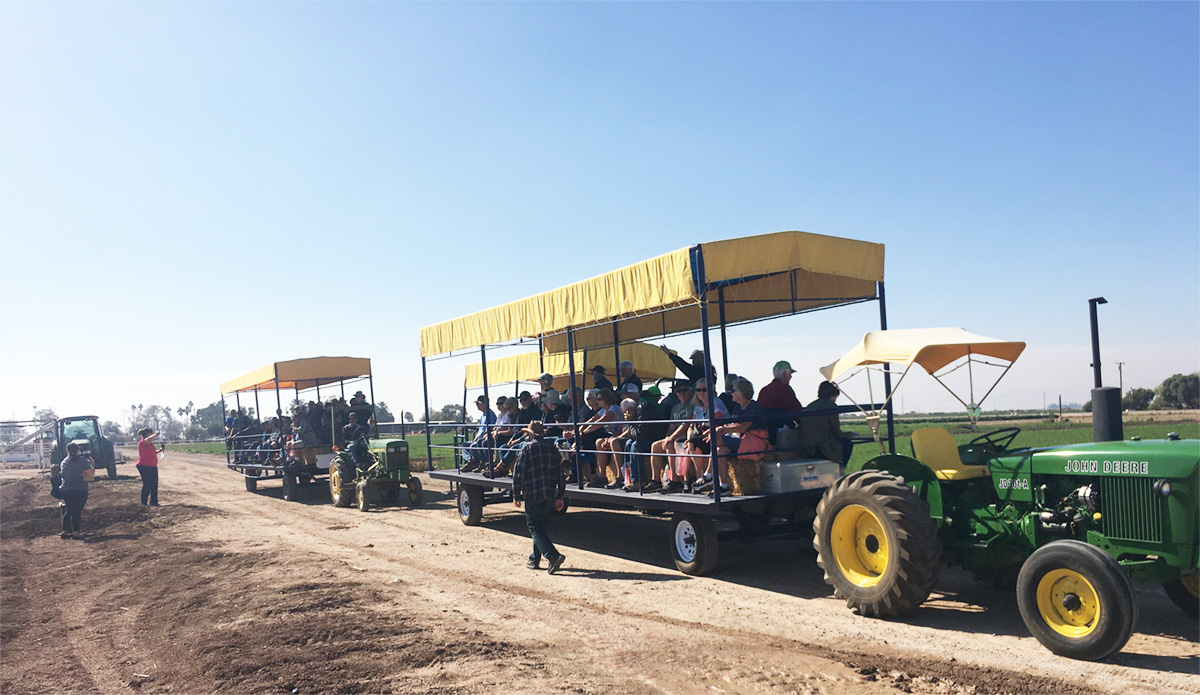 IMPERIAL VALLEY — About 80 people attended the Farm Smart program agricultural tour on Feb. 13 at the University of California Desert Research and Extension Center near Holtville. The tour offered information about the agricultural land and its crops, and the center staff was available to answer participant questions.

The highlight of the event was when each participant harvested their own pick of vegetables–cauliflower, cabbage, beets, turnips, Swiss chard, head lettuce, Daikon radishes, broccoli, carrots and onions.

Three wagons carrying the participants were pulled by tractors.

Among the participants was Sal De Casas from San Diego who said the event was ideal for someone like himself who eats a lot of vegetables.

“I found out about the tour from being on the list of University of California Ag Systems. This is my first time I came. I picked a little bit of everything,”  he said, adding, “most of my vegetables I consume raw, or I can boil them or slice in a salad.”

The winter bounty was impressive for Midwesterners Don and Charolet Hanson. Imperial Valley, it is said, grows a good share of the winter vegetables in the  U.S.

“We live on a farm in Aredale, Iowa,” Don Hanson noted. “We don’t grow any of this stuff.  We grow corn one year and then soy beans the next year.  We grow a garden too, but for a shorter growing season.”

Stacey Amparano, Farm Smart program manager, and Stephanie Collins, community education specialist, were giving the tour and drove the wagons through various areas of farm land.  As the wagons stopped, Collins and Amparano would step off, give an overview of that area and answer questions.

The tour included a top-10 question at each stop. The UC staff would ask a particular question about that crop and the person who answered the question correctly won a small gift.  Such outreach is important, Amparano explained.

“The purpose of Farm Smart is to teach people where their food comes from.  Most programs are for IV (Imperial Valley) youth,” she noted. “It doesn’t start with the grocery stores but the life from where it starts before and the nutritional and handling on activities. We put them out on a wagon and let them harvest their own vegetables.  It’s an amazing experience for the kids.”

However, as the recent event demonstrated, the Farm Smart tours are very popular with winter visitors as well.

“Since start of the program in 2001, we have had a lot of snowbirds and curiosity of how do you grow vegetables in the middle of the desert and during summer,” Amparano said. “It is not just for visitors but for local communities. We teach people about our local ag and the importance of ag in the region.”

COVID’s Latest Surge to Stick Around till 2022

The tour was an eye opener even for long-time local residents such as Oreda Chin and Sara Cruz.
“We came because we met Stacey at a class together for non-profit organizations and she shared what we did and told us about this tour.  I worked here (in the Imperial Valley) and have always wanted to come to a farm tour,” Chin said. “I had no idea that there was so much grown here and have a much better appreciation for farm workers.”

Added Cruz, “I learned more here on this tour than in my whole life.”

“Farm Smart is community funded.  IID (Imperial Irrigation District) is a large donor and other local entitles such as the Farm Bureau, Keithly-Williams Seeds,” she said.

This story is featured in the Feb, 2020 e-Edition.