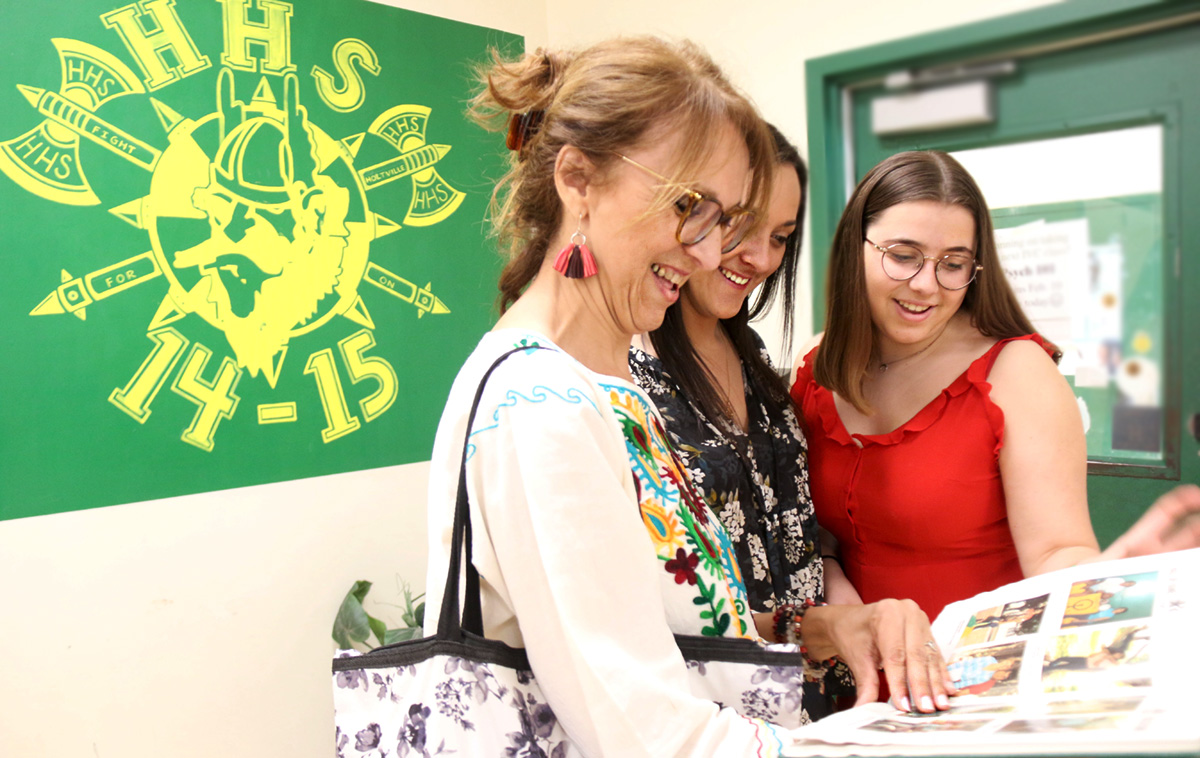 HOLTVILLE — It is often said travel is an education and for one graduate of Holtville High School all the mileage she has logged has possibly earned her a master’s degree.

Isabelle Roucoules, from the Lyon area of France, was an exchange student in the 1983-84 academic year when she graduated from Holtville High School that June. Anna Ruiz, a Holtville native, was Roucoules’s host student and close friend and followed with her own graduation in 1985.

“I was the one who initiated the student exchange stay (in my family),” said Ruiz during a tour of the high school campus on Feb. 18. “She’s like another sister and everyone in my family adores her. She’s such a sweet person.”

Touring through the gym and then the livestock pens, as well as the woodshop, Roucoules marveled at the diversity of how the curriculum expanded since her studies there. She explained how in France there are no extracurricular activities, just academics.

“It’s (school) changed a lot but for the better, but the city has stayed the same,” said Roucoules. “I also came back in the ‘90s and it’s similar to what I remembered. But now, the high school has improved really well. In 1984, they had the animal barns but I didn’t know what it was about. I was 17 and didn’t realize the livestock and agricultural programs were for student education. But I feel like I’m coming back home.”
Ruiz met up with Roucoules in Las Vegas recently to welcome her back to the states. They hiked the Red Rock Canyon and the Valley of Fire State Park.

“It’s beautiful and we’ll be in San Diego tomorrow (Feb. 19) with another classmate, Claudia Garcia, who will show us the sights,” said Roucoules. “I wanted to show my daughter (Marion) and my niece (Zoe Carriere) the Holtville High School.”

Roucoules also got to tour through the Holtville hot springs, an area east of the city that draws numerous winter visitors.

“We liked it very much. It is very different from France,” said Marion.

Added Roucoules, “That is the kind of experience we could not ordinarily do …only with connections in the area. We also went to Glamis and got to see the dune buggies.”

Ericela Bolin is Anna Ruiz’s younger sister and was 13 in 1984. She recalled Roucoules has returned to Holtville several times, accompanied by her husband, mother and children.

“Isabelle is a smart, smart girl,” said Bolin. “She speaks three languages. And she loves to walk. We’ve often walked all over Holtville. She loves Mexican culture, and the food, especially tamales.”

Ruiz last saw Roucoules two years ago and prior to that in 1996 when Ruiz was on active duty in the Air Force and stationed in Hungary. She flew to Paris on leave and took a train to the Lyon area to meet Roucoules.

“I met her parents and then saw her husband and kids again,” she recalled. “Seeing Isabelle again was so wonderful. She’s like an older sister and everyone in my family treasures her. She is such a delightful person.”