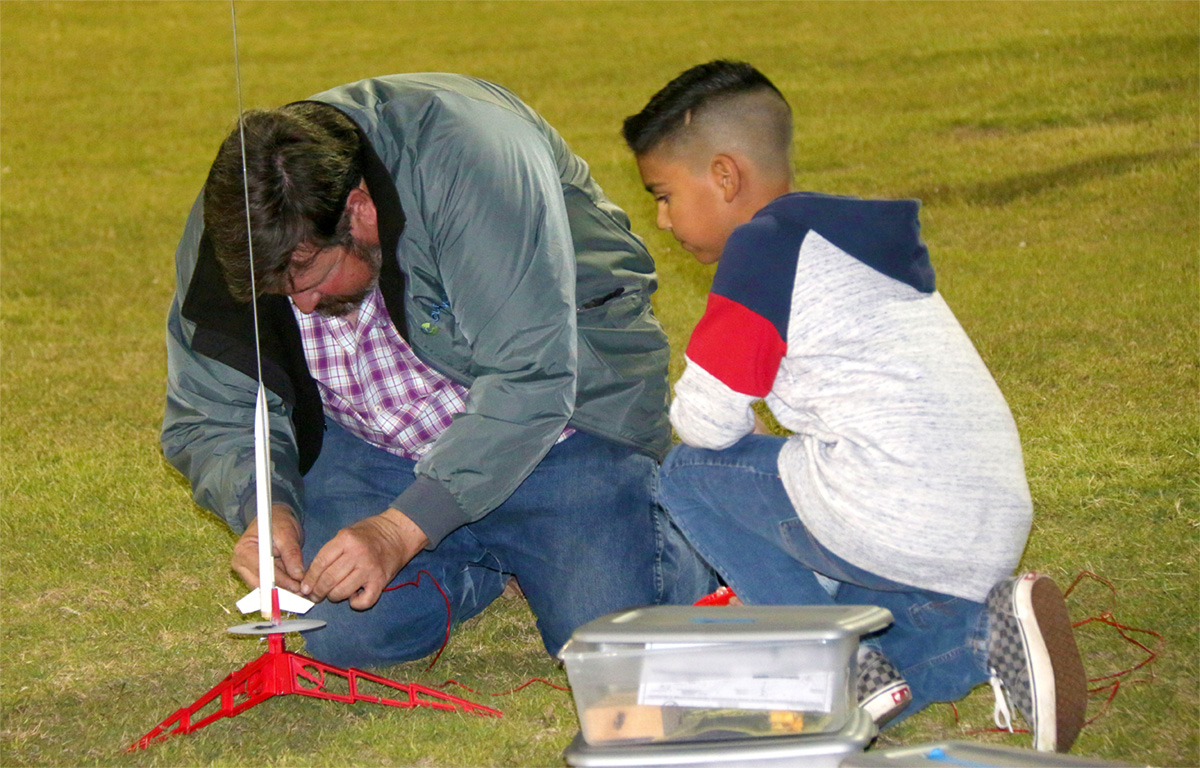 Celebrating on the penultimate evening of a spiritual program to bring children closer to Biblical scripture, the Cornerstone Church in Holtville held a special evening for some of its youngest congregants on Feb. 19.

Kids 4 Truth is a program designed to teach pre-kindergarten through fifth-grade students Biblical lessons through memorization and some fun games, explained Heather North, program coordinator. The goal is having the students apply what they learn to their own lives.

The group meets Wednesdays from October to March. About 20 children have been participating and were able to show off what they learned.

“For the girls (as well as boys) they have Bible instruction and then the girls display the crafts they produced which highlight some of the scripture they’ve studied,” said North. “And tonight the boys will shoot off rockets they made themselves. Then we hold a free raffle so they can enjoy the shaved ice truck.”

For the final Bible lesson children were taught that God, since he is all knowing, knows that sin is in people’s hearts, said Donna Schoenmann, a veteran church attendee along with husband David, and a children’s mentor. However, if forgiveness is sought, the transgression can be blotted out, she explained.

“Our big thought is to know who Jesus Christ is. The way to salvation is that we are saved through the grace of Christ, which changes the heart and our lives, and we are showing that concept tonight,” said Donna.

Just as the final moments of dusk began to fade the boys from Cornerstone gathered in a church classroom to put the finishing touches to the rockets crafted during the prior weeks. John Moiola, a church volunteer, did a final quality check of student rockets and crated the missiles along with the launching device, pad and remote out to the soccer field just north of the church.

We Have a Problem

Isaiah Enriquez, a fourth grader at Finley Elementary School, accompanied Moiola out to the launch pad and watched as Moiola prepared for the firing. Holding the remote Isaiah did the count down as his fingers disappeared into his palm.

Unfortunately, similar to early efforts at Cape Canaveral, his rocket did not manage to attain its target.

“My rocket misfired (after three attempts),” Isaiah lamented. “I like to launch them but as it lifts off it kind of hurts my ears. But I really liked building the rocket. Our teacher helped us along the way and if we asked if we could build it a certain way, he’d find out a way to help use our ideas.”

If there is one certain way to success, it is persistence. The next two flight attempts by Julius Charles, a fifth grader at Pine School, and Carter Nelson, a Pine third grader, saw both their rockets launch like the arc of an Olympic diver.

“It was fun to make the rocket and it only took a couple of weeks to complete, but it was not at all difficult,” said Carter.

David Schoenmann volunteered to watch over students to prevent anyone from getting too close to the launch pad during the rocket firings. It is important in small towns that churches and schools work together to help children get out with a caring group of adults to guide them, he explained.

“It’s really good to see the way the community supports the kids with all these family activities,” he said. “Holtville is a great town to raise a family. There’s great schools and service clubs, and the community is small enough you can get to know a lot of people.”

Previous
Sheriff Did Not Conduct Internal Probe of Attack on Deputy