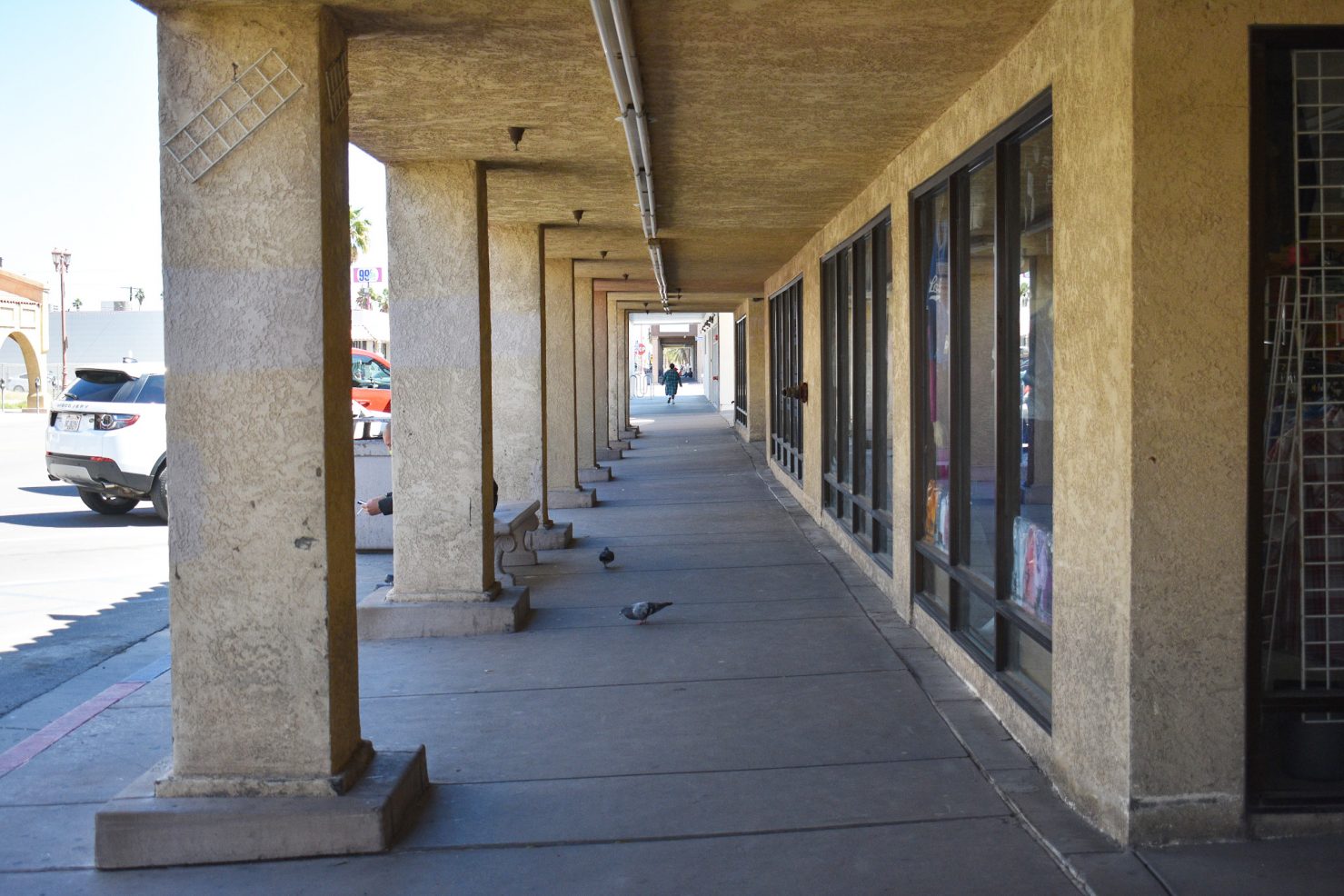 Forced non-essential business closures by the state coupled with federal travel restrictions on the U.S.-Mexico border all but turned downtown Calexico into a ghost town March 24. City officials say they've never seen anything like this before, and they expect the results to be "disastrous" to the city's economy. | CORISSA IBARRA PHOTO
Home
COVID-19
In COVID-19Regional News

MEXICALI — Although Mexicali officials have stepped up efforts to warn its 1 million-plus residents of the growing COVID-19 crisis, including enacting checkpoints, Imperial County officials don’t believe the new measures will affect our region any more than what has already occurred.

“Since there is already a reduction in traffic, I don’t see it (the checkpoints) affecting us more. However, if the virus goes out of control in Mexicali, there is a potential of a complete border shut down,” Calexico City Manager David Dale said March 31.

“It seems that the federal administration (United States) is ready to shut down the border if the virus gets out of control in Mexicali, and we don’t want that for obvious reasons,” Dale added.

The mandatory closure of nonessential businesses in California by Gov. Gavin Newsom that started March 20 and the decision by the Trump administration to institute travel restrictions into the U.S. from Mexico that same day was expected to have dramatically “disastrous” and “devastating” economic effects on Calexico and greater Imperial County, Dale said during an earlier interview with this newspaper.

Published reports estimate travel along the U.S.-Mexico border since March 21 has been reduced by some 70 percent, according to U.S. Customs and Border Protection.

County officials have agreed on the economic burden to this area, but they have also agreed with another point made by Dale, and that is the social distancing and stay-at-home orders meant to limit the spread of COVID is essential to the health and welfare of Imperial County residents.

“At this point, the border is restricted for non-resident aliens unless they have an essential need to cross the border. The shopping has been significantly reduced on this side of the border, but it is all for a good reason, to prevent the spread of the virus,” Calexico-area Imperial County District 1 Supervisor Jesus Escobar said March 31.

Mexicali is home to 1.033 million residents.

“I don’t think that (Mexicali officials’) announcement will add or subtract to the economic impact that our community has already sustained from the COVID-19 virus,” Imperial County Board of Supervisors Chairman Luis Plancarte said March 31.

In a letter addressed to the public and shared with local officials, which was signed by Mexicali Mayor Marina Del Pilar Avila Olmeda on March 30, the daily checkpoints will continue until further notice.

In the letter, residents were told they would be contacted during the city-wide checkpoints from 6 to 10 p.m., given a mask, literature warning of the virus and advising them to limit exposure by means of social distancing and avoiding gathering in public places and restricting movement to essential places of work and business. The letter also warned of nonessential travel through the port of San Felipe.

Luis Cueva is a fitness instructor in Mexicali who cannot commute across the border to teach fitness classes in El Centro because of the current restrictions to non-essential travel.

Aware of the recent announcement made by officials in Mexicali, Cueva told this newspaper he has planned ahead to avoid traffic congestion on his commute during hours when checkpoints would be open.

“I drove to my girlfriend’s house at 8 p.m. Monday evening (March 30) when the checkpoints were supposed to be in place. I drove through smaller streets instead of main streets to avoid the checkpoints,” he said.

“Usually these side streets are empty, and yesterday I could see lines of cars throughout the side streets. At that time, I also I saw the parking lot for a La Ley Supermercado was extremely full,” Cueva added.

Cueva offered a cultural insight from his point of view:

“A ‘Toque ve queda’ is an issue or warning from the government which you are supposed to respect that states you should not go out to social places. Like when you tell children they cannot go outside, they want to go outside. I think this is what is happening to a lot of people,” he added.

Conditions in Mexico By Comparison

As of the morning of April 2, the Baja California state government’s COVID-19 tracking page revealed 28 positive confirmed cases have come out of Mexicali, including 38 cases pending test results and 111 negative tests. Two people in Mexicali have died from COVID, according to the Baja site.

Baja state has reported 43 positive cases total and 1,378 cases for the country of Mexico, as of April 1. Some 37 deaths caused by COVID have been reported in Mexico as of April 1.

In 2014 Imperial County saw 18.6 million people traveling into Imperial County from Mexicali through the Calexico area ports of entry, according to a 2017 Imperial Valley Border Economic Impact Study.

Mexicali residents were believed to have spent some $380 million in Imperial County in 2016, accounting for 20 percent of all retail, food and drink sales in the county that year (of $1.93 billion total), according to the study.

“I think it’s a good thing for the city of Mexicali to increase the public’s awareness of the issue and we wish the best for our sister city in Mexicali,” Calexico City Manager Dale said.

Added Supervisor Escobar: “The increased restrictions in Mexicali are similar to the ones the Gov. Gavin Newsom placed in California several weeks ago. The checkpoints in Mexicali were instituted to make sure people follow the rules as much as possible.”

“The municipal government (in Mexicali) is taking a proactive step and they are taking action to reach out to the community in additional ways to people that may not be reached by social media or standard media sources,” Chairman Plancarte further explained.

For Imperial County’s end, Dale added, “We are following the governor’s mandate at this point. Clearly it is in the city’s and everyone’s best interest if all businesses are open, but people’s health is the mandate right now.”