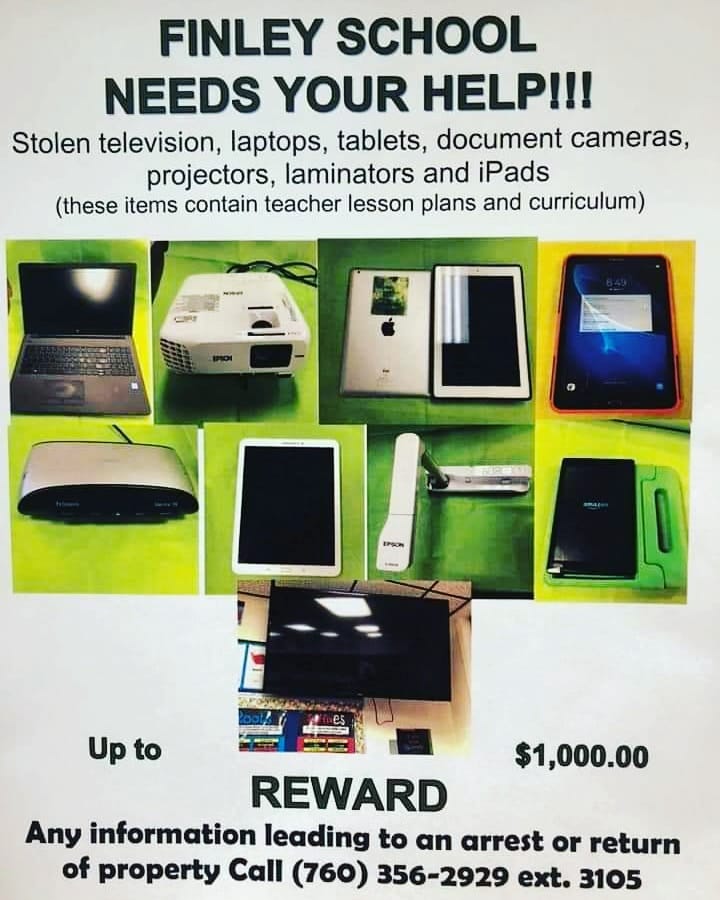 A Facebook photo shows a reward being posted for the return of items stolen during a burglary of electronic equipment from Finely Elementary School in Holtville. Unknown thieves or a single thief broke into classrooms March 20, according to school officials. COURTESY IMAGE
Home
Local News
In Local News

HOLTVILLE — Persistence paid off for Holtville’s Finley Elementary School as Facebook posts about a March 20 burglary at the campus has resulted in several items being recovered, according to school officials.

Several electronic devices stolen from several classrooms were found in the community thanks to the power of social media. Facebook posts about the burglary got around 40,000 views and were shared some 600 times, Finley Principal Lupita Perez told the Holtville Tribune during a recent interview.

“We’re happy with what we received until now, because we weren’t sure we’d get anything back,” Perez said. “For now, we got back about 10 percent of the items stolen. It’s a good thing word is out and hopefully we’ll get more of them back eventually.”

Burglars or a single burglar used tools to gain entry to multiple classrooms to steal several high-value items. But as of March 30, tips led to the recovery of one laptop computer, one iPad, one laminator machine and one document camera that were dropped off at one of the school’s neighbors, Perez said.

Perez declined to go into further detail on the case for fear jeopardizing the case.

She praised the efforts of the school neighbors who contacted the Imperial County Sheriff’s Office. Perez said she hopes neighbors persist in their surveillance of suspicious neighborhood activity since the school will need to rely on their assistance to close the case.

“Our community is doing a great job about reporting and we commend the community and hope they continue to report any suspicious activity occurring around the school campus,” Perez said.

Items still missing include a 60-inch TV, projectors, teacher laptops with lesson plans uploaded, as well as student tablets. Anyone who has information regarding the burglarized items is asked to phone 760-356-2929.

Sheriff’s Office personnel in Holtville have not responded to several requests for comment on the case by deadline.