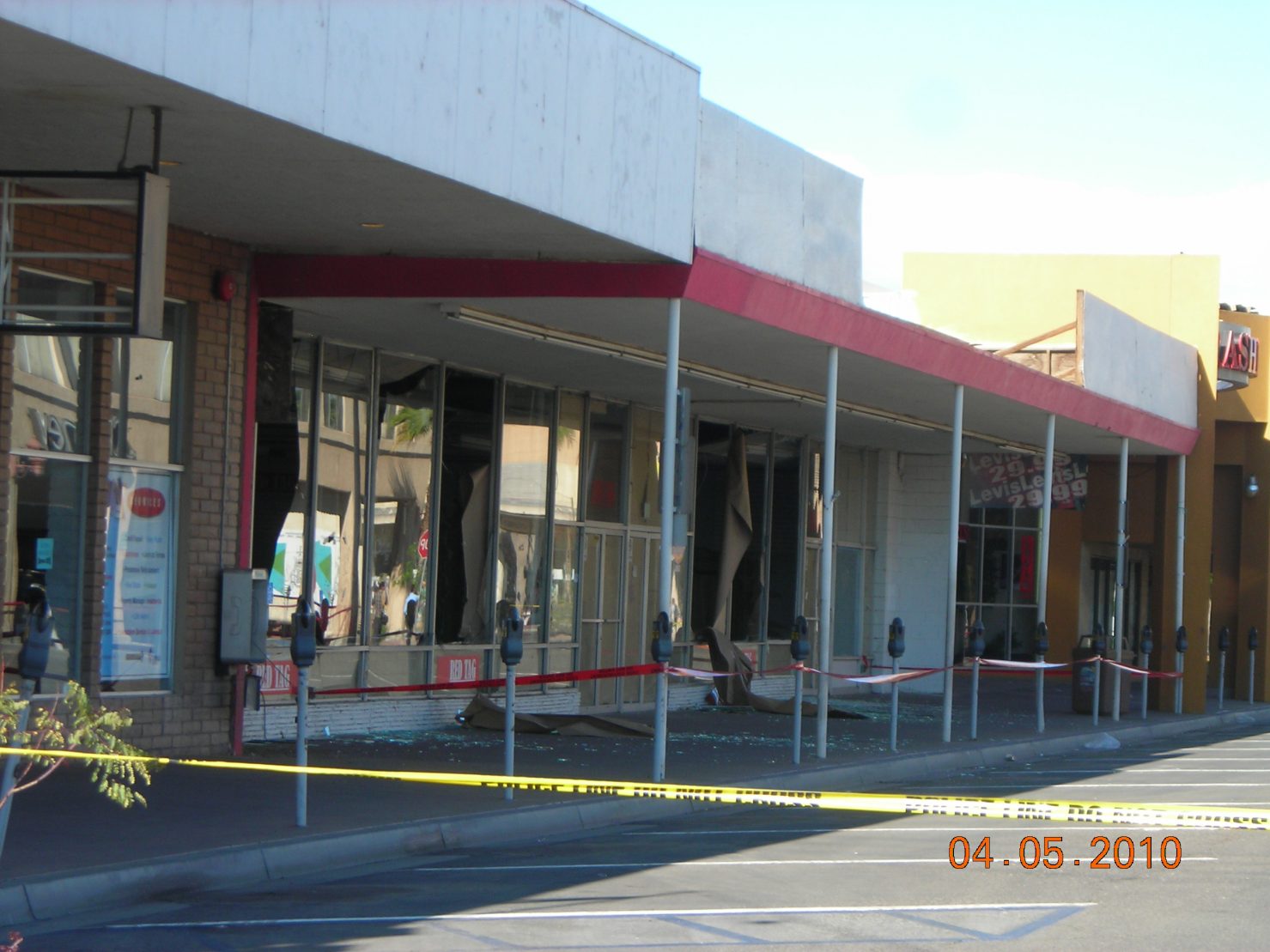 A shot of some of the damage to Calexico after the April 4, 2010 magnitude-7.2 earthquake. | Photo Courtesy of City of Calexico
Home
Featured Stories
In Featured StoriesRegional News

IMPERIAL VALLEY — Remember that horror movie where the protagonist is scared to death and can’t move?

Ten years ago, that was Calexico resident Morris Reisen and his nephew, both of whom felt that same terror where they could barely stand as they heard the rumbling and felt the ground moving beneath them.

As if on a boat, shifting back and forth, they slowly managed to run outside of the building they were in April 4, 2010, onto the street to safety.

On a sunny Easter Sunday afternoon, a magnitude-7.2 earthquake centered southeast of Mexicali at Cerro Prieto, rolled through the region, laying waste to buildings and critical infrastructure like water treatment facilities, roads, public buildings and private homes through Imperial County and the Mexicali Valley.

As Imperial County residents contend with a new potential disaster with the ongoing COVID-19 pandemic, several public officials remembered where they were and what they were doing when the historic earthquake rattled nerves and changed lives 10 years ago.

While no loss of life was recorded from the quake in Imperial County, the temblor did a number on cities throughout the Imperial Valley.

Reisen, a merchant in downtown Calexico for many years, had never experienced such a catastrophe. Once the initial earthquake stopped, he said he headed down to his store and witnessed glass breaking everywhere and ceiling tiles falling.

Still shocked by the damage to his store, Sports International, the retired merchant and current Calexico City Council member, received a call from the city that the Police Department was at his house due to a broken gas pipe that was whistling.

The neighborhood block was evacuated, and fortunately no one was injured.

After securing his home, Reisen went back to the store. He was devastated to see the damage to downtown Calexico.

“The city ordered fences to block the streets and we (merchants) weren’t allowed to go into stores for a couple of days until inspectors saw the damage and were given the OK to reopen,” Reisen said during a recent interview.

Security guards and traffic control officers were present to ensure looting was not taking place. The merchants also banded together, cruising around downtown, protecting their livelihood.

Former Calexico City Council member Victor Carrillo remembers barbecuing in his own backyard with friends and family, and everyone making eye contact frantically. He said people were grabbing their babies, some were taking the elderly outside or to a safe location, some huddled under a doorway or table riding out what seemed to be a never-ending quake.

As a city official — Carrillo was mayor at the time — after determining his family and house were safe, Carrillo excused himself and went to the emergency command center at the Calexico Fire Department where designated representatives from cities, counties, fire department, and other officials met as part of the emergency protocol. Thereafter, different teams were dispersed to assess damage.

“There was a lot of structural damage, but of utmost important was our seniors who were evacuated from the De Anza Hotel in Calexico,” Reisen remembered. “We needed to relocate them temporarily because the building was unsafe for occupancy. Some had family and some didn’t. Some hotels such as Holiday Inn Express and John Jay helped us.”

Calexico had the most damage due to its unreinforced masonry buildings constructed in the 1930s to 1950s, which are now required to meet updated safety codes, stated John Moreno, who was mayor pro-tem at the time.

Serious damages occurred to infrastructure all over the county.

Drew Road off Interstate 8 had substantial damage and was closed for months due to the road being ripped apart and left with a gaping hole.

As indicated in the U.S. Geological Survey’s report, “Liquefaction and Other Ground Failures in Imperial County, California, from the April 4, 2010, El Mayor-Cucapah Earthquake,” there appeared to be liquefaction-related damage to several public facilities such as the Calexico Wastewater Treatment Plant, Fig Lagoon levee system and Sunbeam Lake Dam in particular.

As the city of El Centro assessed its damage, officials in the county seat found the biggest concern was for the number of residents in mobile home parks where their homes had literally shifted off the foundation and could no longer be occupied, said Cheryl Walker, mayor of El Centro at the time and still a member of City Council.

“The city (El Centro) took an active role to help residents qualify for assistance through FEMA or some other safety net. But the biggest challenge was the mobile properties — the homeowners did not have clear title and could not get a conventional loan for repairs. The biggest struggle was to fix the foundations and re-shelter everyone as quickly as possible,” Walker said recently.

Another issue was some apartment complexes had parking underneath, and the parking structures were damaged and could not be occupied, Walker remembered.

Due to irreparable structural damage, the El Centro Public Library was unable to be saved. Although it had a fairly modern addition, portions of the building were more than a half a century old at the time of the quake.

The library was relocated to a temporary space off Imperial Avenue.

“We received very little FEMA assistance — extraordinarily disappointing as a lot of damage to the library was disallowed. The whole process was frustrating and didn’t even come anywhere close to recovering the costs. That’s why it took a while to reopen,” Walker said.

“We had to wait for Measure P (a voter-approved half-cent sales tax) for funding. A new library will be built with its opening during the latter part of 2021 at about $20 million through Measure P sales tax revenue,” Walker explained recently.

She added the old water tower on Eighth Street Avenue and Vine Street in El Centro was an iconic structure that had to be razed.

“It was hard, it was (an iconic) symbol,” Walker said.

Another iconic building that saw its demise due to the earthquake was the old Presbyterian Church, Walker said.

“It was absolutely beautiful. And it was with a heavy heart when Christ Community (Church, which purchased the building) said there was no way they could save the building,” she said.

The main campus of El Centro Regional Medical Center had some damage but not enough to interrupt patient care. However, the medical office building adjacent to the main campus was damaged and had to be torn down and replaced.

“The water and wastewater facilities were damaged, but emergency repairs were done and reinforcement and some components pieces needed to be repaired. By and large we came through and continued with little downtime,” Walker said.

Coming Together to Assist

Although Imperial Valley had extensive damage, fortunately no serious injuries were immediately reported.

With a disaster of this magnitude, it was critical all parties come together on next steps, officials said.

“When a disaster hits, people come together, and Calexico was no exception. Through donations and other assistance, the community came together,” Carrillo said. In addition, the Calexico Chamber of Commerce encouraged residents to buy locally.

Carrillo gives credit to local, state and federal first responders — most under direction of then-Imperial County Fire Chief Peter Mercado — “it was a total team effort.”

FEMA did come out and did surveys and meetings, but the financial support took a long time, Carrillo said.

Carrillo said the city was “very grateful for those merchants who rebuilt and moved on. Community should recognize this and provide support to them as a sign of gratitude. The general funds (of the city) rely on sales tax along with property tax.”

U.S. Sen. Barbara Boxer, California Gov. Arnold Schwarzenegger, Congressman Juan Vargas and Assemblyman V. Manuel Perez were just a few of the notable local, state, and federal officials who came to see the damage and to give a message of hope to provide funding and support.

Geologists and geophysicists who studied the April 2010 quake for scientific discoveries called the quake a “very unique one.”

“Everything about this earthquake was new and different,” said Dr. Kenneth Hudnut, a geophysicist at the U.S. Geological Survey’s Earthquake Science Center in Pasadena in a 2015 interview.

He was among the principal investigators in analyzing the quake and publishing studies in its aftermath. He said discoveries made in the Easter quake helped scientists develop models and refine the state of California’s early-warning quake system, which is in use on a limited basis today.

“This earthquake opened our eyes to earthquake behavior we have not seen before,” he said.  The report also credits the quake for unlocking several secrets and proving numerous theories about what major earthquakes are capable of and how they behave.

A quake of such magnitude also brought being prepared a bit closer to home. “First, everyone should be prepared to last a minimum of three to five days at home without having to go out and purchase anything (food, water, meds, pet food, etc.), to shelter in place without any support from anyone; second, assume you will have no power (have flashlights, radio, alternative ways to cook); and third, have an emergency contact person outside the Valley to contact,” Walker said.