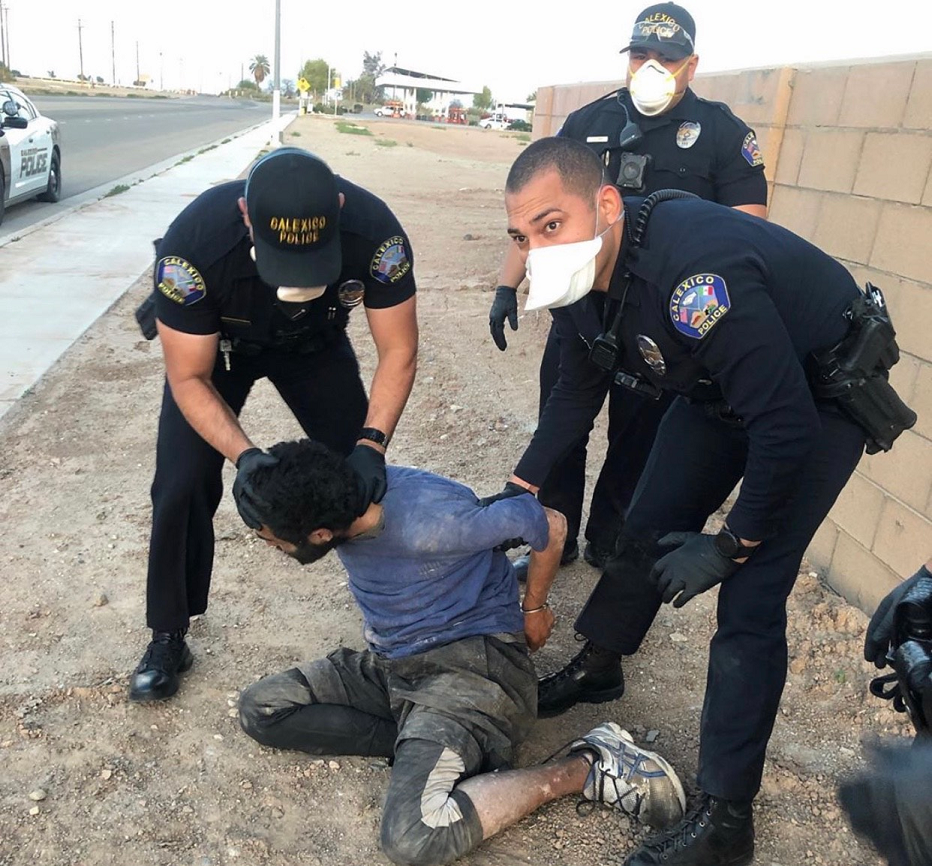 Calexico police officers don masks and gloves while recently arresting a suspect accused of stealing a jogger’s cell phone in the city. Masks and gloves have been pretty much standard attire for law enforcement agencies around the Valley since the COVID-19 pandemic became a local concern. | PHOTO COURTESY OF CALEXICO POA
Home
COVID-19
In COVID-19Regional News

IMPERIAL COUNTY — Nearing nearly three full weeks of mandatory stay-at-home orders and forced business closures, life as we know it has not only changed for Imperial County residents but for those sworn to protect and serve them.

Since Gov. Gavin Newsom ordered the closure of all nonessential businesses in the state, mandated that residents practice keeping clear of each another and avoid large gatherings for the foreseeable future in the face of escalating cases of COVID-19, local police agencies have arguably seen their “mission” change in a very short period of time.

In less than a month, some 600 people have been tested for coronavirus in Imperial County, and while well over 500 have come back negative, the numbers for those infected with COVID has grown in a short amount of time, with 75 total cases confirmed — 55 of which are active — and three deaths, as of April 8.

But even the idea of “mission change” has changed in the eyes of government officials from one week to the next.

County Executive Officer Tony Rouhotas Jr. said during a press conference April 2, the same day the first COVID-related death in the county was reported, that law enforcement’s “mission” to the public had changed.

But in the ensuing days, Rouhotas, Sheriff Ray Loera, and police chiefs in Calexico and El Centro, walked back the idea of “mission change;” instead, acknowledging that their present sets of tasks have been modified moving forward.

For certain, though, those in local law enforcement leadership positions say day-to-day functions have been altered, and job No. 1 is maintaining “workforce readiness” through keeping their own ranks safe from the spread of coronavirus.

“I think that our main mission is not changing, we’re changing the way we are addressing some of these issues … prioritizing some issues more in line with public health issues,” Loera said April 3. “The main priority is to limit our deputies’ contact with people so that we can maintain a force that will be available at all times.”

“We’re taking reports on the phone, minimizing public contact,” Gerardo said April 3. “I’m making sure my guys get plenty of rest. Stress and lack of sleep bring our immune system down. Right now, we’re at full deployment … I’m trying to get them two days off a week, so they don’t burn out.”

Calexico’s police officers all have the full cadre of personal protective equipment, what law enforcement and medical officials have been referring to as “PPEs”: “We have goggles, masks, gloves, hand sanitizers, Clorox wipes,” Gerardo said.

Calexico Fire Chief Diego Favila made sure the Police Department has three 55-gallon drums of a bleach solution to disinfect their patrol cars each day.

“We still need to protect and serve, but we are implementing our own social distancing, ensuring my workforce is available internally,” Johnson said April 3. “We have to provide service 24-7.”

As an example of how some of this separation affects crime enforcement, Loera said in cases of “petty theft, where there are no suspects and no chance of arrest,” his department is content with online reporting and taking reports over the phone.

Changes to the way the public is living and behaving has affected the types of calls and reports police and deputies deal with daily.

In Calexico, for instance, a town that depends on the vibrant border economy from Mexicali, Gerardo said ensuring that nonessential businesses close and remain closed is important, and enforcing social distancing in a city that still sees an influx of migrant farmworkers milling in the downtown despite a federal travel advisory is also key.

During the day Calexico’s downtown is comparatively empty, as most of the businesses there and along large areas of Imperial Avenue are closed for being nonessential, meaning they do not provide necessities or services the public requires to survive.

That is compounded by the loss of daily visitors to Calexico from casual shoppers from Mexicali.

However, farmworkers who participate in the harvest in Imperial County are considered essential workers and have been cleared to come across the border. They tend to congregate in the downtown between 3 and 5 a.m. weekdays and around 4 to 6 p.m. weeknights.

“They’re essential. Since we’re a border community, (people) think we’re not following the quarantine,” Gerardo said. “When (the farmworkers) are getting off work and cashing their checks, we tell them they can’t hang around, that they have to leave.”

Johnson said his department continues to field complaints about price-gouging from businesses and people not practicing social distancing while in line at essential businesses like grocery stores and banks.

During a recent conversation with this newspaper, Johnson said he had gotten a text from someone in the public saying people in line at a local bank we’re standing too close to each other. He said he sent out a couple of officers to educate the public.

Same with price-gouging. His officers have looked into a half-dozen complaints, but nothing has been found to merit an actual citation. The law does allow a markup of 10 percent even in times of crisis.

Gerardo said he has asked businesses to produce their delivery receipts to make sure they are pricing their products in line with what they are purchasing them for.

Perhaps not surprisingly, some calls Gerardo has seen increase in recent weeks are those for domestic disturbances and child-custody disputes.

“People are getting on each other’s nerves,” Gerardo said.

He said there are homes where both parents work and the children are at school or in school-related activities, yet they are now all together in a single spot, and tempers flare and nerves get frayed.

“We come out and try to keep the peace,” he said.

In child-custody situations, parents with primary custody don’t want to give up their children to leave the home and go with the other parent. The chief said, “We won’t demand they turn them over right now.”

What About People Out and About?

Some departments do give a certain amount of latitude in terms of running people out of parks or off the streets.

For example, El Centro parks remain open as long as social distancing is in place.

“Nobody can be cooped up in the house 24-7, but be responsible,” Johnson said.

He added that people need exercise and if they do so in a responsible manner, they don’t need to be near each other.

In Calexico, where the city has closed its parks completely, there is more of a hard-lined stance. “If we see more people out, we’re going to take more enforcement action. If we see them out, we tell them to go home,” Gerardo said. “We know it’s going to get worse before it gets better. … If I could be staying at home, I would be with my family.”