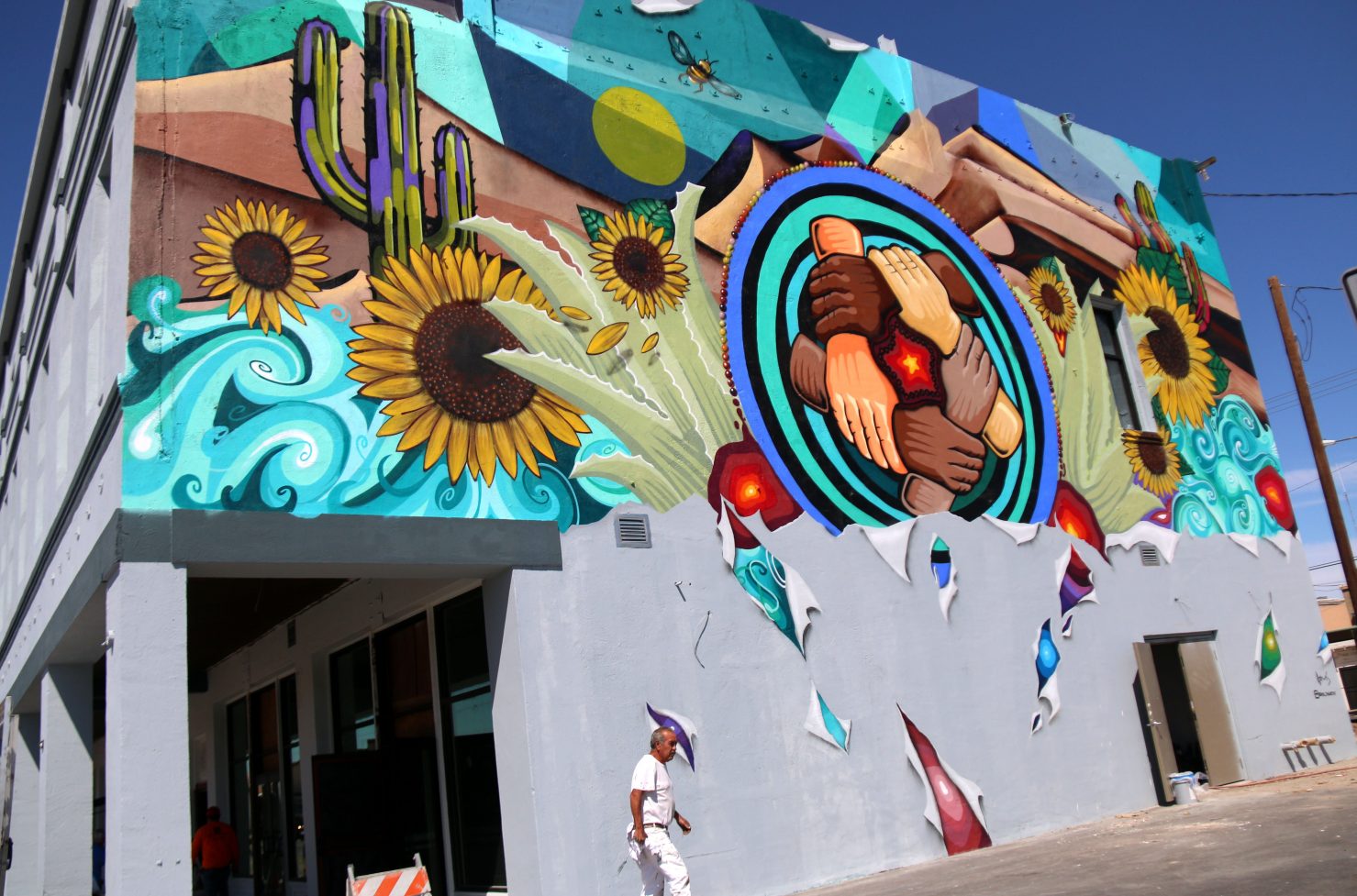 A beautiful new mural stands on the east wall of the former Masonic Temple on State Street in El Centro, where the building is being rehabilitated and renovated for the new location of La Resaca seafood restaurant on April 6. | WILLIAM ROLLER PHOTO
Home
Business
In BusinessRegional News

EL CENTRO — NUMA Inc., doing business as La Resaca Mexican seafood restaurant and The Loft event center at 201 N. Imperial Ave. in El Centro, is being readied to move into the downtown part of the city as the company transforms the former Masonic Temple on State Street.

The project has been two years in the making, including roots in a 2019 decision by the El Centro City Council to unanimously approve the company’s application for a revolving loan fund (RLF) loan, explained Adriana Nava, director of the El Centro Community Services Department.

NUMA Inc. operates several more restaurants in Calexico and Yuma, but its main vehicle is the restaurant and event center on Imperial Avenue. NUMA is owned by David and Diana Nuricumbo and has been in business seven years.

The Nuricumbos put up $401,286 of their own funds. But they still needed a way to close the gap of the entire project cost. Diana said she found out the city receives funding to assist commercial growth to local businesses that will create or retain jobs.

“When we first started looking into the possibility of expanding our business, we met with staff from the Imperial Valley Small Business Development Center and worked with them to develop our business plan and procure our funding,” she said.

It was the SBDC that introduced the Nuricumbos to the RLF program and recommended workshops at the San Diego SBDC to find other sources of funding. Yet securing funding for the project was quite difficult, Diana recalled. It took two years to locate a lender that was willing to invest such a large sum in this project.

The low-interest RLF loan from the city is backed by the U.S. Economic Development Administration, which provides grants to state and local governments to assist businesses that cannot get traditional bank financing. The city’s aim is to use the federal support to achieve business development and beautification in blighted areas like downtown El Centro, where the Masonic Temple is located, Nava explained.

The Nuricumbos path to secure private lending is where the story had its twists and turns.

“We first applied with a local smaller bank who required that the business invest at least 20 percent of the total project cost from the business proceeds, known as having skin in the game,” Diana said.

Yet because the Nuricumbos were dealing with a smaller bank, there was a limit to the amount of financing the bank would commit to. That is why David and Diana also applied for the city’s RLF loan in March 2019.

Between the local bank’s loan and the city loan and their own 20 percent investment, they had enough to cover the project costs.

But ultimately, the small bank’s loan committee decided the project was too large for what they were comfortable lending and backed out.

“We then went to large banks to fund this project, but one we went to didn’t feel comfortable investing in the Imperial Valley due to its economic assessment of the area, and the other wasn’t willing to invest in downtown because of so many vacant buildings in the area,” Diana said.

But when all seemed lost for the project, Diana encountered a broker she was introduced to through the San Diego SBDC and she and David were directed to Clearinghouse CDFI, which specialized in underdeveloped communities and Diana and David were told that their project was a perfect fit for Clearinghouse.

“So, from the beginning Clearinghouse was told that we had already invested 20 percent in this project from our own business proceeds,” Diana said. “And also, because we applied for the city’s RLF loan, Clearinghouse felt comfortable that the city was willing to contribute to this project.”

The city-backed loan was enough to meet Clearinghouse’s loan requirements, so the deal could move forward, Diana indicated.

As a provision of the RLF approval from the city, La Resaca must create one job per $35,000 of loan underwriting, or in this case three jobs. But the Nuricumbos said they intend to create 12 full-time jobs and approximately 20 part-time jobs.

Those kinds of job-creation numbers struck a chord with Clearinghouse, so it agreed to back La Resaca with a $1.79 million loan.

“We’ve been in the restaurant business 16 years and have degrees in business management and run three other successful restaurants,” Diana said. “We’ve planned this project for many years now, and we’ve had the assistance of financial advisors for our sales projections. We truly believe we will succeed.” The Nuricumbos have said they expect to be open in the old Masonic Temple site in May. It was not immediately known how the current COVID-19 closures would affect that timeline.

Next
Health Expert Cautions PPEs No Substitute for Coronavirus Guidelines