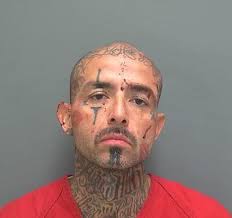 A Holtville man found guilty of six felony charges in connection with an assault on an Imperial County sheriff’s deputy was sentenced to what amounts to 69 years-to-life in prison inside an El Centro courtroom April 9.

Third-striker Alex Padilla, 39, who was convicted of six of eight felonies in the Nov. 28, 2018, assault of Deputy Miguel Calderon, was sentenced by Judge Marco Nuñez to the harshest penalty allowable by law on one of the six concurrent sentences, the prosecutor indicated.

Padilla will not be able to go before a parole board for a least 69 years, Imperial County Deputy District Attorney Twyla Johnson said during a follow-up interview April 11.

Nuñez imposed a sentence of 39 years-to-life on the conviction for assault on a peace officer with a semi-automatic firearm with a 20-year enhancement of personal discharge of a firearm and two five-year enhancements for Padilla’s prior two felony strikes, for the total of 69 to life.

The sentencing was stayed on the five other counts, meaning the sentences imposed by Nuñez, were less than the allowable maximum.

Before the judge rendered his sentence, Padilla’s deputy public defender, Ben Warren, argued against some of the enhancements and sought a sentence of 35 years to life.

“The court has discretion,” Johnson reminded Nuñez on April 9. “I don’t think it makes sense not to add (the) enhancement. This is exactly the type of third strike the term provided for. And since 2005, Padilla has not gone four months without breaking the law.”

Nuñez informed the court Padilla committed a serious and violent crime, and he has a history of serious and violent behavior. His first felony conviction in 2002 was for assault with a deadly weapon and a second in 2011 was for first-degree burglary.

“His extreme callousness and cruelty led him to use two deadly weapons (Calderon’s firearm and a knife Padilla had), and he showed no remorse (at sentencing),” Nuñez said.

In addition to the peace officer assault with a semi-automatic firearm count, Padilla was convicted Jan. 28 of assault on a peace officer with a deadly weapon (a knife) with an enhancement of causing great bodily injury; criminal threats; resisting an executive officer with an enhancement of great bodily injury, and guilty of being a felon in possession of a firearm.

He was found not guilty of attempted murder on a peace officer and the unlawful taking of a police vehicle.

Warren attempted to object to the count of possession of a firearm by a felon because Padilla merely snatched up Calderon’s firearm when he dropped it, claiming Padilla did it in an attempt to escape further questions by Calderon.

“It wouldn’t serve justice to waive the gun possession,” countered Nuñez. “He retrieved the officer’s firearm and with a knife, he slashed him and then fired at the officer, stole his vehicle, then tried to hide among church congregants (Iglesia Bethel in Holtville) and once subdued, after being placed in the back of a law enforcement unit, fled, all in an attempt to evade apprehension.

“I can’t in good conscience dismiss the enhancement and must ask for the greatest maximum sentence,” Nuñez said.

Adding to the viciousness of Padilla’s acts, Johnson pointed out that Calderon was recently medically retired from the Sheriff’s Office because of the injuries he sustained from Padilla’s attack.

The defendant, defense attorney and deputy district attorney appeared by video remote from the Imperial County jail in order to maintain social-distancing guidelines because of the coronavirus outbreak.

Previous
COVID Cases Surge Past the Century Mark, to 127; Concentrate in Density Centers