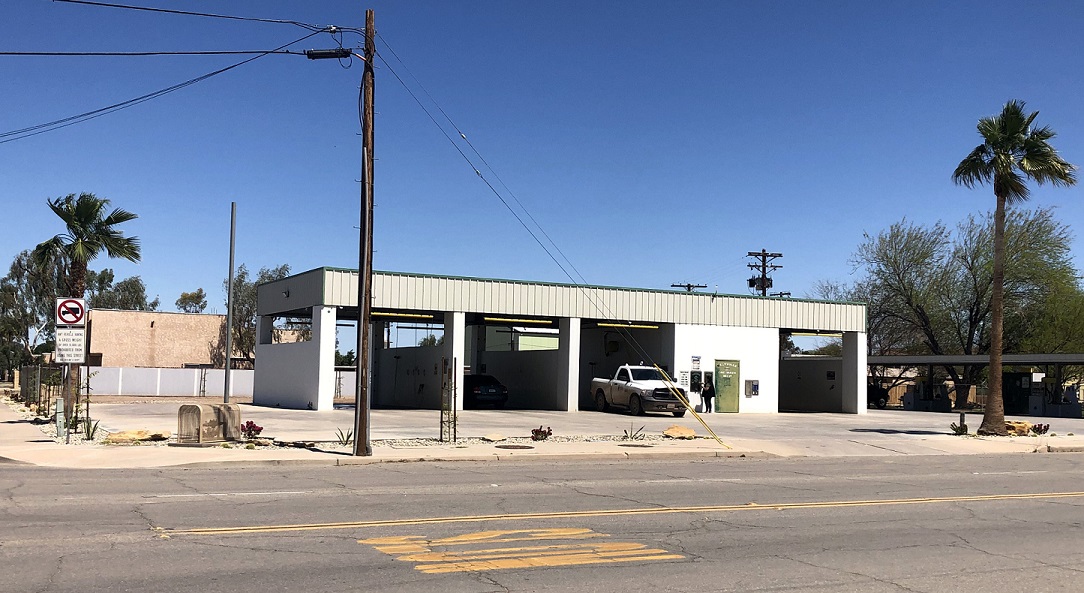 The Holtville Car Wash at 735 E. Fifth St. in Holtville is now owned by Shayne Brady and consists of four wash bays to keep your cars and trucks clean. | PHOTO COURTESY OF SHAYNE BRADY
Home
Local News
In Local News

HOLTVILLE — A car-washing service did not appear on the horizon when Shayne Brady was growing up helping with his father, Tom Brady, with his custom row-crop service, but today he operates the car wash in Holtville along with two other businesses.

While it is the only car wash in Holtville, Brady noted he still seeks to make the operation top notch. He bought out the former owner of Holtville Car Wash in December 2018 and immediately set to making improvements. It is a self-serve operation but Brady said he made sure the quality of the wash received a noticeable leap in raising the standard of a clean car.

“All four bays have the spot-free air shammy,” Brady said of a long-existing process that he has now introduced. “It incorporates soft water and reverse osmosis so it won’t spot your car. But customers must do a thorough job to get all the water off.”

An air shammy is an in-bay, touchless vehicle dryer. It dries vehicles and motorcycles spot-free and drying is an important part of self-serve vehicle maintenance.

Tom arrived in Holtville from Oklahoma in the 1930s, then served in the military during World War II and was even part of the occupation force on Okinawa. Returning to Holtville he started farming lettuce and alfalfa in 1952 but left it in 1976 for his custom row-crop operation. Shayne attended and graduated from Cal Poly Pomona in 1986 with a Bachelor of Science degree in Agriculture Management and rejoined his father’s business.

The family sold the row-crop service in 1999 to Nutrient Ag Solutions, which is still running the business today. Tom and Shayne then started the Storage Depot at 622 E. Fifth Street in Holtville.

“It’s a self-storage with a storage facility. It’s all one big block,” said Brady. “I bought out my mother and father about eight years ago. Then I started Desert Sun Towing in 2012.”

The towing business has two tow trucks but it is essentially a 24/7 operation with on-call drivers who stay connected by smart phones, Brady said.

“It’s been good,” he added. “I mainly have agreements with the California Highway Patrol, Imperial County Sheriff’s Office and the U.S. Customs and Border Protection. There’s not a lot of resident calls, but a little bit.”

As for the Holtville Car Wash, the property has been completely re-landscaped, new equipment installed, including token boxes, but customers can use quarters if they prefer.

“We’re getting set up to accept credit or debit cards,” said Brady. “There still is some processes to complete with the credit card companies, as well as the card readers. Then we’ll have to shut down the car wash for about two weeks to be refitted to accommodate credit transactions. It is more intense than I expected.”

With the extra effort, Brady is confident Holtville residents will come to appreciate his initiative.

“We’ve really been supported at the car wash and the other businesses by the people of Holtville,” he said. “It’s a small town and we care about anything that may go wrong.”

Brady acknowledged there are a number of moving parts with the car wash and things can wear down. Yet should anything need repairing he asks customers to contact him at the Storage Depot.

“We’ll hurry over and get you into another bay,” said Brady. “The residents here appreciate having a good car wash and not having to drive to El Centro and we value them for their loyalty.”

Similar to many small businesses, Brady said he has been affected by the coronavirus pandemic. He has noticed less traffic on the streets the past month and people appear to be sheltering in.

“The Storage Depot is nearly full,” he confided. “But Desert Sun Towing and the car wash have slowed down a little. But we appreciate all of what the good people of Holtville have done for us.”

Next
Baja California Officials Begin Screening Southbound Travelers for COVID, Causing Foot Traffic to Back Up in Calexico