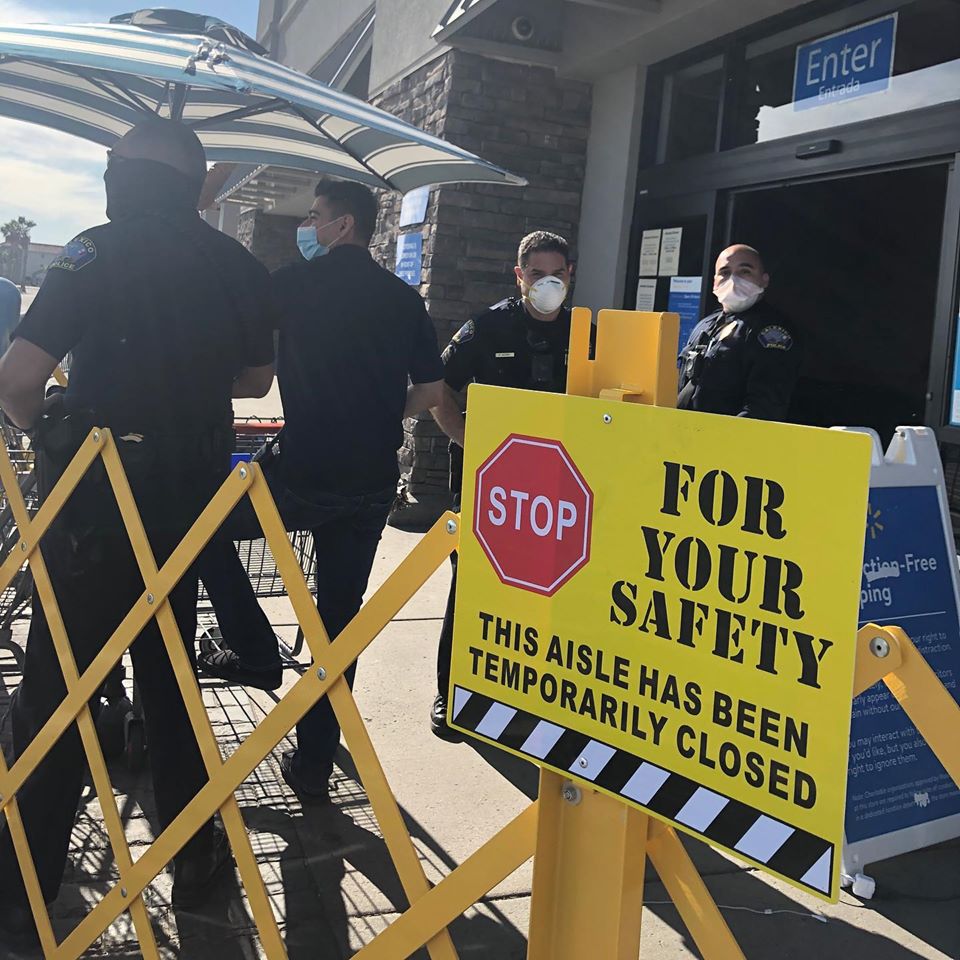 IMPERIAL COUNTY — Calexico continues to get its fair share of complaints about large groups of people defying health orders to cover up their faces — the implication being the groups are Mexican essential workers — but so far none of the claims have been substantiated, the police chief said recently.

Patrolling downtown Calexico in his police cruiser the afternoon of April 17, Chief Gonzalo Gerardo spoke to a reporter on speaker phone about the false reports coming into his department that farmworkers and others are not adhering to the county health officer’s April 10 order requiring members of the public to wear face coverings at all times to limit the spread of coronavirus.

“I’m downtown right now and everybody’s covered up,” Gerardo said, describing how he passed a bus stop where a pair of men sat on a bench, one wearing a covering over his mouth and nose, the other with a mask around his chin as he drank from a water bottle.

“You go anywhere, you’re going to find people without face coverings,” Gerardo said. There is a perception that it’s rampant “only in Calexico” due to the number of essential workers from Mexico present in the city daily to work in farm labor and other jobs, he said.

Recently, someone forwarded a complaint to the chief that a group of 50 people were gathered at Donut Avenue last week in downtown Calexico and none of them were wearing face coverings. But Gerardo said his overnight/morning sergeant followed up and checked on the business, saying that the men and women waiting to go out into the fields to work were almost all covered up.

Likewise, when they returned from the fields and gathered to cash their checks at local money-exchange businesses, police found most were covered up then, too, Gerardo said.

A few days after Dr. Stephen Munday issued his order, Gerardo said calls started coming into the department from people in businesses reporting groups uncovered inside local businesses like Walmart and Food4Less. Again, he said, officers checked out the reports and found them to be unfounded.

On April 12, members of the Calexico Police Officers Association posted photos to the association Facebook and Instagram pages showing them responding to the unfounded reports at Walmart.

Gerardo said since April 10, police have only issued one citation to someone not wearing a face covering, and that was a ticket added to an arrest made of a man attempting to steal a motorcycle.

Although Munday’s health order specifically stated violations of the covering requirement are punishable by up to a $1,000 fine or 90 days in jail, Munday acknowledged during a press conference April 12 that members of the public were expected to do the right thing and that enforcement would likely be educational in nature. That is exactly what is bearing out at this point.

“We’re mostly in education mode and issuing reminders. That’s not to say we won’t enforce,” Gerardo said, but police are still focused on education.

It is the same for El Centro Police Chief Brian Johnson, whose officers are tracking the complaints but almost entirely engaged in education efforts.

“We’ve been very proactive wanting to get that message out on the order for a face cover,” Johnson said April 17.

He said officers responded to some 35 calls for service regarding face coverings through April 16, only issuing one “written warning citation” that final day after police issued a verbal warning to an individual in the morning, and then gave the same person a written warning in the afternoon when it became clear he was purposefully not wearing the covering in the presence of police.

Johnson said on April 17 command staff went to banks and supermarkets in El Centro to issue “final warnings” to those businesses about their responsibilities to ensure customers inside those facilities were wearing face coverings and practicing social distancing.

After a few complaints came in over the weekend about an excess of visitors to El Centro’s Bucklin Park who were not wearing facial coverings, Johnson said that officers did go out and tell families and others using the park April 18 and 19 to cover up. He said it appeared most if not all were practicing social distancing.

Johnson explained enforcement on some of these calls is being handled tactfully, as people grow frustrated with being confined to their homes.

He added that El Centro has not received any complaints in two to three weeks of businesses price-gouging, reports that have never been substantiated either.

“It appears everyone is complying,” he said.

Gerardo in Calexico and Imperial County Sheriff Ray Loera also are not getting price-gouging reports any longer. They are also not getting many reports of people not practicing social distancing or nonessential businesses trying to reopen.

“I do believe that most people are taking this seriously. They are following the news, following the warnings, people are conscious of the directions they are being asked to take,” Loera said April 17.

California did take a lot of heat with such early stern measures, Loera said, “but kudos to Gov. Gavin Newsom,” who instituted the mandatory orders just over four weeks ago.

“I think California jumped on it … I’m personally very glad the Governor took these steps, and it looks like it has had a positive effect,” Loera said, referring to the lower-than-predicted number of COVID infections and deaths in the state.

“The beauty is we’re resilient as a community,” Johnson added. “Everybody is doing their part to end this pandemic.”

Police on Lookout for New Scam

Meanwhile, a new wrinkle in the myriad of coronavirus-related enforcement issues occurring in Calexico and across Imperial County is a “potential insurance scam” going door-to-door among multiple cities’ senior populations, Gerardo said.

A group dressed from head to toe in personal protective equipment are claiming to represent a doctor from Indio who is offering COVID testing.

El Centro Police Department and the county, through the Sheriff’s Office and the Area Agency on Aging, both released advisories warning of the potential scam April 17.

Gerardo provided cellphone photos police took of the suspected criminal activity, and he personally witnessed the “potential fraud” case in action in Calexico on April 16.

“I drove down Third Street and saw five people dressed in space suits (PPE) who said they were working for a doctor out of Indio and El Centro near a seniors’ complex,” Gerardo said.

“If people are coming to your door, do not give them any information,” Gerardo said. The only way to get tested is through a doctor by a visit to a healthcare facility or by a telehealth video appointment.

“No one is coming to your house to seek you out,” Gerardo added.

The scam is thought to be some form of insurance fraud or identity theft.

In an April 17 press release from the county, Area Agency on Aging representative Karla Flores said the fraudulent testing had occurred over the past three weeks. In each case, individuals claiming to work in the medical field have gone to senior apartments, offered testing, and requested personal information, according to the county advisory.

“I can tell you that those who have been tested were told they would get their results in three days, but none have received a response,” Flores stated in the release.

County officials said those offering the fraudulent testing may be asked for personal information, including but not limited to, Social Security numbers, medical insurance information, driver license numbers, birth dates and addresses.

The Agency Area of Aging is urging all seniors to contact Flores at 760-604-9772 if they have concerns about fraudulent medical services. Concerned residents can also contact the sheriff’s office dispatch at 442-265-2021 or local police departments.