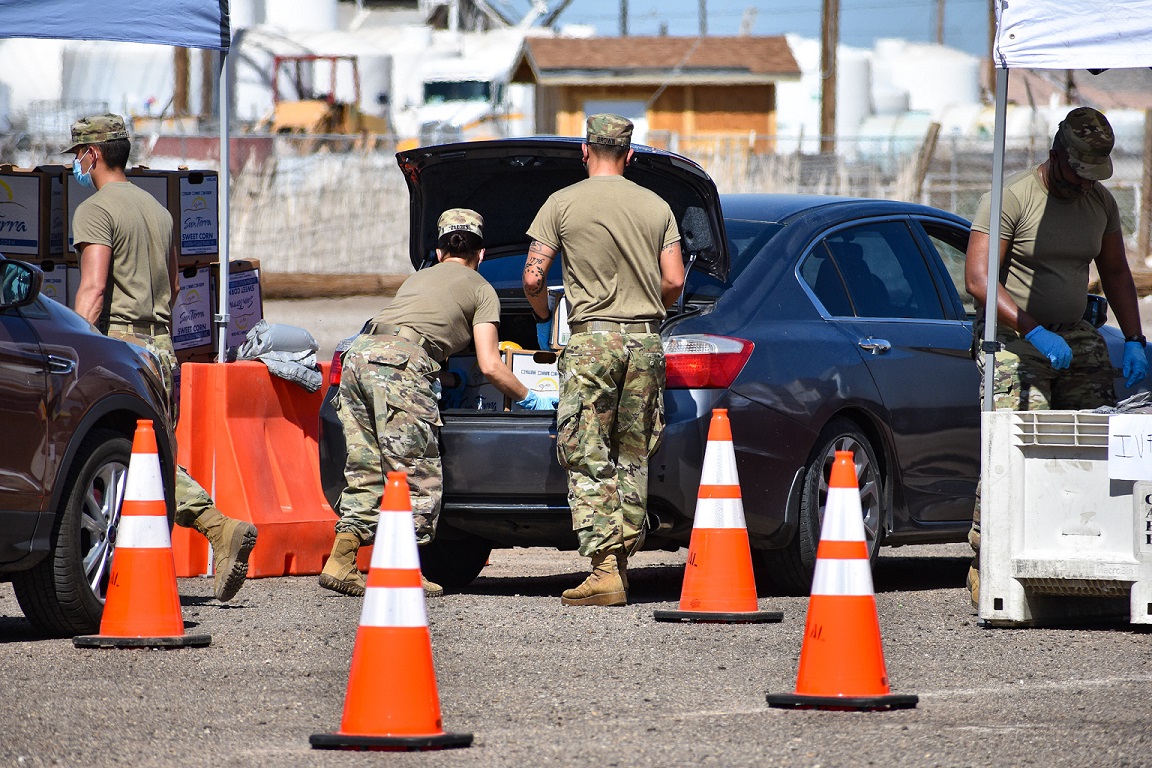 The Imperial Valley Food Bank feeds numerous families and individuals during a food pantry distribution in the Kennedy Gardens area in Calexico on April 28. Since layoffs and businesses closures due to social distancing, more and more people are in need of food from the I.V. Food Bank. | COURTESY PHOTOS
Home
COVID-19
In COVID-19Regional News

IMPERIAL — In yet another record-setting month, volunteers and Imperial Valley Food Bank staff fed some 356 local families and handed out about 20,000 pounds of food on April 27 during the bank’s one-a-month Valley-wide distribution in Imperial.

Due to the overwhelming response seen at last month’s distribution (332 families served), food bank officials moved the distribution point from its new headquarters on Aten Road in Imperial, to the more spacious I.V. Fairgrounds parking lot, also in Imperial, said Stefanie Campos, marketing and communications manager for the nonprofit agency.

“The number of people calling us for food has greatly increased. We saw a 12 percent surge in just the second half of March, and we expect a larger surge in April,” food bank Executive Director Sara Griffen told the El Centro City Council on April 24, referring to Valley-wide numbers.

For the entire month of April, through individual appointments, the bank served a total of more 650 families (including the 356 from April 27) from its Aten Road location, Campos said during an April 28 interview.

That is over and above the individual distributions the food bank does on its own in specific Valley communities and with partnering agencies during the month.

For example, in Calexico, Campos said the food bank handed out fresh and frozen food and canned goods to 480 individuals and 164 families at Kennedy Gardens park on April 28.

Consistently, the food bank had been assisting 80 to 100 families before the pandemic hit, “then it increased exponentially since COVID,” Campos said, due to people losing their jobs amid mandatory business closures.

Campos encourages people to call the food bank at 760-370-0966 to find out when the distributions in their neighborhoods are scheduled, or to schedule emergency daily pickups at the Aten location. Also, those calling can find out how to sign up for CalFresh (food stamps) and other programs.

Griffen encouraged people to sign up for CalFresh during her presentation to the El Centro council April 24.

“All the food banks and all the food pantries in the United States together only provide 5 percent of food assistance. The other 95 comes from programs like CalFresh, and we want our friends and neighbors to be able to shop for their families in local grocery stores and help our local economy recover from the economic effects of COVID,” she said.

Total of families served at food bank headquarters in Imperial for month of April.

Pounds of dry, frozen and canned goods handed out April 27.

Average pounds per family of food handed out April 27.

Number of volunteers needed to distribute food April 27 (39 does not include city of Imperial Public Works staff and police officers doing traffic and crowd control).

Next
Local, State Officials Have No Timeline to Reopen Businesses