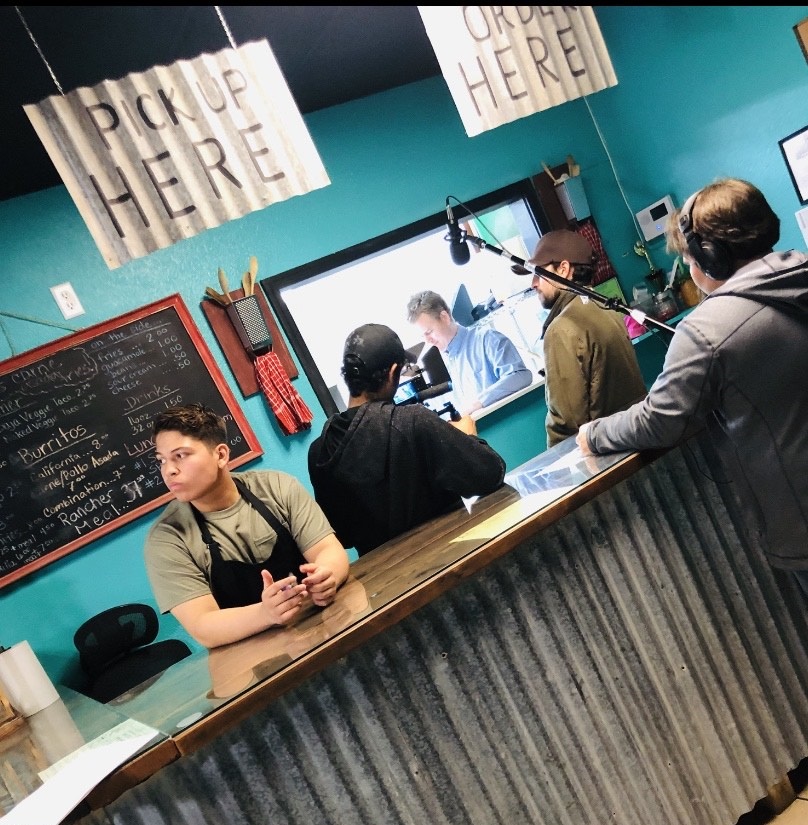 Jacob Valenzuela of Holtville (from left) is shown filing a scene in "A Faraway Stare," a film by director Roy Dorantes. Valenzuela, who is 18, plays a waiter in the film. | COURTESY PHOTO
Home
Featured Stories
In Featured StoriesLocal News

HOLTVILLE — Struggling to get by as a Holtville High School sophomore, Jacob Valenzuela’s love of the silver screen lead to a life-altering discovery while surfing the Internet when he found the K-12 Insight web-page.

Valenzuela, now 18, admitted he could not focus in a traditional classroom setting and barely managed a 2.0 grade-appoint average until he stumbled across Insight two years ago and found learning need not be a burden.

“I wasn’t doing well in school and falling behind, and when I saw Insight, I decided to do home schooling because I needed a different environment,” said Valenzuela. “They sent me a Chromebook and some textbooks. I access their website online and go live every morning with a different teacher. I now have a 3.1 GPA.”

Valenzuela focuses on English, calculus and an Advanced Placement world-history classes. He logs in at 9 a.m. and logs off at noon, or logs in at 2 p.m. and off at 5 p.m. The schedule varies but not Valenzuela’s attention span as he is now riveted to his studies.

“Honestly, I feel more focused—not so distracted,” he said. “We have quizzes every day, then midterm and a final exam. I’m in my final quarter, and I’ll get an accredited homeschool diploma.”

Valenzuela will graduate with about 500 seniors who completed Insight’s online curriculum on June 17 in an Anaheim venue to be announced.

Through a combination of cloud-based technology and professional development, Insight’s online school-based solutions were created to give students the tools they need to advance. From their Virginia headquarters, a team of teachers and technologists promote dedication to learning so to improve communities and student outcomes, explains Insight’s webpage. Insight has done this work in districts, large and small, reaching more than 4 million students, the online program reports.

Since age 13, Valenzuela has cultivated a passion for movies and acting, citing Jim Carrey, star of the comedy/action movie hit “Ace Ventura: Pet Detective,” and as one of his favorite actors, and his favorite movie as “Central Intelligence” starring Kevin Hart and Dwayne Johnson.

Although he never participated in a school drama club, Valenzuela has had some roles in film shorts such as “Miles Per Hour,” a movie directed by Ryan Joseph Perez of Niland about a waiter whose intensity is focused on race-car driving and leaves him on edge to hit the oval track.

“It was released on YouTube in 2019,” recalled Valenzuela. “Ryan wanted to enter it in the Imperial Valley Film Festival, but it was too much money because he was involved with other films. But I was in another, “The Tussle,” about a group of guys who hang out at a bar and get involved in fights. It was one of my favorites because the actors all hung out and learned from each other.”

Valenzuela also cultivated a love for stand-up comedians. One of his idols is Gabriel Iglesias. “He’s on Netflix with ‘I’m not Fat … I’m Fluffy’ and he’s got a TV show, ‘The Fluffy World Tour.’ I’m just a fan, but I tried to contact him when I was younger.”

Once he graduates high school, Valenzuela will head for his sister Jennifer’s residence in San Diego.

“I lived with her when I was attending the Acting Professionally (a San Diego-based acting school),” said Valenzuela. “My whole family will spend the summer.”

Acting Professionally provides professional-level acting classes for adults and children. It offers comprehensive training to build the skills needed to succeed, including on-camera audition skills, cold-reading skills as well as industry showcases live and online to maximize exposure to the industry locally and in Los Angeles.

Another movie short Valenzuela played a role in was “Faraway Stare,” written, produced and directed by Roy Dorantes, who has run his own company, RD Media Productions, while working as a local television news reporter.

“The movie is about drug addiction and a warning to young people to not get involved,” said Valenzuela. “I play the part of a waiter. I really liked it. But it was an eye-opener and a warning because drugs will ruin your life.”

Dorantes praised Valenzuela for really coming across on screen as being totally into his character.

“We wanted Jacob to play a strong teenage character,” said Dorantes. “And he participated way beyond the set. He helped promote the movie on his own. I think a person like that is a director’s wish.”

Making the Most of Networking

Valenzuela plans to connect with an actor/model friend of his in Los Angeles, Ayden Mekus, who had the lead role in “The Lilac Thief.”

“He’s living in L.A. with his parents, and he’ll help me get auditions,” said Valenzuela.

Two people Valenzuela will always have in his corner are his parents. His mother, Savanah, wrote in an email that they as parents always encouraged him to pursue his acting.

He started his own YouTube channel writing short stories and acting them out with the support of his younger cousins. She noted, Jacob has a lot of talent and potential to succeed one day.

“In ‘Miles Per Hour’ he did a wonderful performance,” Savanah wrote. “‘Faraway Stare’ is about drug addiction and the aftermath and impact it has in our youth. As parents, we are extremely proud of all his performances in the short films he’s done. We are very thankful to Ryan Joseph Perez and to Roy Dorantes for the opportunity they gave Jacob.”

She also pointed out, Jacob has a strong determination about being an actor.

“We encourage him and praise him daily,” she added. “We tell him to never give up and not let anyone crush his dreams or his spirit and to believe in himself always. We told him to remember he will never stand alone because his parents and his siblings believe in him always, far away or near, and he is very much loved.”