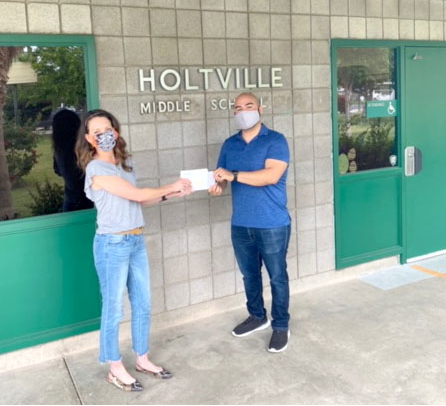 HOLTVILLE — Seeing its mission as helping the most vulnerable among the community, Supporting Holtville in Numerous Endeavors, or SHiNe, for short, makes a heartfelt commitment to serve the broadest base possible, according to members of the nonprofit group.

Sara Enz, a co-public administrator for Imperial County’s Area Agency on Aging, was one of the founding members of SHiNE. The organization previously had been a local chapter of Soroptimist International, whose aim was to help women, children and families with monetary and non-monetary assistance.

But several years ago, members desired to broaden their scope to include male youths and formed an independent organization.

During this time of global pandemic, SHiNE members are seeking to assist the community, especially those suffering job losses due to nonessential business closures and other circumstances related to coronavirus.

“We wanted to support the citizens in Holtville as well as the county. I think SHiNE already had the Area Agency on Aging in mind,” Enz said. “We wanted to help them support the older adult population with all the resources they provide, especially during the COVID-19 pandemic. But I also recommended the Imperial Valley Food Bank.”

Sara Griffen, executive director of the food bank, explained the nonprofit has been hit hard with a 12-percent surge in food requests in March.

“Most of our food comes from the (U.S. Department of Agriculture), but we also receive a lot of donations from local farmers,” she said.

During 2019, the food bank provided 5 million pounds of food and in March, fed 26,000 people in Imperial County. When informed of SHiNE’s donation of $200 worth of gift cards from local Holtville merchants, Griffen was most appreciative.

“We are a nonprofit, so we rely on the generosity of our neighbors,” she said. “We are happy to take whatever we can acquire. And a lot of that recent surge in requests for food is tied to the stay-a-home order and the related closure of dining-in restaurants and other businesses required to close.”

Providing Gift That Has Its Own Rewards

Katie Turner, SHiNE secretary, noted the nonprofit’s most recent efforts set aside $3,600 worth of gift-card purchases from Holtville merchants. These included George’s Pizza, The Taco Shop, Los Cerritos restaurant and the Family Dollar Store retailer. The merchants were pleased with the purchases, of course.

“The Holtville community has been gracious with SHiNE by supporting our fund-raising efforts, so this was a way to give back to our community, to families in need and a way to help local businesses in difficult times, because of the coronavirus and the stay-at-home order,” Turner said.

It was always SHiNE’s purpose, even when still a chapter with the Soroptimists, to give back to its neighbors, and in particular, women and families.

“The reason we (SHiNE) went independent was because we want to give any local organizations who were in need without following a more narrowly defined outreach. The schools, they donated the gift cards to include Finley and Pine elementary schools, Holtville Middle School and Holtville High School.” Turner noted nonprofit had a substantial sum in its general fund but having an idle deep-pocketed bank account does not serve much purpose.

“We wanted to turn it around and see the funds go to families and the community,” Turner said. “I feel very grateful and blessed to be a part of it.”

“I think what motivates me is SHiNE’s vision, to help many other peoples’ ventures,” she said. “We help the Boys & Girls Club of Imperial Valley and a lot of the athletic teams of Holtville schools.”

Often, SHiNE will receive a letter from a school basketball, baseball or football team explaining their need for sports equipment. And the nonprofit maintains a budget for items such as that. They also provide college scholarships. Seven students received awards in 2019.

Each fall during the middle of football season, SHiNE holds its fund-raising extravaganza with its annual Football Margarita Night that is held outdoors on the campus of Vessey & Co.’s office. SHiNE sells dinner tickets, raffle tickets as well as holds a silent auction to support SHiNE’s many community projects. “During the current crisis, we’re helping others through tough times, especially those who lost jobs,” said Brady. “We all want to do our part. And the margarita night, we get to watch football outdoors together and it’s great fun.”