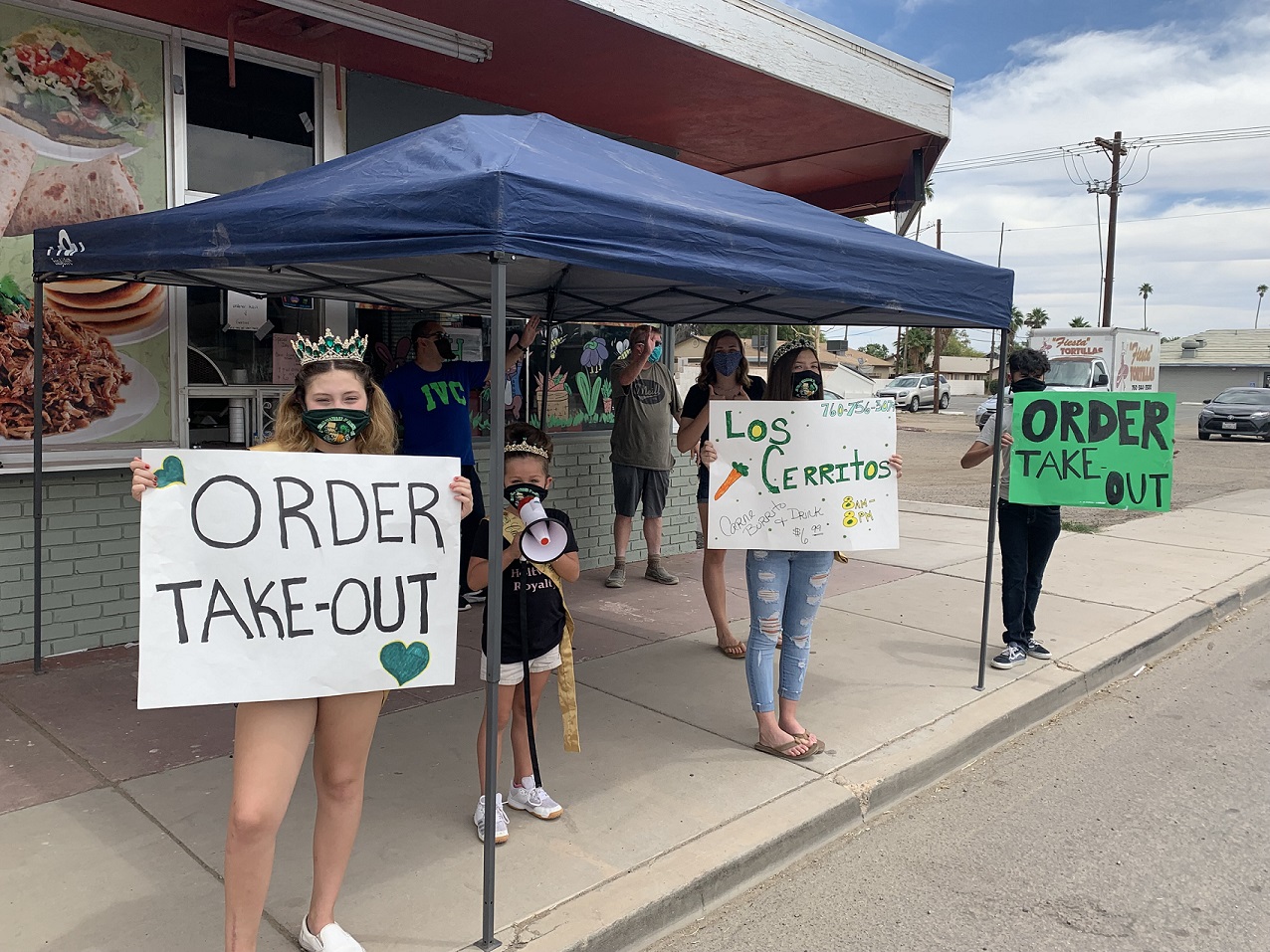 Members of the Carrot Festival royal court and Holtville Chamber of Commerce rally outside Los Cerritos Restaurant in the city last week as part of an ongoing Holtville chamber campaign to get residents to support local eateries through takeout orders. | COURTESY PHOTO
Home
Featured Stories
In Featured StoriesLocal News

HOLTVILLE — After six weeks of sheltering in place and nonessential businesses closed amid the pandemic, the Holtville Chamber of Commerce called on the Carrot Queen and her court to encourage locals to loosen up their purse strings.

For the “restaurant rally” on recent days the group literally took to the streets. Helping cheer on customers were the 2020 Carrot Festival Queen Alexis Piper and her court, Lexi Roeseler, princess, and Brytni Valenzuela, junior princess.

Although the smallest court member, Brytni made up for her stature with a booming voice made louder after chamber manager Rosie Allegranza gave her a bullhorn. That nabbed the attention of passersby along Fifth Street with a carnival barker’s blare urging everyone to support the Holtville eateries.

“We’re rallying the (Imperial) Valley’s residents to support local restaurants,” Allegranza said. “The intent is support our local restaurants by ordering take out. Tuesday we featured the Taco Shop, Wednesday it was George’s Pizza, Thursday was Los Cerritos and Friday was Donut Avenue. George’s is offering 20 percent off to first responders, healthcare workers, law enforcement and military personnel.”

Jerry Cerros, owner of Los Cerritos, said his business did extremely well when the Chamber of Commerce and the royalty court visited.

“Sales were definitely up,” said Cerros. “We thank the royalty court and the community for supporting our restaurant.”

Open only since January 2019, Cerros went into business with his wife, Adriana. Although there are a number of Mexican restaurants in town, Los Cerritos tries bringing something different, such as barbacoa with cheese on a corn tortilla.

Blanca McClure, owner of George’s Pizza, explained despite the pandemic business has been pretty good and there is a lot of support from the entire Imperial Valley. Although she recommended phoning in a pizza order to help keep social distancing, she reminded customers of red lines tapped to the floor so everybody knows to stand six feet apart.

“Having all the kids at home now, what they want is pizza,” McClure explained. “Customers have been really good about social distancing. If it starts to get crowded, some wait in their cars. But if there’s someone in need in Holtville with underlying health issues, we’ll deliver a pizza.”

For the royalty court, the activity was a change of pace during what should have been a time busy with school and appearances at now-cancelled events.

Alexis admitted online classes are a little harder for her. She also misses her feeder calf, Boomer, that she keeps in the barn at school. Boomer earned a yellow ribbon for showmanship at the California Mid-Winter Fair & Fiesta in March.

“I miss my friends, but we go on walks while social distancing and do a lot of FaceTime on iPhones,” said Alexis. “And I play soccer with my 6-year-old brother, Dillon.”

Brytni said, “I miss my best friend, Chelsea, from school.”

While some restaurants, such as Wong’s Kitchen, Las Palmitas and D’Lupitas, opted to close rather than just serve take-out, Allegranza said once dine-in service is allowed again the chamber will assist with a grand re-opening.