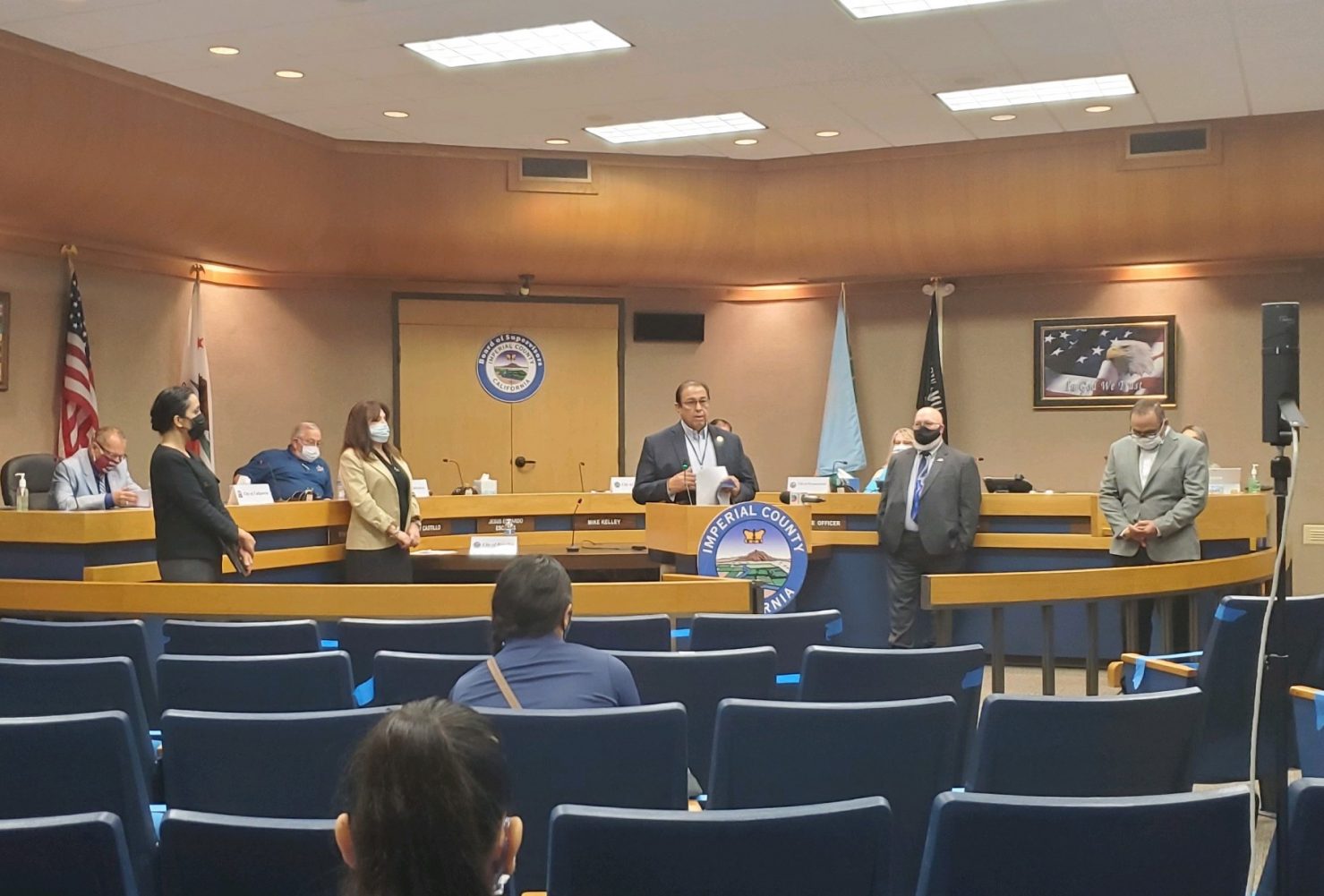 Imperial County Board of Supervisors Chairman Luis Plancarte (center) speaks to the media while being flanked by mayors and council members from all seven Imperial County cities, and county Public Health Department officials, during a joint press conference May 8 further explaining Gov. Gavin Newsom's "roadmap" to re-opening California amid the COVID pandemic. | JAYSON BARNISKE PHOTO
Home
COVID-19
In COVID-19Regional News

IMPERIAL COUNTY — With the exception of a host of formerly nonessential businesses being re-opened to the public for curbside pickup, little has changed in establishing a finite timeline to the re-opening of churches, dine-in restaurants, barbershops, nail salons, or many of the types of businesses and situations people have been debating over this past week.

All these businesses and organizations are considered “higher risk” and the county must reach certain virus-related medical criteria before any timelines will be established, officials said May 8.

There were few, if any, resolutions that came during the May 8 joint press conference between Imperial County and elected officials from the Valley’s seven cities. What was announced reiterated Gov. Gavin Newsom’s undefined timeline to resuming life in California on May 7.

“This plan outlines what we can do to open up those businesses that are higher risk. These businesses need to demonstrate a low prevalence of risk and high level of readiness,” said Luis Plancarte, chairperson of the Imperial County Board of Supervisors.

He then introduced county Public Health Department Director Janette Angulo, who went over the “regional variance criteria” set forth by the governor, or simply, the path needed to get businesses and institutions back open again amidst escalating COVID-19 cases in Imperial County.

“Regional variance criteria” was the term used for many of the public health bars that need to be reached before any hard timelines can be placed on opening up more “risky” ventures.

Meanwhile, in what is arguably the bigger development, Imperial County Public Health Officer, Dr. Stephen Munday, issued a modified public health order May 9, that eased up on some restrictions, but doubled down on others, such as keeping stay-at-home orders in place, the ongoing requirement that nonessential businesses remain closed “with exceptions,” that people continue wearing face-coverings at all times in public and the requirement to continue physical distancing, among other tenets of the order.

“The amended order reiterates the stay-at-home requirements for all residents in Imperial County but expands the list of exceptions to include activities now deemed permissible by the California Department of Public Health and the State Public Health Officer Order. Under the amended state and local health officer orders, in addition to being able to leave their homes to conduct essential tasks (e.g., grocery shopping, medication pick-up, reporting to essential employment), residents may now engage in curbside retail from lower-risk businesses. This includes, but is not limited to, clothing stores, music stores, bookstores, and florists. The requirement for face coverings in public and social distancing remains in effect,” according to the county’s May 9 press release.

“Under the amended order, non-essential businesses shall remain closed with the exception of those businesses permitted to open under the State’s Resilience Roadmap and Imperial County’s Roadmap to Recovery. Under both roadmaps, additional sectors, businesses, or activities will progressively be allowed to reopen with certain modifications once set parameters are met. The Imperial County’s Roadmap to Recovery is found on the Public Health Department’s website,” the county press release stated.

The amended order went into effect at 5 p.m. May 9.

The Hard (Soft) Numbers Announced May 8

Public Health Director Angulo explained during the conference that there are six “regional variance criteria” laid out by the state that must be met before moving forward and easing state and local public health restrictions in corresponding stages.

The county is now at Stage 2 for “lower risk workplaces,” according to Public Health Department information. Stage 2-4 is defined on the county’s website at http://www.icphd.org/roadmap-to-recovery

“The criteria we have to follow as put forth by the governor to move into Phase 2 are epidemiolocal security, protecting essential workers, minimum daily testing capacity of 1.5 per 1,000 residents, testing 15 percent of the homeless population, (ensuring) our hospitals are able to operate at a surge (increase in beds) of 35 percent and 15 contract tracers (those who track exposure to COVID from person to person) per 100,000 residents,” Angulo said.

Angulo recognized that if there were a second wave of the virus, county officials would revert to earlier stages in the four-stage plan if needed.

Gov. Newsom’s regional variance criteria keyed in on several points, some Imperial County is close to attaining and some that, due to the continued spread of COVID-19 in the community, the county is far from achieving.

For example, the state mandated there be no more than one “new case” of COVID per 10,000 in the last 14 days. Under these guidelines the Imperial County would be required to have fewer than 18 new cases for two weeks based on an estimated 180,000 population, Angulo confirmed.

This number of importance here is not the number of active cases as seen on the Imperial County Health Department’s website. Rather, it is the number of new cases.

Although there were 262 active cases on May 8, there were 56 “new cases” according to the “cases overview” pie chart on the dashboard.

Numbers of positive cases in the Imperial County are expected to rise as the Governor’s criteria requires increased testing numbers. The plan requires a minimum daily test of 1.5 per 1,000 residents to move deeper into Stage 2. In Imperial County that would mean the minimum number of tests administered has to be about 273 per day, Angulo said.

Imperial County is not far from that number with the Public Health Department’s testing and the mobile testing from the state that begin at the I.V. Fairgrounds last week. Both of those combined already have increased the testing capacity to about 230 per day, not to mention testing being done by hospitals and private healthcare providers, Munday has confirmed during a prior press conference.

“That metric criteria, we’re working hard toward meeting,” Angulo said May 8. On follow-up questioning, however, Angulo said the county is under 200 a day in testing.

“Right now, we are under 200 tests a day,” she said when pressed by a Calexico Chronicle reporter. It wasn’t immediately clear why Angulo’s numbers are off from Munday’s prior estimates.

The same can be said for contact tracing. Newsom is requiring 15 contact tracers per 100,000 residents. The Imperial County would need 27 contract tracers to move further into Stage 2 of the plan, according to projections.

Imperial County Public Health’s epidemiology staff has cross-trained numerous county employees to take on the job, as many as 20 people as of May 8.

Angulo said county public health officials have been working hard to disseminate information about that state’s roadmap to recovery.

“We have a dedicated staff making the roadmap template available online. It’s not my roadmap, it’s everyone’s roadmap.”

The live interactive document will answer users’ questions and take their feedback. Residents can refer to this document on the Imperial County’s website, she said.

Church services and gatherings remain closed, although faith-based institutions and organizations can provide food, mental health guidance and essential services to its parishioners and the public, as long as social distancing is enforced and face coverings are worn.

Stage 3 will be — once the “regional variance criteria” is met — where retail stores, dine-in establishments, personal care and services establishments, church services and select other businesses and situations can be allowed to re-open with limitations and certain health order rules still in place.

Stage 4 will be marked by the end of stay-at-home orders and the re-opening of the “highest-risk environments and venues once therapeutics (medicines and vaccines) have been developed,” according to Public Health’s description.

What Led to May 8 Meeting?

Imperial County and city officials were forced into an emergency meeting of the minds, arguably, by a decision April 29 by the city of El Centro to adopt a document to open nonessential businesses and allow certain kinds of gatherings on a sped-up timeline.

Approved by the El Centro City Council in closed session 4-0 and presented to the public at its May 1 weekly COVID update meeting on Facebook Live, the plan immediately drew the ire of county and other city officials. It also drew lots of support, from some cities and from a lot of the general public, including faith-based leaders in Imperial County and small business advocates.

El Centro’s plan would have restored almost all access (with strict physical-distancing protocols) to dining-in establishments, churches, barbershops and hair and nail salons, and even El Centro’s water park, on May 11 despite warnings from county Public Health officials that the timeline was too soon.

A business community hurting from the economic effects of the closures and restrictions, and a public feeling the fatigue of stay-at-home orders, likely emboldened the city to act first and consult with the county and other cities second.

Clearly, El Centro officials thought they had the legal standing to move forward with their plan — their city attorney and other city officials said as much on the record. But county health-permitting officials and state-licensing boards held the trump cards to the operation of things like dine-in restaurants, hair and nail salons, and barbers and tattooists.

More from May 8 Press Conference

Following Angulo’s presentation, which clarified many questions that were lingering up until that point, each city spoke on the issue of re-opening and emphasizing a positive approach to working together in the county toward a return to normalcy.

Some were blunter than others, though. There were lots of platitudes and pronouncements of unity, and then there was Calexico Mayor Bill Hodge.

“In my opinion, we shouldn’t go any further. Why are we opening businesses when we have not met the metric to do so? If you have an increased number of people getting sick and are opening, it is counterproductive.”

Tying politics and healthcare on the macro and micro levels, Hodge took some swipes at the White House in attempting to bring the issue home.

“The problem with the Trump administration is everybody’s doing their own thing. I teach history, and historically, it has been proven that when we have a crisis like this it is better to have the government manage the situation,” he said.

“This is the time for a concerted effort by the federal government. That is how we got through World War II, the Great Depression, and the Marshall Plan,” Hodge said.

Hodge could be felt trying to equate Trump and his hot-and-cold deference to the U.S. Centers for Disease Control, to local policymakers and their challenges of the Governor’s and health officer Munday’s local health orders to keep private enterprise at bay during this pandemic.

Where Do We Go from Here?

When asked about a timeframe to return to the new normal, Supervisor Plancarte said, “This is a fluid plan the county makes today. The governor may change the plan by Monday. Please be flexible with us.

“A month ago, there were people who couldn’t sleep at night. Now, we are getting better. If we take all these preventative measures, we will get there sooner,” Plancarte continued.

“I don’t know if pressure from local business owners and churches to re-open will continue. I can tell there has been clear signs showing that congregating with large numbers of people heightens exposure and increases the rate of transfer of COVID-19,” he said.