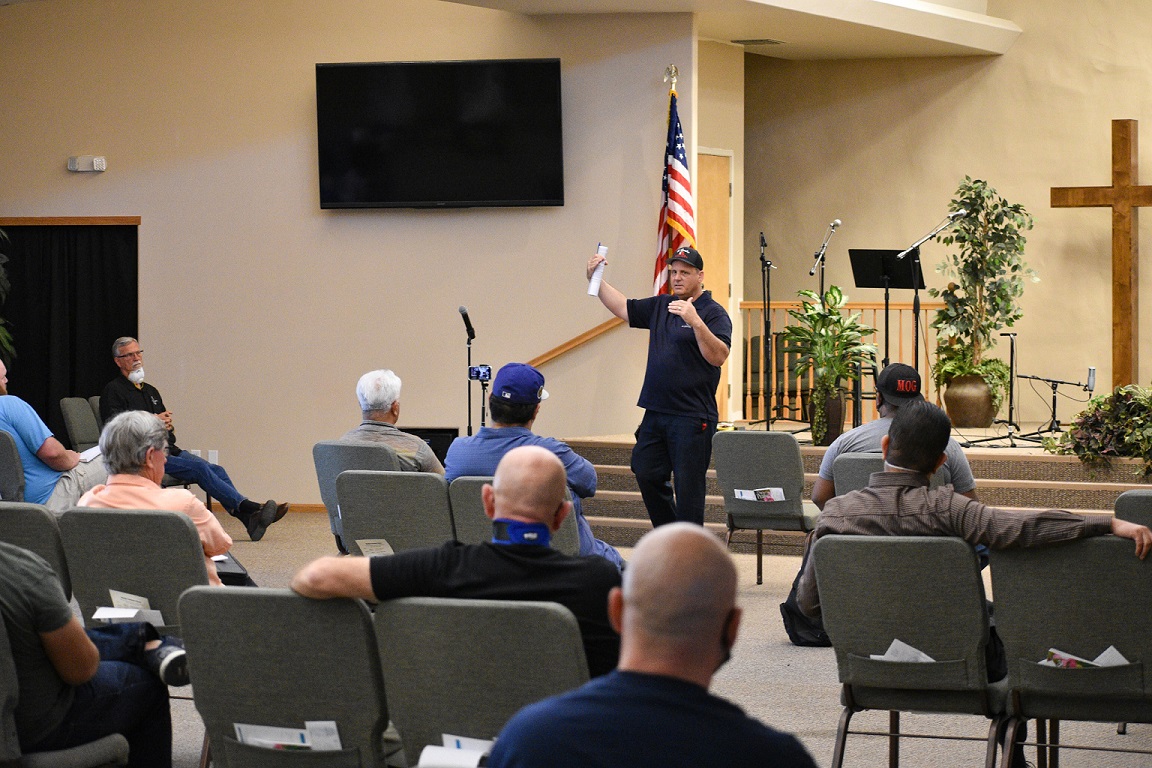 El Centro Fire Chief Ken Herbert speaks to a roomful of Imperial Valley religious leaders who met inside Calvary Chapel in El Centro on May 6 to discuss social distancing requirements during church services when the various local pastors thought they might re-open their churches to Sunday services. Faith-based institutions have since learned that no timelines have been set to resume Sunday services until certain COVID-related medical bars are reached. | CORISSA IBARRA PHOTO
Home
COVID-19
In COVID-19Featured StoriesRegional News

IMPERIAL COUNTY — Local religious leaders were disenchanted after the Imperial County’s joint press conference last week when they learned the state’s health metrics associated with COVID-19 infection would not allow churches to open for Sunday services and mass gatherings any time soon.

“Churches are essential when it comes to meeting peoples emotional, spiritual and physical needs. It seems unreasonable to have churches classified in phase 3,” said Faith Assembly Lead Pastor Dan Bruce, who feels religious centers offer a type of inner guidance and peace that cannot be derived from government.

“Depression, hopelessness, anxiety, alcoholism, drug addiction and domestic violence are on the rise. This is our wheelhouse. I would like to see our county ask the state to put churches in phase 2,” Bruce said during a May 12 interview.

The Imperial-area pastor is referring to the phases of the state’s “Roadmap to Recovery,” a timeline and description of stages in which local businesses, faith-based institutions and others will be allowed to resume life in California.

Imperial County Public Health Department officials clarified during a May 8 press conference that due to “regional variance criteria” placed on localities by the state, various medical thresholds to show there is containment of the spread of coronavirus in their respective communities must be met before churches can open again for services and mass gathering events.

Imperial County is now in phase 2 of the road map, and churches can now provide services like food-pantry distributions and certain mental-health counseling to its flock with strict guidelines such as physical distancing in place. However, traditional Sunday services and other events in which groups of more than 10 gather have been pushed off to an undetermined third phase of the plan.

“For me, it feels reasonable to put churches in phase 2 and I am disappointed with that assessment. I feel we can apply by the same rules as Costco and Wal-Mart. We (churches) can meet all the criteria that all the other phase 2 businesses abide by,” Bruce said, who ministers out of the Imperial area.

“I think all the churches were disappointed that we were put in phase 3. We thought churches would be put in phase 2,” said Walter Colace, pastor at Christ Community Church in El Centro during a May 12 interview.

Colace leads one of the largest church congregations in the Valley, with more than 700 members and their children in attendance on an average Sunday morning.

“It is what it is, is the motto we are following at our church. All we can do is take things one week at a time and we hope to know more by next week,” Colace said, who like many religious leaders in the Imperial Valley will continue to spread the Gospel through online services via the Internet.

Meanwhile, Bruce said he realizes the path to re-opening his churches’ door is unclear at the present with the escalating number of new cases of COVID-19 in the county.

“Phase 3 seems months away. To move into phase 3, we will need less than 18 new cases over a two-week span. We are far away from that number right now,” the pastor said.

There were 38 new cases on the Imperial County’s COVID-19 Surveillance Dashboard on May 13.

Religious leaders had high hopes for re-opening after meeting with El Centro city officials on May 6 at Calvary Chapel in El Centro.

Calvary Pastor Pete Mallinger explained he set up the meeting at his church to give local religious leaders a chance to ask questions and express their concerns to city officials, who on that day had already established May 11 as the date in which churches could fully re-open in the city with strict adherence to physical distancing.

Exactly a week earlier, the El Centro council had voted in closed session to adopt its own re-opening plan, with dates, that would end up contradicting the state’s guidelines and the county’s public health order. The city plan has been rendered moot at this point.

By May 6, however, El Centro officials already knew their timeline was in question, as they were in closed-door talks with the county and were awaiting guidance from the state, which would come the next day.

On May 6, about 50 church leaders were in attendance for the meeting. Doors were left open and seats were placed seven feet apart. Overflow rooms were made available in case the crowd grew beyond the church’s social-distancing capacity.

“We wanted to show officials that if we were allowed to open, we could maintain the social-distancing order. We went an extra step by placing a space seven feet between chairs instead of the minimum requirement of six feet,” Mallinger said.

Pastor Pansak “Ekkie” Tepsupornchai of Western Avenue Baptist in Brawley made a plea to officials that rallied those in attendance.

“Please do not categorize us with sporting events and concerts. We answer to a higher authority. Everyone who comes to church knows each other. Sporting events and concerts are held for financial and entertainment purposes. Churches gathers for a spiritual purpose and some find it offensive that churches are grouped with the types of events in phase 3,” Tepsupornchai said.

“Our churches are a point of conversation and it really depends on whose plan you are looking at whether they should fall into phase 1, 2, 3 or 4. What the plan is today could be completely different than what it was yesterday,” council member Jackson said.

When an unidentified member of the crowd asked if how church operations would be regulated by the city, Police Chief Johnson answered, “If we wanted to clamp down and be a police state, we could not. We do not have the resources.”

“People must follow the guidelines, or we will have spikes (in COVID-19 cases) and have to bring back restrictions,” Johnson said.

During the meeting, Pastor Colace acknowledged how his church community had evolved during the pandemic and encouraged other religious leaders to search for the silver lining.

“What we need to do is not so much look at what is, but focus on what we can be, and I am seeing a lot of strength in the community right now,” Colace said.