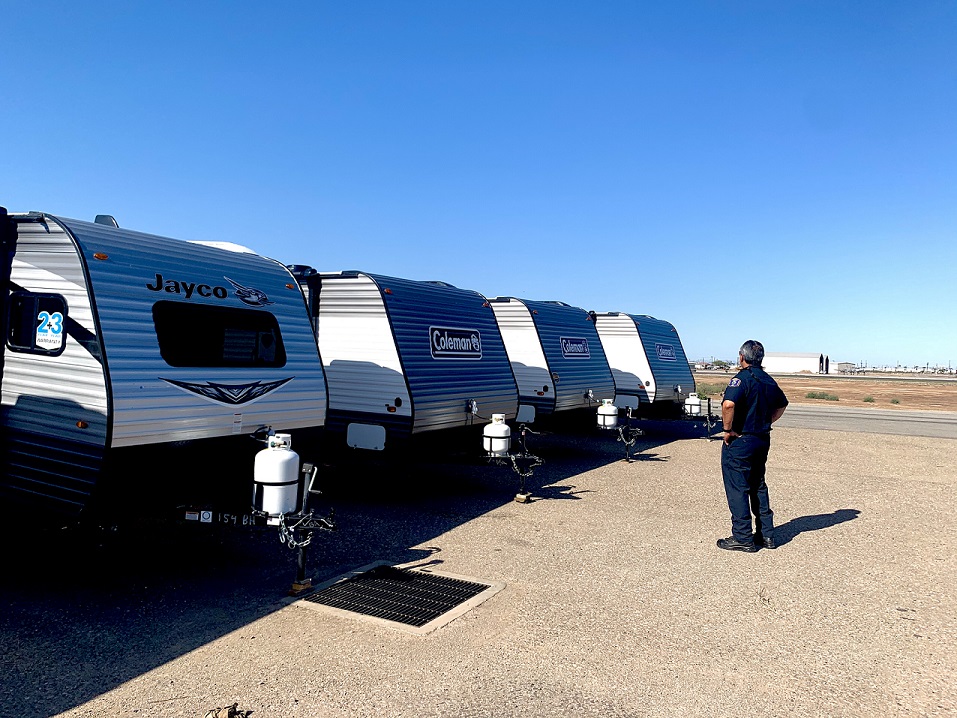 Some 10 trailers that will be used to quarantine the homeless who test positive for COVID-19 were provided by the state to the county under the governor’s $500 million emergency funding package authorized by the Legislature. The trailers were to be placed at the Imperial Valley Fairgrounds. | COURTESY PHOTO
Home
COVID-19
In COVID-19Regional News

Homeless in a Pandemic: Where Have After All the Vouchers Gone?

EL CENTRO — Although half a million dollars in emergency funding to protect the county’s transient population from exposure to the coronavirus has already dried up, the closed program has still launched some controversy over how homelessness is being defined amid the backdrop of the pandemic.

Jessica Solorio, founder of Spread the Love Charity, a group that advocates and provides services for the homeless in El Centro, expressed concern recently about a $528,000 state hotel voucher program going to “couch surfers” instead of to individuals with emergency needs.

“I’ve asked for a list of who was given a voucher, but I was told that I was not able to be given access. The county has to take it at face value. How do you prove whether someone is sleeping on a couch or (in) a tent? The homeless definition is so broad. Anyone unstably housed? I don’t know what their criteria was,” Solorio said May 11.

Meanwhile, the county also has received 10 trailers to quarantine homeless persons who test positive for COVID-19. The trailers were to be placed at the I.V. Fairgrounds in Imperial.

The trailers were obtained under the governor’s $500 million emergency funding package authorized by the Legislature, with $150 million of that funding set aside for local emergency homeless actions. That funding was divided into two uses, including $100 million to local governments for shelter support and emergency housing for the homeless.

Some $50 million went to the state Department of Social Services and the state Office of Emergency Services to purchase the travel trailers and lease rooms in hotels, motels and other facilities in partnership with counties and cities to provide immediate isolation placements throughout the state for homeless individuals, according to a May 8 county press release.

Imperial County Department of Social Services, in conjunction with the Imperial Valley Continuum of Care Council and other county services, received some $528,000 to provide housing to the homeless who otherwise would be unable to shelter in place, mostly to be used for the hotel voucher program. Most recently, according to a county press release, the county has launched the trailer-based COVID-19 Homeless Housing Program as a step to shelter homeless persons who test positive for the virus but are not ill enough to be hospitalized.

“This is going to take a community-wide effort,” Veronica Rodriguez, director of the Imperial County Department of Social Services, stated in the May 8 release. “It does spark a conversation about the importance to work as a community to address the bigger system issues we have of homelessness in our county.”

Rodriguez said the pandemic has forced more open discussion on how to care for the homeless, whether it involves those living on the streets or those who live “couch-to-couch.”

It’s precisely the “couch-to-couch” definition that has Solorio and other homeless advocacy groups concerned over who the voucher program went to help.

Imperial County Public Information Officer Linsey Dale confirmed the $528,000 program has run out of funding and ended. She said it was being run through the Workforce and Economic Development Department and county Public Administrator.

Solorio was frustrated local nonprofits with boots already on the ground were not involved in selecting recipients for the voucher program.

“Me or Maribel Padilla from Brown Bag Coalition in Calexico would have known who was homeless. Neither Maribel nor myself were given the opportunity to be a part of the voucher program. They ran out of vouchers already and there is a long waiting list,” Solorio said.

The homeless population Solorio said she knows has been unaffected by the voucher program.

“We are running at full capacity. The only difference is we are not seeing homeless in our facility. We are going out and serving the homeless at their campsites, and they are not the ones who are receiving the vouchers. With $500,000, how many were they being able to house anyways. It’s not a lot of money and of course not all $500,000 goes to hotels,” Solorio added.

Dale said the county does not have any documentation that suggests the recipients of the vouchers are considered “living couch to couch.”

“Recipients of the voucher hotel program must sign a self-certification or affidavit indicating they are homeless and meet the priority criteria for the hotel voucher,” Dale said.

Dale provided more information May 13 on how the vouchers were distributed.

“Clients who reported to have tested positive for COVID-19, or had any underlying health issues, were given priority and fast tracked to receive services such as hotel vouchers,” she reported.

More on the Trailer Initiative

The trailers provided by the state to Imperial County are expected to meet the needs of those homeless who test positive, Rodriguez said in the release.

“If a homeless individual is diagnosed COVID-19-positive and he/she do not require hospitalization, the medical facilities conducting the test will notify county Social Services through a homeless hotline,” the press release states. “At that time, a facilitator for the county will begin the coordinated effort and enroll the individual into the COVID-19 Homeless Housing Program to provide care and address the most immediate needs such as the quarantined shelter as well as medical care and food.”

Individuals quarantined will have access to coordinated support through a centralized operation center, according to the county.

“Our coordinated care services are strictly to help them recuperate from COVID-19 and aim to transition them to sustainable housing options upon their return to the community,” Rodriguez stated.

Dale said three individuals were occupying three trailers as of May 13.

As part of Gov. Gavin Newsom’s plan to re-opening the state from mandated closures and stay-in-place orders, counties must address their homeless populations in general.

Dale said the county has made extensive efforts to help the homeless to meet the governor’s standards.

“There are various efforts in the county to house the homeless population. The systemic issue of homelessness is related to the limitations of housing options in addition to engagement. The solution is simple: housing options,” Dale said.

“Since the voucher program started, the agencies have been able to provide shelter to over 140 homeless individuals, which is over half the targeted 15 percent and it does not include those homeless housed through other county programs such as Housing Support Program for CalWORKS families experiencing homelessness.” Dale continued, “The HSP program has housed 150 families in temporary and permanent housing.  Through the partnership with Imperial County and the Imperial Valley Continuum of Care Council, we will continue to shelter/house homeless through the COVID crisis and recovery, projecting we will surpass the 15 percent target number indicated by the governor’s re-opening plan.”

Next
BREAKING NEWS: IVC Joins SDSU-IV in Not Re-opening In Fall