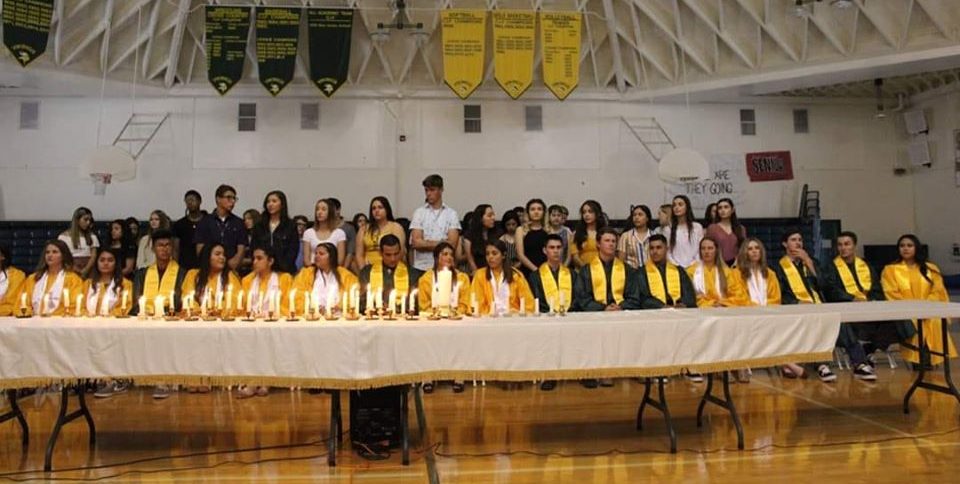 UPDATE: Holtville High Graduation Will Light up the Night

(UPDATED 10 p.m.: The new parade route as of May 29 is explained in an editor’s note in the body of the story and in the caption beneath the outdated map.)

HOLTVILLE — Holtville High School’s Class of 2020 was surprised via Facebook the morning of May 27 when the school announced graduation will be taking place with extra pomp and circumstance.

On June 4, students will be treated to a five-part ceremony that will end with an extravagant firework display that will be visible even beyond the city limits.

“To maintain social distancing the firework company suggested we pay a little bit more so fireworks can go higher, and everyone can see them throughout the city,” Holtville High Principal Anthony Arrevalo said.

“Graduation is broken up into multiple phases or steps that will actually give the students more than they would get in a traditional graduation ceremony,” Arrevalo said during a Zoom meeting with a reporter in which he detailed his five-phase plan for the ceremony.

“The majority of students are going to line up on Melon Avenue facing Sixth Street. The top-20 students will line up on Myrtle Avenue in their cars. The parade will come by Sixth Street and turn up (by) Finley Elementary (on Chestnut Avenue) and then by Holtville Middle School and then by the High School,” Arrevalo said. “Students need to be there by 6 p.m. The parade starts at 6:30.”

(Editor’s Note: On the morning of May 29, the Holtville Tribune was informed the parade route had changed but that no new map had yet to be released. The changes were the following: the parade starts on Sixth Street and heads east to Chestnut Avenue, where the route turns north on Chestnut to Ninth Street, and then heads west on Ninth Street to Olive Avenue, and finally, heads south on Olive to the ceremony at the High School.)

He highlighted some guidelines for vehicles participating in the parade. Limousines, RVs and tractors will not be allowed. One vehicle per graduating student will be permitted in the parade. The student should be in the passenger seat and be driven by a parent or guardian.

“We encourage students and their families to decorate cars with Holtville High-related decorations. Parents and guardians must remain in their vehicles. Photographers will take photos of every single student in their vehicles and as they receive their diploma. Parents may view the ceremony from their vehicle.”

The principal encouraged any student who does not have transportation to reach out to the school and they will find a solution.

The High School was careful in planning for the event to meet guidelines issued by the county Public Health Department for social distancing as well and worked closely with the county Sheriff’s Office to create a safe event.

The parade will be led by a sheriff’s car at the front, the Fire Department, and then a school bus followed by co-valedictorians Ella Hoyt and Emil Schaffner, the top-20 members of the class and the remainder of the students, Arrevalo said. Sheriff’s deputies will be stationed on the north and south ends of Holt Avenue.

“After finishing the parade on Olive Avenue, students will drive past the math building (at the High School) where there will be a podium. Students will tell a person how to say their name. When the vehicle drives by (a) table. The student will reach out of the table and pick up their diploma and hear their name announced on a loudspeaker,” Arrevalo said.

About 20 to 30 yards after the student picks up their diploma, they will step out of their vehicle for a photo opportunity in front of a backdrop created by the parent committee, Arrevalo said, after which they will walk a few feet, get back into their vehicle and the graduation ceremony will be over.

Next will be five-minute firework extravaganza, Arrevalo said.

“If we start our parade at 6:30, we should start announcing kids by 7. The estimated time for fireworks to start is by 8:30,” he said.

“We brought in a company to video tape the graduation to make it available online livestream on Facebook. This Friday we will bring in valedictorians and salutatorians to record a pre-recorded video and put it into a graduation format. A few days after the ceremony we will release this video,” Arrevalo said of the digital version of the ceremony.

A few staff members who are into photography along with a few community members will be stationed throughout the parade route taking photos to share with the community, Arrevalo said.

On May 26, the Holtville City Council approved the High School’s request for the fireworks show. “Everybody nationally feels sorrow that this year’s graduating class will not get the same experience as everyone has in the past. We are trying to give a semblance of normalcy to our seniors. We have had fireworks displays at many graduations and the council felt they should try to accommodate and give these guys something special on their special night,” City Manager Nick Wells said.