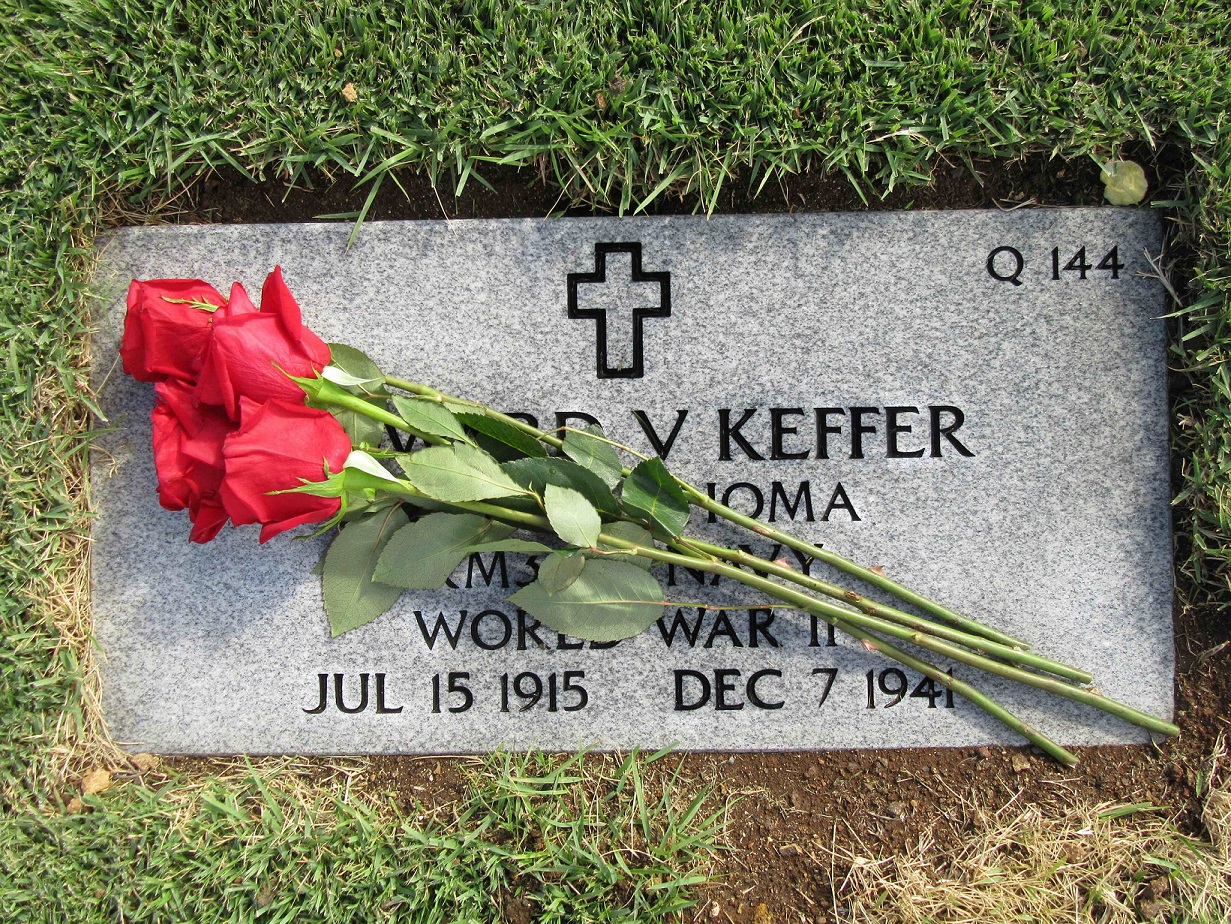 Roses lay across the headstone of Navy veteran and Holtville native Howard V. Keffer, who was killed in the attack on Pearl Harbor on Dec. 7, 1941. Keffer's remains, which were identified in 2018, are in a Hawaiian cemetery. | COURTESY PHOTO
Home
Local News
In Local News

Refusing to Forget: Honoring Howard V. Keffer, Others Who Gave All

HOLTVILLE — As Americans, on Memorial Day we remember those who fought, and died, for our right to “Life, Liberty, and the pursuit of Happiness.”

This tradition started in the age of the Civil War and became an official holiday in 1971.

Long before the day was recognized, though, some records show that independent communities would gather to honor their soldiers. In truth, the legacy of the dead lives on when we remember, as a community, the soldiers from our hometowns who gave up their lives in the brutal nature of war.

Holtville is no different, as it honored its war dead on Memorial Day, May 25. Even if the community could not do so publicly this year due to COVID-19, it did so privately, in thoughts and prayers.

A Portrait of Howard V. Keffer

Although he is not buried in Holtville’s Terrace Park Cemetery, Howard V. Keffer is memorialized in the community as one half of the name of the local American Legion post, the Bradley-Keffer unit.

Born on July 15, 1915, to Laverne and Ethel Keffer, Howard V. Keffer came to Holtville from Los Angeles at a very young age with his parents.

A work by Doc C. Bitler, “Imperial County, and The Wonderful Imperial Valley,” records what the Valley was like during Keffer’s time.

Keffer and his family likely were some of the first brave adventurers who came to the Imperial Valley. They were willing to come and see if they could overcome the familiar “soul-repelling heat” that Bitler describes, trying to make a living off the fertile soil that the Valley provides for those who earned their place.

It is written in Keffer’s obituary that he was known to have been an active member of his high school. He graduated in 1933 and came home after college to help run the family ranch. Besides helping out on the farm, he was a well-known member of the 20-30 Club. The club is an international service group that focuses on giving young adults the leadership skills needed to better serve their community.

Again, Keffer’s dedication to service was demonstrated when he enlisted in the United States Navy Reserve in 1940, a year after the start of World War II. His rank was Petty Officer Third Class and Specialty Radioman Third Class.

In October 1941, he was at a U.S. Navy air station on Terminal Island. A month later, he was shipped out to Hawaii to join his shipmates on the USS Oklahoma.

The Oklahoma capsized from the attack, sunken for the most part by multiple torpedo hits, resulting in the death of Keffer and 428 other soldiers, according to a report by the Defense POW/MIA Accounting Agency.

On that day, Keffer lost his life with about 2,400 other people in and around Pearl Harbor, Hawaii.

Shortly after the attack by Japanese bombers and kamikaze pilots, President Franklin D. Roosevelt would describe the day “as a date which will live in infamy.”

The attack marked the date the United States was determined to involve itself in World War II.

For decades, Keffer was classified as missing in action until his remains were identified in 2018. He now rests in the National Memorial Cemetery of the Pacific in Honolulu.

Because of this pandemic, local veterans were not able to come together to celebrate Keffer’s life, and of the many others who were lost in combat, at Terrace Park Cemetery in Holtville.

Holtville local and veteran Basilio Castro shared his thoughts on Memorial Day during the pandemic.

“This is probably the first time in many years that the American Legion was not able to get together for a Memorial Day ceremony. At least we were able to visit the cemetery,” Castro said.

“This is a day of recognition to all our soldiers that died in war. We memorialize how brave they were to be there and die for this country, allowing us to have freedom, because of them we are free,” said Castro when asked what Memorial Day means to him.

Veteran Tracy Rascoe, executive board member with El Centro’s Boyce Aten American Legion Post 25 and junior past department vice commander-Area 5, gives thanks to his fellow soldiers. He also remembers those who did not come home and shares what Memorial Day means to him.

“I give a wholeheartedly thanks to all whom died while serving our country,” Rascoe said. “I also give a special remembrance to one of my young shipmates that we lost during a deployment in the Mediterranean.”

Rascoe was a U.S. Navy sonar technician during the Cold War era and experienced several close calls with Russia on that deployment.

Rascoe, along with 350 other men, were stationed aboard the Navy destroyer USS Thorn (DD-988).

He and his crew were stationed in Barcelona, Spain.

At the time, in 1987, the Washington Post had reported that two grenades attacked the United Service Organization. The attack killed Ronald Strong, Rascoe’s fellow sailor, and injured five others. It was reported in the article that “the force of the blast shattered the waterfront bar’s windows, ripped out a water pipe and damaged a car parked nearby.”

“I chose to just remain on the ship the second day. Otherwise, I would have been at the same place that second night,” Rascoe said. “The rest of my shipmates and I were blessed upon returning home. I was very blessed when we returned home, as I was able to see my wife and my son again.”

Rascoe continued by sharing who he remembers on Memorial Day.

“I think of Ronald Strong, his pregnant wife — at the time — and his daughter (who) was born fatherless just before we returned home,” Rascoe said. “I think of all the men and women that have given their all in the past and the ones that are putting themselves in harm’s way for us today.”

To Rascoe, Memorial Day is much more than “a Monday off, enjoying a cold one with family and friends, barbecue, or a trip to the beach.”

“I pray for every American to give thanks and never forget that Ronald Strong and every aforementioned life was worth something,” Rascoe said. “I also give thanks for those that lost their lives from something they obtained while serving and which later took their lives, like my father and many, so many others.”

Memorial Day is when we remember the reason why we are free. “God bless America, land of the free, because of the brave,” Rascoe said.

Previous
City of Holtville is Having a Growth Spurt

Next
IVC Taking Patients as COVID Cases Continue to Climb