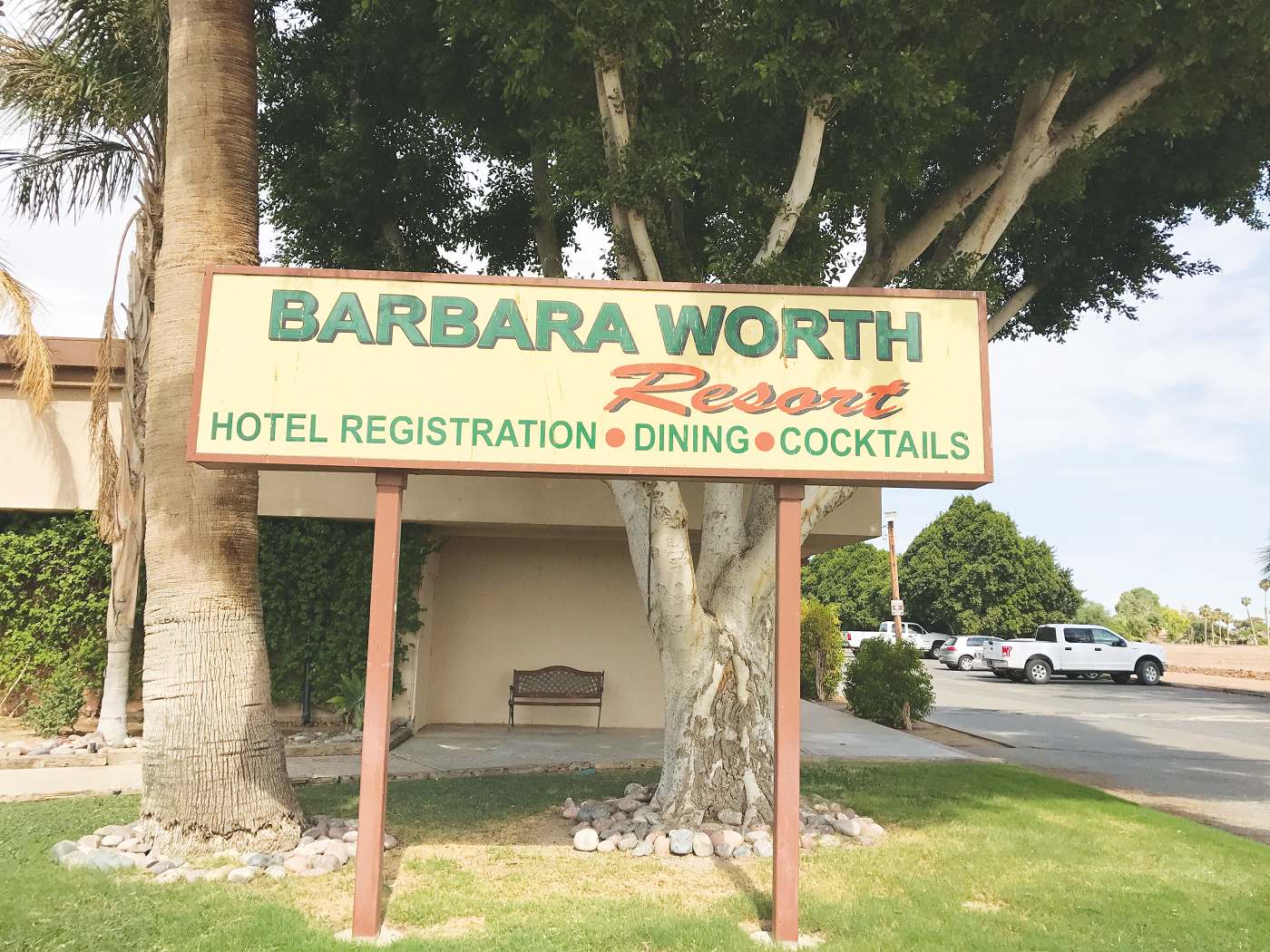 A sign outside the Barbara Worth Country Club is shown. Owner Eddie Mejorado said the property is in the midst of a financial reorganization but will remain open. A legal advertisement published in the Holtville Tribune on May 28 announced that the property was headed for the public auction block, as the property is in default of its $3.5 million loan and deed of trust. FILE PHOTO
Home
Local News
In Local News

Although iconic Holtville institution the Barbara Worth Country Club is in the midst of a financial transition, owner Eddie Mejorado assured that the hotel, events center and golf course will remain open while new funding is secured.

A legal advertisement published in the Holtville Tribune on May 28 announced that the property was headed for the public auction block, as the property is in default of its $3.5 million loan and deed of trust and is due to be sold on the steps of the County Courthouse at 2 p.m. June 23.

Although the announcement took some Holtville officials by surprise, including the city’s chamber of commerce, Mejorado explained to this newspaper and the chamber that the bank has come calling on a loan that dates back to 2012 that was never in his name.

He said he is in the process of securing a new source of funding from an investor in Utah to pay off the existing debt in the next week.

“It’s simple, I’ve been doing this a long time. The bank loan is up in June and they came calling,” Mejorado told the Holtville Tribune on May 28. “We’re going to wire the money in a week or so. It’s going to be paid.”

Mejorado and another group of investors bought the country club out of bankruptcy in an auction in June 2018, and he has been operating it since then, only his name has not been on the loan or the title. He explained that the lending bank, Clearinghouse Community Development Financial Institution, wants its money and initiated the auction.

It’s not clear whether Mejorado stopped paying his bills, considering the legal advertisement does say the property is in default. Mejorado acknowledged he will be buying it out of bankruptcy again, like he did in 2018.

The public auction is arranged by MK Consultants Inc. of Phoenix on behalf of deed of trust holder, First American Title Insurance Co. of San Diego. The loan was originated May 1, 2012, and still lists the title holders as Imperial Palms Resort, LLC.

Former owners Darrell Readshaw and Kevin Smith operated the county club as Imperial Palms Resort until it closed due to massive debt. A similar auction was pursued by the county tax collector in 2017 after property taxes were in arrears and numerous liens were issued against the property, according to past Tribune stories.

To Mejorado’s credit, Barbara Worth Country Club has remained open since he “bought” it in 2018, and recently, according to his social media postings, improvements have been made to the golf course.

Also, under Mejorado, he has successfully pursued a franchise agreement for the hotel with “Ramada by Wyndham,” one of the largest hotel chains in the country.

Although locally the hotel doesn’t appear to be actively marketed as a Ramada by Wyndham as of yet, Barbara Worth Country Club’s hotel is live on Ramada’s website here: https://www.wyndhamhotels.com/ramada/holtville-california/ramada-holtville/overview

Under the Ramada brand, there were more than 810 hotels across 63 countries in operation as of late 2018.

Holtville Chamber of Commerce executive Rosie Allegranza said Mejorado told her May 28 that with the new infusion of cash he will soon receive, she said he plans to make additional improvements to the facilities and the golf course.

Mejorado told this newspaper the hotel has been doing much better business since it became a Ramada franchise in January. He added he also has plans for the events center, which he calls a “lucrative” piece of the business. He said he plans to rename it “BW Ballroom.”

Additionally, the course will continue to be called the Barbara Worth Golf Course, and Caddies Sports Tavern and the restaurant will re-open once the COVID-19 conditions allow them to resume operation, Mejorado said.

Meanwhile, once the new money comes through, he said, the loan will be paid off and the auction will stop.

In another twist, however, the property is listed on an active real estate website, LoopNet.com, for $5.5 million. The site was last updated May 26.

Mejorado said the property is not on the market, but it was previously listed for $7.5 million on that same site. He could not explain why it was still up or why it had been recently updated. He said May 28 he would contact the site about taking the listing down. It was still active as of 6 p.m. May 29.

“Barbara Worth resort is on solid ground. It was not operational when I acquired the property. Since then, I have invested a substantial amount in improvements to the property and golf course. We obtained a liquor license. The COVID pandemic has been a pothole in the road but we are back up and running within permitted restrictions. The future for the resort is good,” Mejorado said in a prepared statement to this newspaper and the Holtville chamber on May 28.

Previous
Together, #BLM Protestors, Police ‘Still Have A Dream’