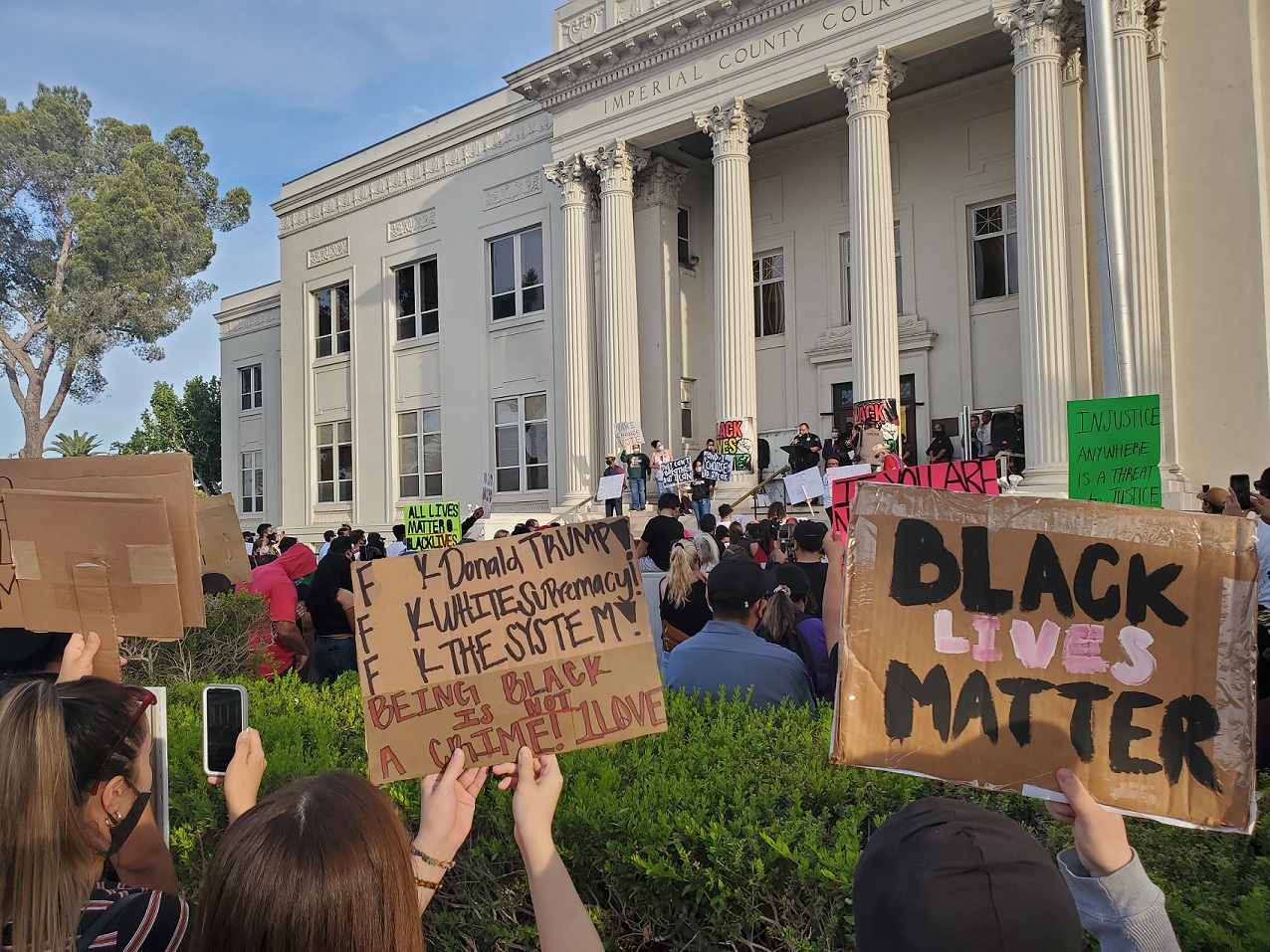 Crowds spread out along the lawn and common areas of the Imperial County Courthouse during a peaceful protest against police brutality and racism organized by the Imperial Valley Social Justice Committee and the local Black Lives Matter group on June 1. In the distance, Calexico Police Chief Gonzalo Gerardo can be seen addressing the crowd from a podium on the courthouse steps. | JAYSON BARNISKE PHOTO
Home
Featured Stories
In Featured StoriesRegional News

Together, #BLM Protestors, Police ‘Still Have A Dream’

EL CENTRO — Peace would win the day in El Centro as hundreds of people came together at the foot of the County Courthouse to demonstrate, loudly but calmly, the killing of George Floyd at the hands of a Minnesota police officer.

Unlike the violent protests that have rocked the nation in recent days in the aftermath of Floyd’s death, members of the local Black Lives Matter movement, Imperial Valley Social Justice Committee, and their supporters joined with Imperial Valley law enforcement on June 1 to peacefully honor Floyd and other unarmed black men who have died in recent weeks and call for an end to police brutality.

“The rally was a success. We are here to stand for a cause. Our lives matter. All lives cannot matter until black lives matter. This is a testament of what we can do when we all come together as one people,” said El Centro resident Hilton Smith, a coordinator for Imperial Valley Black Lives Matter.

“You are going to have those who try to disrupt a peaceful protest on social media. I want to say to those people, your attempt to silence us failed. This is going to be peaceful. That’s how we do it,” Smith said.

He was referring to the rumors that caught fire through social media much of May 31 and came to a head early June 1 warning that busloads of “out-of-town” protestors were descending on the Imperial Valley to cause mayhem, similar to that in many American cities and as near to the Valley as La Mesa, where buildings have burned and some ill-intentioned protestors have looted and attempted to injure law enforcement personnel.

While business owners throughout the Valley, from big-box chains like Walmart, Target and Home Depot, to local businesses along downtown Main Street near the site of the protest, boarded up their entrances and windows in anticipation of trouble, no trouble ever transpired.

Younger protestors got a little boisterous later in the night as crowds left the courthouse following the rally and moved their cries for social justice to the sidewalks of Imperial Avenue near Main. By and large, though, the demonstration remained peaceful and were certainly not violent.

“Our actions speak louder than words,” said one anonymous protestor when asked whether the late-night crowd would remain peaceful.

No reports of unrest were immediately reported.

Earlier, law enforcement officials and first responders spent much of the day June 1 getting ready for the protest by searching the city and other communities for signs of groups from out of the area, dispelling the rumors but being prepared nonetheless, Calexico Police Chief Gonzalo Gerardo told this newspaper a few hours before the protest started.

“Absolutely not. No one came from out of town for this rally. There is a lot of fake news, a lot of people trying to discourage us from this event. We worked closely with law enforcement in putting this event together.”

Thomas explained that she does not see law enforcement as a problem; rather, they are a part of the solution and that everyone in the community is part of that solution.

At the courthouse, organizers brought together several hundred supporters who were representative of the Valley’s ethnic diversity, as vehicles driving by the protest honked their horns in support non-stop throughout the event.

Smith was adamant about keeping the protest peaceful.

“Violence deters from peace. This rally brought us together as a community. We are trying to bridge the gap between the community and the police. We are not anti-police. We are anti-police brutality,” Smith said.

Still, Smith knows there are good officers out there, and event organizers invited local law enforcement agents to speak at the rally. Gerardo spoke, as did El Centro Police Chief Brian Johnson, who gave a powerful speech in support of the movement to end racism and police brutality.

“I denounce the actions that we saw that took a human life. I can’t stand in your shoes, but God gave me two ears to listen to you. There have been times when our actions as law enforcement agents may not have met your expectations.” Johnson continued, “I am a Chinese-American, bi-racial American, like many of you. Like you, I know the pain of racism and bigotry, the color of your skin, the slant in your eyes, or the accent in your voice.”

Demonstrations and law enforcement agents stood together on the steps of the courthouse in urging America and the local community to unite and overcome this challenging moment in history.

“I know God has united us in one simple way. It’s my blood. It’s everybody’s blood. We know life is not going to be easy and the things we face as a community are not easy, and that is why we are here every single day,” Johnson said, “It’s an honor to be your chief of police. You are my boss. I work for you.”

Adrian Lawson of El Centro felt inspired after the rally.

“We showed the other cities, counties and states that we can do a peaceful protest without violence and looting. I am glad we (Imperial Valley residents) came together today to stand for the injustice against African-American people,” she said.

Paul W. Cox of El Centro stood on the sidewalk in front of the courthouse during the rally burning a bundle of sage.

“I think the town overreacted a little bit out of fear by boarding everything up, but I understand it. There is more love here than that,” Cox said. “Maybe there is a little ignorance on some peoples’ behalf. Some of the signs were on both extreme beliefs. I hope this will help move the pendulum towards the middle.”

Cox said he feels that bigger cities could have prevented looting during recent protests and that put more fear in citizens of small towns.

“If we could just preach love and peace, less crazy looting will happen. But is makes sense because America was built with a lot of violence. It kind of happens here,” he said.

Although no trouble ever occurred, there was a heavy law enforcement presence around town.

About a dozen mounted U.S. Border Patrol agents gathered on horseback behind the Calexico Chronicle office parking lot during the rally.

Border Patrol Agent Mike Matzke, who is president of the local patrol agents’ union, spoke to a Chronicle reporter.

“My biggest concern is the safety of our guys. Nobody wants to see their town burned down,” Matzke said.

Also, El Centro Police Department’s Facebook made posts before, during and after the protest to urge “calm and unity in light of events in other cities.”

Meanwhile, Linda Gardner, owner of In Your Home Health Care, attended in support of the rally.

“I think that rally is a good thing as long as it stays here. I am concerned because I have a business on Main Street in El Centro. If they were to burn us up, it would take us a long time to get back to helping people.”

Gardner said she has not experienced any racism from the local law enforcement community but does have two Hispanic employees who have.

James Brooks of Brawley attended the rally to support the cause.

“It shows there are a lot of people who care. I honestly didn’t think this many people would be here. I’m with it. I like the movement, it’s heartfelt,” Brooks said.

“Of course, racism is everywhere. It needs to stop. This is a step and hopefully it can open people’s eyes. That’s why we are here, to bring peace to all the racists,” he said.

“I feel our community learned from the rest of the other counties and states what happens when we weren’t heard,” Ashley Rodriguez of El Centro told a reporter after the rally.

“I appreciated that the cops were quick to kneel and show us that we had a voice and we were heard,” she said.

Next
Owner: Barbara Worth Country Club in Financial Transition, But Remains Open