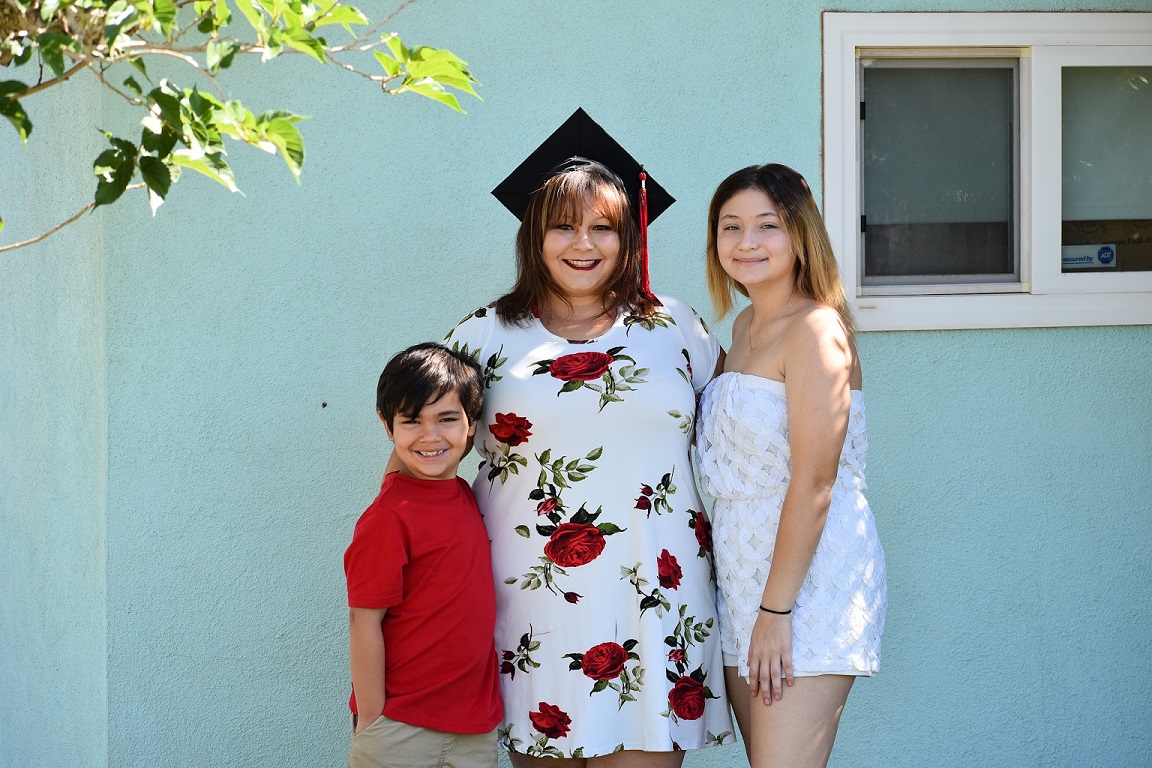 Holtville Woman, Wanting A Better Future, Reached for Her Dreams

HOLTVILLE — Pregnant at age 15 and a teenage bride a few years later, life has been a series of struggles for Kimberly Schiltz. Yet through faith, the inspiration of her mother and two children, and a drive to inspire others, the Holtville working single parent has come a long way.

Recently, after a long, circuitous path to get where she is today, Schiltz completed her final class on April 18 for a Bachelor of Arts in Liberal Studies (multi-subject education) through San Diego State University-Imperial Valley campus in Calexico.

“I aspire to make a difference in young children and hope they can grow up with good morals and values if they are instilled in children at a young age,” she said. Schiltz plans to become an elementary school teacher.

As a counselor announced the various awards students earned during Schiltz’s class of 2020 graduation ceremony via Zoom, she was surprised to receive the BRAGG award, which stands for “be kind, respect your reputation, act with accountability, grow with your experiences, and grow a growth mindset.”

Schiltz was one of three Imperial Valley students awarded this honor. When asked what she attributed her getting this award, she said, “Displaying academic responsibility and honesty.”

Pursuing a college degree to build a better tomorrow for her children has been challenging — childcare, housing, and putting food on table proved difficult — but Schiltz was determined to succeed.

Schiltz’s inspiration has been her mother, Angela Marlow, and her two children, Alexis Piper, a 14-year-old freshman at Holtville High School, and Dillon Anzures, her 6-year-old son in first grade at Finley Elementary School.

“My mom is my inspiration,” Schiltz said. “She raised me as a single mom and always did everything that she needed to do to provide for me and my two sisters. My kids are also my inspiration, and I can be an inspiration to them as well.”

When asked how she has overcome challenges in life, Schiltz said, “I faced them head on with the support of family, friends, and my church family.”

Schiltz tells how she grew up in Holtville and moved to Indiana after her freshmen year in high school at age 14. Then she got pregnant at age 15 and had a daughter two days after she turned 16. Six months after her daughter was born, Schiltz and her mother moved back to Holtville.

“I became a mother at age 16 and basically I knew I needed to grow up and push forward. I graduated high school about a year early so that I could get my life together for my daughter,” she said.

“I have known Schiltz since a child but got to know her more about age 17. Being a single mother, she has had numerous obstacles, but she had determination and never quits, said Pastor Norman Chandler of Turning Point Ministries in Holtvile. “Through adversity, she has shined.”

She is very dependable and trustworthy, which is reflected in her contribution at church through children’s Sunday school and vacation Bible school.

Chandler tells how the members of the church did a drive-by parade celebrating her graduation, letting her know how proud of her they were.

Stacie Chandler, wife of pastor Chandler, said, “Kimberly is a Godly woman. She carries herself with dignity and has been an inspiration to others. She has a special way of teaching the children and encouraging others.”

“I have a group of ‘women who persevere’ and she is definitely a warrior … puts her heart and mind in it and follows the Lord. She will be able to provide and be a great educator,” Stacie Chandler said.

“I have actually been going to Turning Point off and on since I was about 17 years old,” Schiltz said.

When Schiltz turned 18, she left to Job Corps in San Diego. She completed child development studies at age 19.

“It was a difficult decision to try to get something done and leave my daughter with my mom, but I saw her often but not every day,” Schiltz said.

Shortly after that, she got married at age 19. Without going into detail, Schiltz said, “Marriage was a struggle. I stood married for nine years and got divorced two years ago.”

When I got back to Imperial Valley (from Job Corps), I went through the (Imperial Valley Regional Occupational Program certified nurse assistant) program and worked as a CNA for a while. Then worked at ARC (Imperial Valley) for several years. She considered getting an LVN (licensed vocational nurse), but she has always had a passion for working with children.

She “prayed about it and something told me that teaching was a career path that I needed to take. From that moment on, I knew that was the path to take and have been confident about that decision.”

Schiltz said, “I trusted God to lead me, and that is the only way I have been able to accomplish everything and go through everything that I have.”

“It took me nine years to graduate from IVC because I was working and taking courses on and off part time,” she said.

In 2018, Schiltz graduated from Imperial Valley College with an associate’s in liberal studies.

“Then after graduating from IVC, I got a burst of determination and was able to complete my bachelor’s within two years at San Diego State,” Schiltz said.

Part of the liberal studies program included a two-week study abroad program where she traveled to Merida, Mexico. “I created lesson plans and taught English to kinder through sixth-grade children.”  She stated that she did a barbacoa sale and a TV raffle to raise money to help fund the trip.

“It (abroad program) gave me understanding of a different culture and was beneficial because a lot of Imperial Valley students are Hispanic, and this would help me with students in the future.”

“My last semester at SDSU-IV was affected by the coronavirus, and it was definitely difficult,” Schiltz added.

Schiltz was juggling several major areas at one time during this last semester. “Being a teacher at home for my two children and staying on top of school work, but (I) felt successful once I received my grades — all A’s in all my five classes, which is the first time,” she said.

Schiltz has now successfully completed her long goal of getting a Bachelor of Arts in Liberal Studies but she is not finished.

“I have submitted an application for CalState teaching credentials program,” she said, adding she expects to finish in December 2021.

Becoming a mom, Schiltz said she saw the impact a teacher can make. “I have worked with kids for a long time through different programs, and I always known that I want to work with kids.

Schiltz emphasizes that her success has been attributed to her mom and children in addition to her church family. “Turning Point Life Center has always been supportive of me, and (I) definitely give credit to Suzanne and Julia who are my closest friends who graduated with me,” said Schiltz.  Failure was not an option for Schiltz. When asked, what piece of advice would you give to anyone going through a challenge, she responded, “Never give up.”