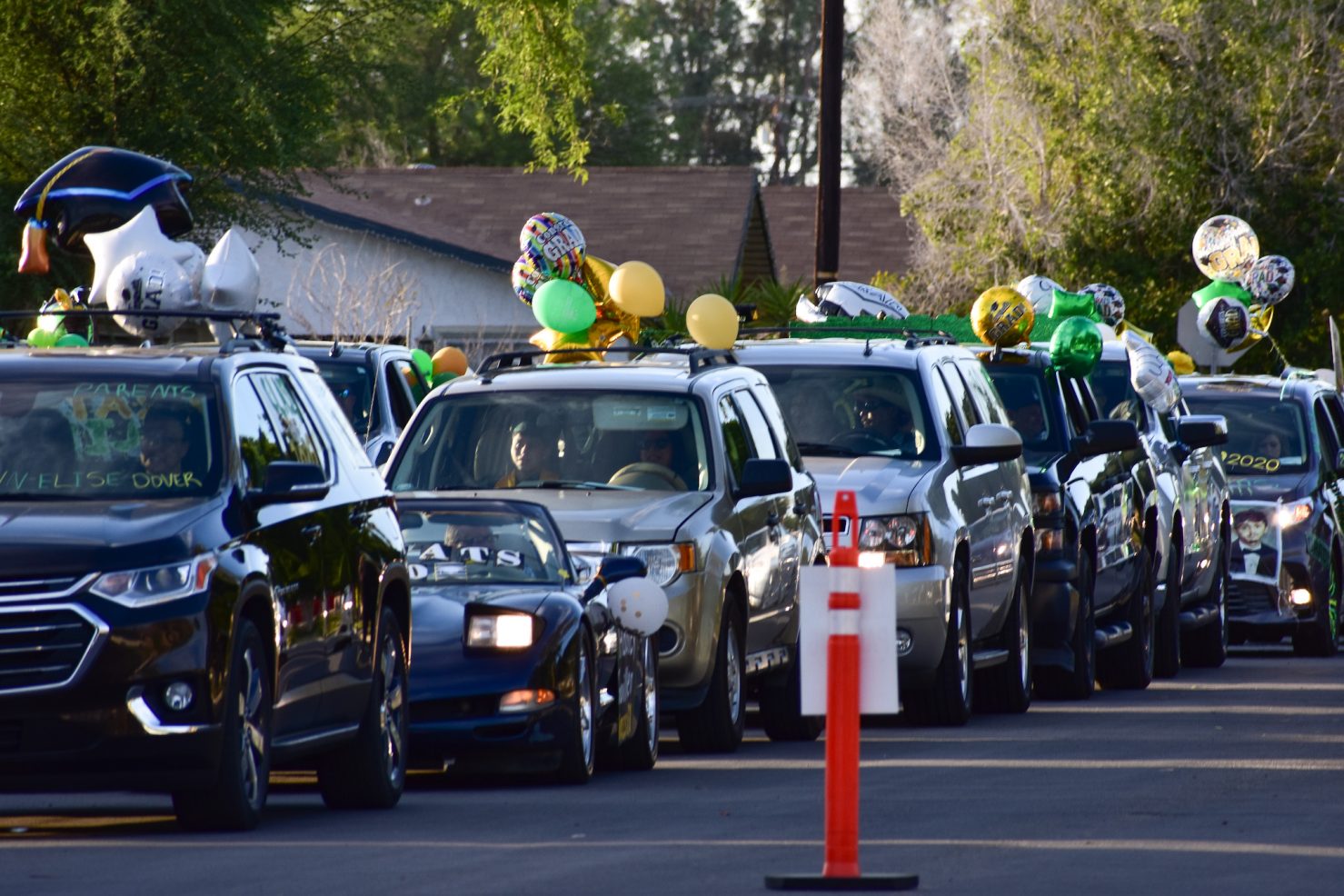 Balloons, paint and magnetic decals decorate the cars and trucks that took part in Holtville High School’s Class of 2020 graduation ceremony and parade through the streets of the city June 4. Each vehicle contained one graduate and one parent or guardian to celebrate the occasion. The night ended with a fireworks display over Holtville High. CORISSA IBARRA PHOTO
Home
Local News
In Local News

Viking Graduation Goes Off with a Roar of the Engines, a Bang Overhead

Holtville High School administrators pulled out all the stops in creating a graduation that would validate the effort of its class of 2020 on the evening of June 4.

“Since the day school closed, the No. 1 priority each day of myself and everyone in my office was to give these kids a graduation that would recognize them for their incredible achievements,” Holtville High School Principal Anthony Arrevalo said in an interview May 27.

Arrevalo was true to his word, helping create a spectacle that was part pre-recorded and part live event that was streamed to the entire world via Holtville High School’s Facebook page.

COVID-19 may have taken the second half of the class of 2020’s senior year, but it would not take their graduation ceremony.

(Read about what graduates Anell Alvarado and Ella Hoyt thought of the work put into making their graduation special.)

Students who participated in the ceremony by giving speeches or singing, recorded their presentations in the high school gym in the weeks prior to the ceremony.

The parade at began at 6:30 p.m. as students, each with one accompanying family member, lined up in vehicles decorated to the max with paint, balloons, stickers and magnetic signs on Sixth Avenue in Holtville and made their way toward the high school.

Several Vikings’ staff and members of the community volunteered to photograph the grads in their caps and gowns from different vantage points along the parade route during the event.

As the motorcade proceeded toward the high school, Anell Alvarado, 2020 Holtville High graduate, sang “The Star-Spangled Banner” in a pre-recorded session in the high school gym.

Ceremonies were led by Arrevalo from behind a podium on the lawn of the school on Olive Avenue. Surrounded by several school administrators and teachers spaced out on chairs 6 feet apart, Arrevalo gave a speech.

“As a fifth-generation Viking, I stand here on the shoulders of an amazing community. This was our year to finish strong, make memories, enjoy senior traditions and celebrate as one. On March 16, our lives were changed forever,” Holtville High co-valedictorian of the class of 2020, Ella Hoyt, said.

Hoyt recognized that students have found strength and support during this difficult time from friendships that could only be cultivated by living in a small close-knit community like Holtville.

“The class of 2020 is special, not just because of the pandemic, but because many of us have grown up together. Only in Holtville could I have been named co-valedictorian with Emil, who is a lifelong friend,” Hoyt said.

Emil Schaffner and Hoyt went to preschool together and ended up the top-two in their graduating class.

A video played on a screen on the school’s lawn recognizing the top-20 students before the procession of vehicles arrived at the podium.

Each student stepped out to receive their diploma and took pictures in front of an elaborate backdrop before walking back to their car. Students did not overlook the importance of the moment as many had tears streaming down both cheeks when they walked to accept their diploma.

A video yearbook then showed pictures of the graduates’ development from the time they were small children, all the way up to their last memories as students on the Holtville High campus.

The highly anticipated fireworks display started at 8:30 and did not disappoint anyone in the entire city of Holtville and surrounding areas. The incendiary show lasted for about five minutes.

Although Holtville High School’s 2020 grads might not have graduated the way they planned, they were left inspired, validated and ready to make a difference in the world as they transition to their next stage in life.

Previous
Construction to Start on Next Phase of New West Port