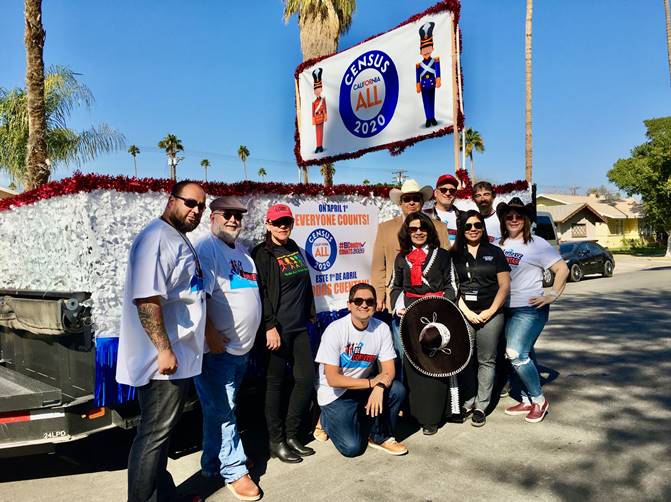 HOLTVILLE — After COVID-19 threw a wrench in the well-oiled census machine, local county and city officials have done everything in their power to get an accurate count of the population.

During the June 8 Holtville City Council meeting, U.S. Census Bureau reporter Juan Ramirez announced to the council that Holtville ranks first among local cities in the percentage of its population that has completed the 2020 Census count survey.

“Holtville is up to 68 percent in the census; Imperial is at 65 percent. Holtville is in the lead for the Imperial County,” Ramirez said.

“Our staff really put a lot of time into preparing for the census. Kariza Sambrano, city clerk, Hailey Dowsey, human resources for the city, and Ginger Ward, council member and past mayor, have been key to our success,” Holtville City Manager Nick Wells said.

“It gives us a better town. We’re shooting for 100 percent. We’re at 68 percent now and leading in the county because city staff are working really hard to do that. The more people we can get to take the census, the more money we get to enhance programs in the city,” Holtville Mayor James Predmore said.

All the mayors and supervisors in the county recently filmed a commercial that should air soon encouraging people to get out and complete their census by mail online or by phone, Predmore said.

Census data, which only gets updated once every 10 years, determines the number of seats a state has in the U.S. House of Representatives and other state and federal lines of jurisdiction. The count also factors into federal and state funding formulas and is said to represent $2,000 a year in lost federal funding for every person left uncounted, according to the U.S. Census Bureau.

The 2020 Census will determine how more than $800 billion in federal resources will be distributed each year for the next decade to state and local communities, according to the bureau.

Holtville was the first city in the county to start a committee for the census, Deputy Imperial County Executive Officer Esperanza Colio-Warren said when thinking of reasons for Holtville’s success in the 2020 census.

Having a float in the parade in Holtville in the Carrot Festival was a great opportunity to get Holtville residents excited about the benefits of completing the census, Colio-Warren added.

“The more opportunity we have for people to respond to the census, the better. We call it the caravan. We are going to be doing caravans, if everything goes well. The state asked us to stop for a while because of all the protests,” Colio-Warren said.

“We are going to have one in El Centro, one in Calexico and possibly one in Imperial. We have to do extensive work with the city to organize these caravans in a manner that encourages social distancing,” Colio-Warren said.

Colio-Warren was quick to recognize that each community has its own unique set of challenges when working toward a complete count.

“Each one of the cities is trying to make an effort to convince the community to participate. Some communities are more difficult than others. Hard-to-count populations are individuals least likely to compete the census. There are 20 different categories, the highest of which are Hispanics, seniors, recent immigrants and children younger than 5,” said Colio-Warren.

More rural cities like Heber face a unique set of circumstance in completing the census. In East Heber, residents received correspondence in P.O. Boxes and in West Heber they have mailboxes at their homes and receives notifications from the U.S. Census Bureau, Colio-Warren said.

“Calexico is a different population, and I don’t want to say anything bad about a particular community, because they all have unique circumstances. The census effort is all about educating the community about why the census is important. A lot of people don’t know why it is so important for them to participate,” said Colio-Warren.

“Because of COVID-19 we are now going into doing a lot phone banking, which basically means calling people to encourage them and give them information about anything they want to know about the census,” said Richard Ortega, special project director for Calexico’s Neighborhood House. Ortega is one of the leaders of Calexico census subcommittee along with Calexico Mayor Bill Hodge.

Calexico census volunteers are being encouraged to hold a conversation with people about why the census is important, Ortega said.

“I am in conversations with the county to start making these phone calls directly to our population and we are very close to that. We have cell phones for our volunteers, and they will use those phones to make calls,” said Ortega. Ortega is looking for volunteers to help making calls in Calexico and encouraged those interested to call 760-455-0520.

Previous
With Love and a Little Humor, Hazmat Bakery Delivers Doughnuts During Distress