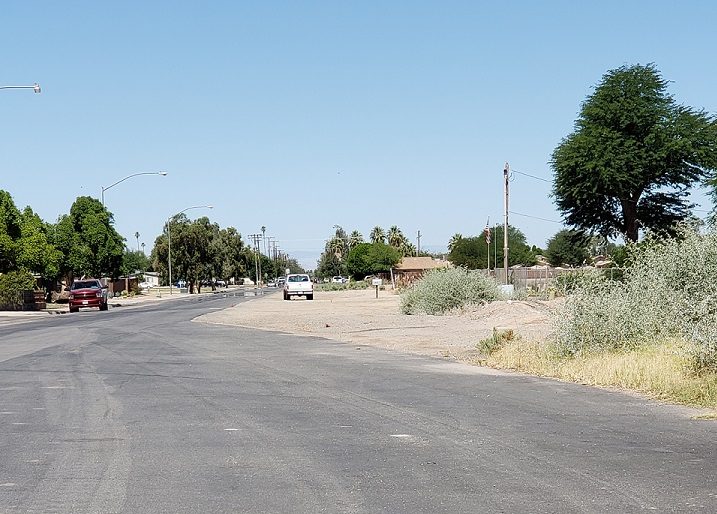 A stretch of Ninth Street in Holtville between Oak and Beale avenues is shown without sidewalks. The city postponed a decision June 8 regarding using SB1 Gas Tax funds to supplement design and construction costs for the project that widen the road and add sidewalks and gutters. | JAYSON BARNISKE PHOTO
Home
Local News
In Local News

HOLTVILLE — A decision on a proposal to use SB1 Gas Tax money to supplement design and construction costs for widening and adding sidewalks and gutters to Ninth Street (East Alamo Road) between Oak and Beale avenues near Holtville Middle School was postponed until June 8.

Due to an incorrectly dated agenda, no action was taken by the Holtville City Council, and the decision will go back to the council for its June 22 meeting, City Manager Nick Wells said.

This gives Holtville residents another opportunity to address comments and concerns about the project to officials during a public hearing.

The council will vote to use SB1 Gas Tax funding to complete the project on June 22. The future sidewalk project will require more than just pouring concrete, so the city had to come up with more money to do the project, Wells said.

“At this point there is no sidewalk from Oak to Beale. In order to make it meet up, we have to widen the street on the north side where the sidewalks will meet,” Wells said during the June 8 council meeting.

The council has already dedicated $374,000 from the Federal Highway Act fund via the Congestion Mitigated Air Quality grant program to fund the project.

After inspecting the project site, city engineers told Wells the cost would be higher than the original estimate of $374,000 because a plan would have to be developed that worked around existing Imperial Irrigation District infrastructure.

At the June 8 meeting, Wells proposed the remainder of funding for the project come from Holtville’s available SB1 Gas Tax funding, which would be $116,508.

A final estimate of costs for the project should be available by the end of the month, Wells said.

“For every project that goes through CMAQ, there has to be a document attached stating that it has passed air quality standards. Meeting those regulations increase the time it takes to complete projects like these,” Holtville Mayor James Predmore said.

“The money the government gives out to cities has a lot of regulations and stipulations to it. Whenever the city is given the money to improve the conditions around town, the council will almost always pass it,” Predmore said, implying council would pass the proposal at its June 22 meeting.

Under the current proposal the project estimates completion of the sidewalk and street widening by October.

Next
With Love and a Little Humor, Hazmat Bakery Delivers Doughnuts During Distress