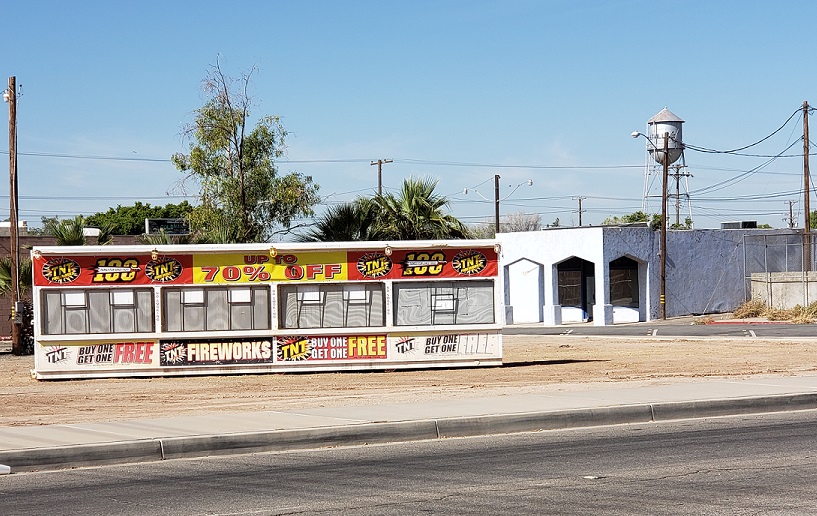 A fireworks stand in the city of Holtville that is scheduled to open July 1 sits at the corner of Fifth Street and Holt Avenue. | BRENDA TORRES PHOTO
Home
Local News
In Local NewsRegional News

“What a better way to support your local nonprofit by purchasing fireworks from their stands to celebrate your independence, as long as you practice appropriate social distance, avoid large family gatherings and follow recommended fire-safety measures,” Favila said.

“This would have been our 30th year. It’s a strange feeling. We’re thinking it’s getting closer to the Fourth of July, but in the next breath I realize we won’t be doing Freedom Fest this year,” KXO Radio’s Gene Brister said during a June 22 interview.

There are those who have always been more interested in setting off their own fireworks instead of watching a show, but it is important to know where you are legally allowed to do so.

“Fireworks are not allowed in the unincorporated areas of the county. However, each city is different depending on what their boards approved or did not approve in relation to fireworks,” Imperial County Fire Department Chief Alfredo Estrada stated in a June 22 email.

“For example, the city of Imperial allows them within their city. Also, if approved, only ‘Safe and Sane’ fireworks are allowed to be sold and bought,” Estrada said.

There are two different categories of fireworks but only one classified for sale and use in California by the state fire marshal, and this “Safe and Sane,” explained Favila.

“‘Safe and Sane” fireworks are what are being sold at the two stands in Calexico this year. These are fireworks like sparklers that do not fly. Fireworks in the “dangerous” category and not for sale in California fly and continue to burn after disbursed.

“These are the fireworks people buy in Mexicali,” said Favila, who added most of the other cities in the county have permitted the sale and use of “Safe and Sane” fireworks within their city limits.

“Illegal fireworks have always been a problem in Calexico because of our proximity to the border. We always get calls for fireworks. I expect locals to use fireworks more this Fourth of July because the fireworks show was cancelled and people want to celebrate their independence,” Favila said, who remind people that illegal fireworks found by Customs agents during border crossings will be confiscated.

Favila was aware of national news media reports indicating a rising nationwide trend of the use of illegal fireworks as preparations for the Independence Day ramps up.

Holtville will allow fireworks use within its city limits this year and will begin operations at a fireworks booth managed by the Chamber of Commerce on July 1, Holtville City Manager Nick Wells said. “People should get a bucket of water to have just in case when planning to use fireworks. They can use the bucket in case of fire and to displace the remnants of their fireworks when finished. Also they should keep a hose near just to be safe and avoid using fireworks near areas with dry grass,” said Favila, who this year along with fire safety, strongly encouraged the use of social distancing to prevent the further spread of COVID.