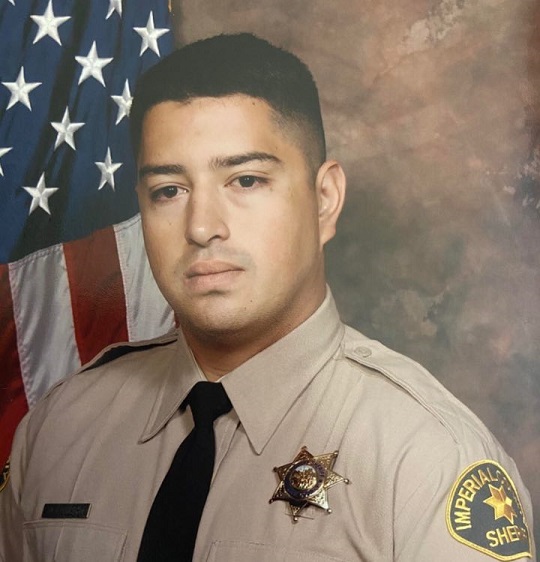 HOLTVILLE — A county Sheriff’s Office deputy feared he “was going to die with my own firearm” when he was attacked by a man he approached on a Holtville street in November 2018.

“I still replay the incident in my head of what I could have done differently. The profession of law enforcement is inherently dangerous,” Senior Deputy Miguel Calderon is quoted as stating to county Deputy Probation Officer Aryana Singh, who prepared a pre-sentence report on Calderon’s assailant, Alex Padilla.

“That night in a split second, my mind changed from being able to take Padilla into custody to fearing I was going to die with my own firearm. After escaping, I feared I was going to bleed out because I did not know how serious I had been stabbed and there was so much blood,” Calderon stated.

The recollections are part of harrowing account of the incident included in the report on file in Superior Court. Such documents are created to guide judges in sentencing convicted defendants. They remain available for public review for 60 days after sentencing and then are sealed. This report was sealed in early June.

Padilla, 40, was sentenced to 69 years to life by Judge Marco Nuñez on April 9. A jury on Jan. 28 found him guilty of a host of felonies in connection with the Nov. 28, 2018, incident that began about 8:30 p.m. when Calderon approached Padilla near the intersection of Ninth Street and Orange Avenue in Holtville.

After Calderon pulled up in his patrol car and got out, Padilla attacked him without provocation. Calderon was stabbed and beaten and at one point Padilla wrested away the deputy’s gun and fired it. Padilla then fled in Calderon’s patrol car and Calderon called for assistance.

Calderon suffered a broken jaw and facial stab wounds. He was flown to a hospital by air ambulance, treated and released several hours later.

Padilla was arrested without further incident a short time later inside a nearby church whose evening services he disrupted.

“It is upsetting to believe that my time as a peace officer will end because of the injuries I sustained from Padilla. I took great pride knowing I put criminals away for breaking the law and I had a part in keeping our community safe,” Calderon added.

The report also includes a statement from Calderon’s wife on the impact her husband’s injuries have had on their family.

“On Nov. 28, 2018, our lives were disrupted by the actions of Alex Padilla. On that day, Mr. Padilla violently attacked my husband, Mike, without knowing anything about him as a human,” Jewelissa Calderon told Singh.

“Mr. Padilla saw only a law enforcement officer, and nothing else. What Mr. Padilla did not know, or see about Mike, is that he is a husband, but even more importantly, he is a loving father of three. Mr. Padilla did not see, or know, that Mike is a kind, funny, easy-going, and compassionate person,” Mrs. Calderon added.

“The effects of the injuries Mike sustained that night are continuous, even to this day. My husband suffers from frequent neck and upper back pain, as well as visible facial damage. The pain that my husband endures due to Mr. Padilla’s actions, frequently affects the life of our family,” according to Mrs. Calderon.

“My husband now struggles to keep up with our daughter, due to the pain from the injuries he sustained. Mind you, our daughter is a very active toddler. While Mike is the type of person to power-through his pain, there are times that I can see he is pushing himself past his limit,” Mrs. Calderon stated.

“Our daughter was very young when this incident occurred, and it is saddening to think she will only ever know her father with his pain and limitations. In fact, our daughter will never remember her father without the scar and visible facial twitch. When our daughter touches my husband’s scar and says, ‘Daddy got hurt at work,’ it brings back all of the horrific memories and sadness from that day,” she added.

The injuries have been devastating to the now former deputy, his wife added.

“With his neck and eye injuries, it is difficult for me to imagine that my husband will ever be able to return to his position as a deputy. This was a job my husband loved. Mike has worked hard to put himself through college and to make a career and for himself,” Mrs. Calderon stated. “Before the incident, we had a pretty good idea of what our financial future was going to be. We felt safe and secure knowing we would be able to provide for our children. Not knowing the future of my husband’s employment, has created financial stress for both Mike and myself.”

She added, “Every time Mike feels the pain in his neck and back, or simply looks in the mirror, he is reminded of that day and the person who caused it. I humbly ask that the court consider the impact and long-term effects Mr. Padilla’s actions have had on Mike and my family’s life when he is sentenced to prison. The sentence of the court will never take back the actions of Mr. Padilla, but I whole-heartedly believe he deserves the maximum sentence possible for the long-lasting scars that he has left on our lives.”

Calderon eventually returned to work but his injuries caused him to be assigned to limited duty and eventually forced to him retire, Sheriff’s Lt. Jimmy Duran stated in a recent email.