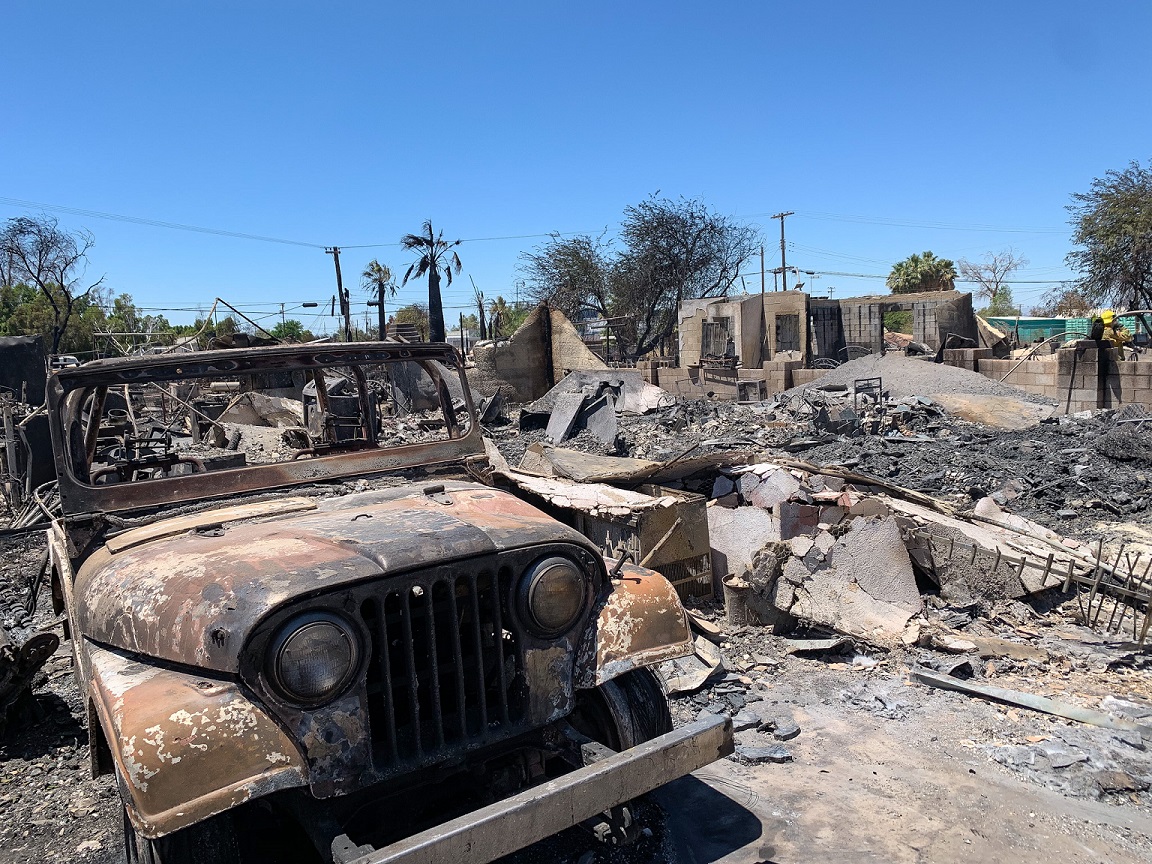 A burned Jeep sits alongside a destroyed home in Niland the morning of June 29, after a fire swept through much of the community June 28, leaving one dead, more than 150 people displaced and 40-plus families without homes. | CORISSA IBARRA PHOTO
Home
Regional News
In Regional News

NILAND — Many Niland residents returned home as the sun rose June 29 to a still-smoldering community praying for miracles.

“I’ve lived in this house since ‘79. My kids were born and raised here. The house is pretty messed up. Windows are out and glass is all over the place,” said an emotional Otis Parker standing in front of what was left of his smoldering home that morning.

Parker was still dazed from the five-alarm fire fueled by heavy brush and 35-mph winds that swept through the township June 28. The incendiary catastrophe destroyed more than 30 single-family homes and displaced 154 residents, or the about 43 families, Imperial County Fire Chief Alfredo Estrada said.

The fire started around 6:30 p.m. June 28 and both the cause and the point of origin were still under investigation, the chief said June 29.

Sadly, the remains of one unidentified individual had been found June 29 among the ruins of burned homes during what was likely ongoing site inspections that Estrada said were occurring throughout the day by county building officials and fire personnel, who were red-tagging homes and searching for remains, he said.

No other information on the remains were available as of deadline July 1, and county officials said the death was being investigated by the county Sheriff’s Office.

An assistant fire chief on scene July 1 said county officials were still searching the site for remains early in the day.

Meanwhile, Parker said he noticed the fire whipping up around 7 p.m., around the same time that Estrada said a third-alarm was sounded and firefighters were being called in from all over the county.

“I noticed the fire around 7 pm standing in my backyard,” Parker told a reporter June 29. “I saw the palm trees go up in flames (west of Highway 111). Then all of a sudden, when the wind came up, the embers blew everywhere and went into the grass, weeds and dead tree.

“It was just too late. I tried to put out little fires with a water hose but that ain’t no good. When the fire got too bad, I parked my truck across the street. I need to start looking for a place to stay in Calipatria or Brawley,” Parker said.

The fire is thought to have started around 6 p.m. west of the highway not far from the Niland Apartments at 17 W. Fourth St. Witnesses said the flames seemed to have a mind of their own, jumping over the highway and indiscriminately burning residences throughout the city with the help of high winds throughout the night. Third Street appeared to be the epicenter of the disaster from the looks of what remained June 29.

At the height of the fire, about 150 fire personnel were on scene battling the blaze, which prompted county officials to order the evacuation of 500 to 600 people, Chief Estrada said.

That was reportedly the entire population of Niland, which has steadily declined in population numbers over the decades. Some 1,200 residents lived there in 2000, with the population around 1,000 by the 2010 Census.

“My kids grew up here and I lived at this house for many years before moving to Calipatria. I started renting this house, but I had a lot of good memories here,” said Francisco Garcia on June 29, surveying the damage to his property two blocks east of Parker’s residence.

During an interview with a reporter, Garcia asked a nearby Imperial County official why he was taking measurements of the property. The official said he was condemning structures that had burned down, before taping a notice to a fence.

“All that is left of my house is the carport and the fence, but thank God no one was hurt during the fire,” Garcia said.

“We are fortunate because we didn’t have anyone living in the home when it burned down, but there were things in it that can’t be replaced. It’s an older family home build by our grandfather in 1957,” said Vanessa Kadiz, whose family owns the property next door to Garcia.

Kadiz rushed down from Colton on the morning of June 29 to support her family as soon as she heard news of the fire.

“Unfortunately, there is nothing left of the house, but we are going to try to salvage what we can,” said Kadiz, sitting on a bench in front of the her childhood home, reminiscing on all that had gone up in smoke.

The Ruiz family got good news the morning of June 29, when they found out the apartment complex they live in was saved by firefighters. They posed a photo in front of their home June 29. It was just a hours earlier that the family feared all was gone when they were turned back from Niland the evening of June 28 and sent to an evacuation center at Erickson Gymnasium on the campus of Calipatria High School.

“We are so relieved that all of our stuff is OK. Pictures and everything that is irreplaceable is OK. We are not staying here tonight in case the fire starts back up, and we are collecting important paperwork just to be safe,” said Monica Ruiz, who expressed her sincerest gratitude to the firefighters who saved her home.

Although social media reports were that the apartment complex near where the fire started was burned, Chief Estrada said firefighters saved the complex. All the structures that burned to the ground were single-family swellings, he added.

Monica Valdez, matriarch of the Ruiz family, was interview outside Calipatria High School around 10:30 p.m. June 29.

“I’m pretty sure my house did burn down. I lived in the Niland apartment complex and was not home when the fire started,” said Valdez at the time, after she was turned back before entering Niland when she attempted to go home.

“We’re hoping that after everything calms down we can go back tomorrow and see what happened, but we don’t know yet,” said Monica Ruiz had said earlier.

Imperial County Supervisor Ryan Kelley, who was at the scene of the evacuation center late June 28, personally paid for hotel rooms for 12 to 15 of the families who lost their homes in the fire, an American Red Cross official said that night. Kelley would speak with a reporter later that night.

“The Red Cross is making arrangements. I went to help to get some rooms in Calipatria and made those available to Red Cross. The Red Cross also has a bank of rooms in Brawley and they are trying to (get) all these people into some kind of room tonight and will get them assistance for the next few days,” Kelley said.

“The county of Imperial is addressing it by already, starting a program of how our disaster assistance can quickly start, some housing assistance, mobile-home replacement programs, and other things that we can do quickly,” Kelley said.

“I brought three families to my house in Calipat because they didn’t have a place to go. I called (Calipatria Unified School District) Superintendent (Douglas Kline) and asked him to open the high school gym. We contacted the Red Cross and we made contact with our high school principal and coordinated to get this open,” said Maria Nava-Froelich, director of the Calipatria-Niland Family Resource Center.

“We work with local agencies to ensure our residents are taken care of during disasters. As soon as the fire came about, we received a call from our national dispatch letting us know there was a major fire and they needed volunteers,” said Jose Ortega, Red Cross disaster program manager, from the high school staging area.

“We currently have three teams dispatched. We have what we call a canteen team that provides meals and hydration to the fire departments fighting the fire. We have a temporary evacuation point at the Calipatria High School providing a safe location for residents,” said Ortega at as he rushed to assess another displaced family.

Niland resident Katherine Nigos was visibly shaken when she spoke with a reporter from the evacuation center June 28.

“There was a fire in the field behind the Niland apartment complex, the apartments where we live. The entire apartment complex was burned down and over half of Niland has burned. Everybody is without houses. We have no place to stay tonight,” Nigos said while waiting to be assessed by Red Cross officials.

Nigos was home when the fire started.

“We saw the fire in the field behind us and all we could do is get our kids and get out of there. All we could do was grab what we could carry and get in the car, or else you’re gonna burn with it,” Nigos added.

Nigos has five children and stayed in a room provided by Red Cross.

“I hope they can help, especially people with children, with a place to stay, food, shelter. At this point, everybody has nothing, over half the town,” Nigos said when asked what county officials could do to help families displaced by the fire.

Around 2 p.m. June 29, the county of Imperial, working with other local agencies, opened a Local Assistance Center to assist individuals and families displaced by the fire. An LAC is a one-stop-shop with critical government and support services for residents impacted by the fire.  Representatives from the Imperial County Department of Social Services, Public Health Department, Behavioral Health Services and Workforce and Economic Development Services joined those from Clinicas De Salud Del Pueblo Inc., Comite Civico del Valle, Campesino Unidos and American Red Cross to work with the displaced families to address their immediate needs. The LAC was located inside Wirt Auditorium on the campus of Calipatria High School, 501 W. Main St.

Previous
Central American Refugees and Their Problems Compound at the Border