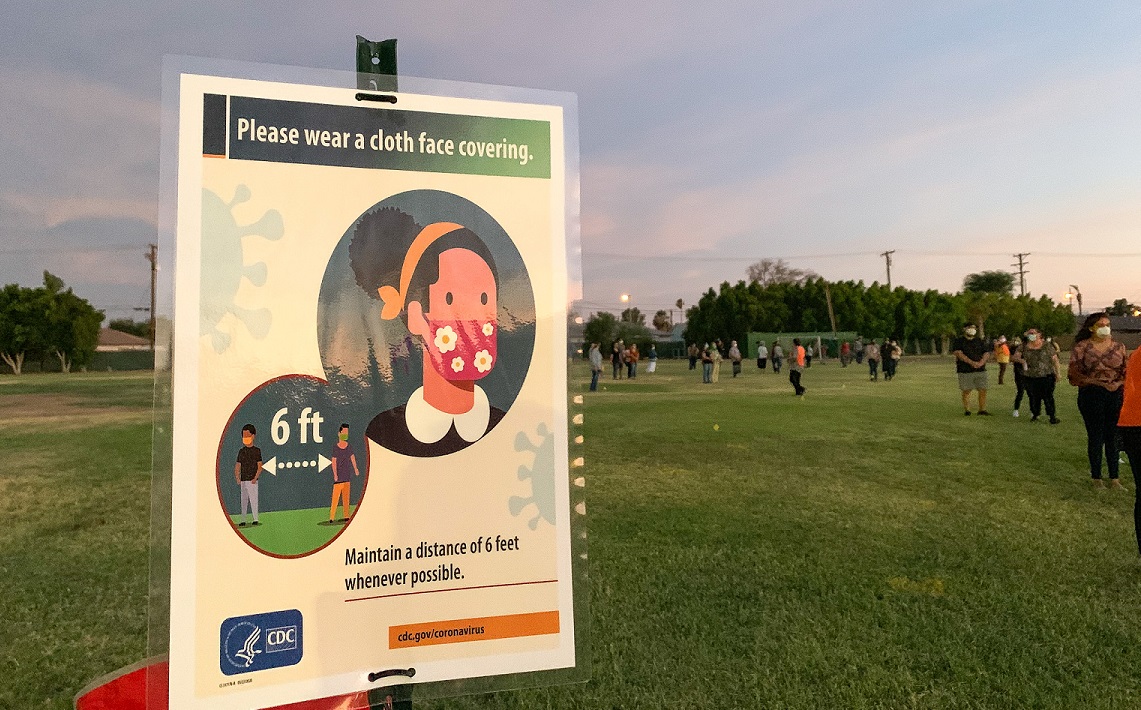 A Centers for Disease Control and Prevention sign is posted outside St. Mary's Parish in El Centro warning participants to take precautions due to COVID-19. What were supposed to be full-blown outdoor Masses in Holtville and El Centro the weekend of June 27 and 28 were quickly downgraded to minutes-long "absolution services" in those communities after Gov. Newsom's live press conference June 26 asking Imperial County to "toggle back" to Stage 1. | CORISSA IBARRA PHOTO
Home
COVID-19
In COVID-19Local NewsRegional News

IMPERIAL COUNTY — What was supposed to be the first in-person Catholic Masses performed in Imperial County since the COVID-19 pandemic began were quickly downgraded to quick “general absolution and Holy Communion” services in El Centro and Holtville the weekend of June 27 and 28 after Gov. Gavin Newsom’s June 26 press conference in which he warned the county to “toggle back” amid spreading cases of coronavirus.

St. Mary’s Parish in El Centro and St. Joseph Catholic Church Holtville had planned for a series of outdoor Masses over the weekend, the first such allowed by the San Diego Diocese of the Catholic Church, which oversees Imperial County, but plans were quickly changed at the last minute.

Representatives of Our Lady of Guadalupe Catholic Church in Calexico were contacted earlier last week, and no in-person services of any kind were planned.

Still, that did not dampen the spirit of many of those who attended the short religious events, many of whom say they craved the spiritual food from being together with fellow parishioners. Even though churches in the county have been allowed to conduct limited in-person services for a couple weeks now, many, like the Catholic churches in the Valley, have opted to continue online.

Magdalena Vasquez of Holtville said, “Every day I wake up it is a grace that the Lord gives me,” expressing her great joy after having attended the June 27 8:30 p.m. service.

Arnulfo Vasquez, Magdalena’s husband, added, “We miss it,” after being asked how he felt about Mass being cancelled.

“It is a privilege, a gift for me, because I would attend Mass every day. I suffered at first, but when I was contacted (June 27), for me it was a victory,” Alfonsina Gildnerd said.

She commented how appreciative she is of St. Joseph priest Father Jose Moreno for the drive-through Eucharist he performs on Sunday mornings.

Father Moreno “demonstrates his love for the community and blesses us with the Eucharist every Sunday at the (church) corner, (and) does it with so much love,” she said.

When Gildnerd found out Mass was canceled, she said, “I had to talk to the father, this cannot be. It hurt.”

Parishioners of St. Mary’s expressed themselves after the 8 p.m. service June 28.

“I think it was the right thing to do … the way they set it up, it was a good distance for everybody, it was more safe,” said one St. Mary’s member who asked not to use her name. “It’s good to be back to reunite spiritually, but it’s hard.”

Carlos Gerardo of El Centro said, “How they did it here, I think it’s pretty good. It’s much better, for right now.”

When Maria (who asked not to use her last name) heard that Mass was canceled she “felt like someone took away (her) breath.”

After a two-week delay, June 27 and 28, was supposed to be the return of in-person Catholic services in the Valley, St. Mary’s Father Mark Edney said. He said a May 27 letter from San Diego Diocese Bishop Robert McElroy wrote to priests in the area that June 8 would be the return to worship services for the county, but that was delayed to this past weekend.

“Our first priority must be to safeguard the physical as well as the spiritual health of our people, and at this time a delay of two weeks is necessary to accomplish that goal,” McElroy wrote in his letter.

Throughout week Edney had been taking sign-ups for Mass via his El Centro Catholic Facebook page, where he had intended to gather no more than 300 parishioners per gathering.

Spots were painted on the field to maintain a safe distance the evening of June 28. An estimated 160 parishioners showed up for the Spanish-language service.

When the short service concluded, church staff signaled when they could proceed to the exit and to their vehicles.

Edney said there are about 4,000 Catholics between St. Mary’s and Our Lady of Guadalupe Catholic Churches in El Centro.

“Our people want to celebrate Mass but COVID-19 is still not under control,” Edney said. He is supporting the community and the situation has made it feel “like a roller-coaster ride” going up and down.

In Holtville, four services were to be held over the weekend. A total of 60 parishioners showed up to two services June 27, Father Moreno told this newspaper.

Red crosses were painted on the grass outside St. Joseph, spaced to follow social distancing recommendations.

Those who attended had their name checked by the gate entrance and received hand sanitizer. Once cleared to proceed to the grassy area, parishioners selected which red cross to stand on. After the short service concluded, parishioners left one by one through another gate.

Father Moreno said he will continue to bless those who drive by Sunday mornings by the church.

Next
Nilson ‘REACH’-es For His Dream Job, Saves Lives Daily